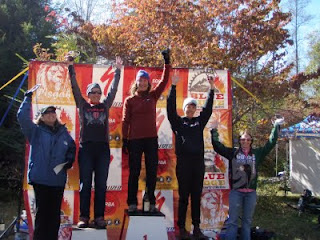 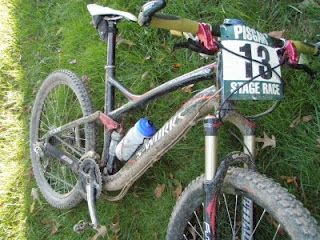 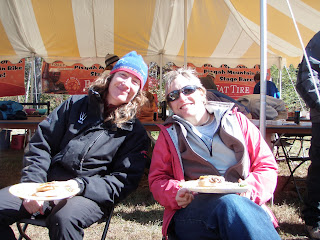 I woke up feeling like a train wreck. The last time I experienced this feeling was Stage 6 of TransRockies. I am not sure why. I did everything right after yesterday's stage. I made the coffee stronger, hoping to break down the cobwebs in my head.

Today's start was cold, but dry. However, Todd announced that he had been up to Farlow Gap at 2:30 am and was greeted by snow and ice. Fearing riders' safety, he asked us to decide to take out this section or not. After 3 days of extreme weather conditions and a brutal course, not one racer wanted to tackle an icy Farlow. This would shorten the course by 8-9 miles. O.k. by me as I still felt like crap at the start.

After the 1/2 mile neutral start, I hopped on Cheryl's wheel and we began with a 6 mile gravel climb, followed by a short rolling section, and then a quick descent down to Hwy 276. The pace was hard; close to my breaking point. I stayed with her until the top. It was here that my legs died. The descent was soft and had lots of loose gravel, so I had to push hard even on it.

A short pavement section brought me to the next gravel climb. Ughh! It was here that I was passed by Sue first, then Brenda. Was I pedaling backwards? Sure felt like it. I struggled to maintain my speed. After some more rolling sections, I hit the Cove Creek Trail. Back in my element, I was able to kick it up a bit. Soon I passed Brenda and then hit the connector trail over to Daniel Ridge Trail.

After riding just the last little bit of Daniel Ridge, I was once again back on gravel. I was able to big ring it on the Davidson River Trail. Then back onto MORE gravel road where I retraced my steps to get back over to the other side of Hwy 276. Brenda passed me here like I was standing still. It seemed effortless for her, as she would stand and climb up the mountain like it was just a hill. She was strong today!

And so it went like this for me the remainder of this stage. I suffered on the roads and enjoyed the singletrack. Bennett Gap Trail was super fun! After the rock ledge drops of death (which I scooted/slid down, I enjoyed the fast and flowy descent back down to the riding stables. I caught Brenda here again.

The last gravel climb to Black Mountain seemed like an eternity, although it was only 30 minutes (should have been 20). Brenda passed me for the last time today and I did not see her until the finish. Once again, Ienjoyed the last 2 mile descent to the finish. Cheryl was able to maintain a strong pace today and put enough time on me to take 2nd.

I was frustrated not to be able to maintain my second placing. But that's racing. Cheryl was able to overcome a slow start and finish strong. But frustrations aside, I had a blast. I loved the course, except for the 30 miles of gravel roads on the third stage. Not only did the singletrack test your skills, but the weather tested your ability to adapt and overcome. Surprisingly, the attrition rate was low; I guess the racers knew what they were getting into when they signed up.

The course markings were superb, the volunteers were awesome. One thing I did miss was the post-stage camaraderie. Everyone was quick to high-tail it out of there and go their separate ways. At least the sun shined on the last day, so that people hung out at the finish and the awards ceremony.

Thanks to Specialized for an awesome ride aboard my Stumpjumper. Stumpy climbed like a goat and flew on the descents. The only limiter was ME.

Through all the rain, snow, and river crossings, Chamois Butt'r kept my taint comfy.

My green Ergon GR2 carbon grips kept the numbness and ulnar pain away, yet allowing full control on those nasty descents.

My Magura Marta SL's were superb. One set of pads for the whole race, no fading on those long, ugly descents, and superb control.
Posted by Carey Lowery at 8:52 PM
Email ThisBlogThis!Share to TwitterShare to FacebookShare to Pinterest