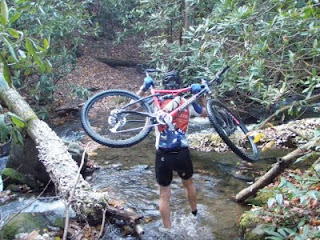 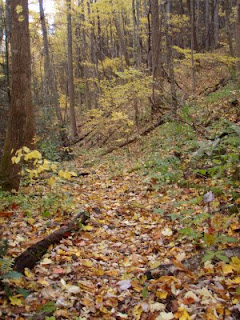 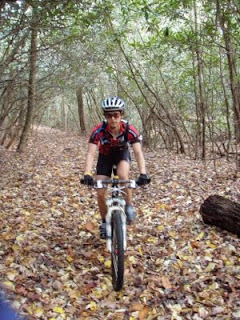 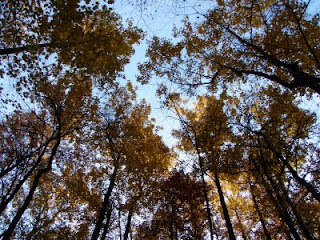 With Carly's ear infection being cleared up with antibiotics, Reese recovering from oral surgery, and Charlie busy working, I decided to take a little hiatus from reality and do some exploring. Zeke, as usual, is always up for riding new trail. Today was going to be all about leaf-watching, the non-couch potato way ... on two knobbies!

I picked out a horse trail on the National Geographic map and met Zeke up at the fish hatchery this morning at 9:30 am. Blustery winds, but temps in the upper 60's awaited us. Ahh, heaven! With Stumpy at the spa and Indy on vacation, that left Crash ('06 Epic) for 'splorin' duty today. I had just mounted some super heavy tires, was running my PowerTap, and had stuffed my saddle bag until I could just barely close it, so her normal weight of 24 lbs swelled up to 27 pounds.

We began with a climb up a fireroad that was so littered with yellow, red, and orange leaves that it narrowed the roadway down to just double-track width. The smell of fallen leaves were so rich that it had a mind-numbing effect on me. Just what I needed as my week had been full of drama.

After about 7 miles, we crossed a creek, and began following the Bald River along the horse trail. At first it was pleasantly level and smooth. It was here that we ran in to a couple of deer hunters; very friendly guys who did not see anything today. One of them took a 12 pointer here last year. Hmmm ... should I or shouldn't I tell Charlie?

Soon we saw sign of wild boar. They had really chewed up the trail, making it difficult to ride in places. After a couple more river crossings, the trail began to climb steeply. If I had been riding a horse here, I would definitely want a seasoned one, as the trail had lots of loose moss-covered baby head rocks and log crossings.

There were plenty of hike-a-bike sections and at one point I was looking for a Pisgah National Forest sign. Gee, even Tennessee has its own Farlow Gap! It was slow going for most of this 6 mile trail, but I enjoyed it. There was just nothing like watching Zeke's butt and his "holey" shorts mile after mile.

But really, I treasure the "me" time I get to have while exploring new trail. I am going slow enough that I don't have to think about where my next move is going to be, so that I can drift off in to my own little world of daydreams.

When Zeke said that his altimeter read 3300ft and there was plenty more mountain to climb, I began to think that maybe next time we should ride down this trail. And then I thought how much fun to bomb down this on an S-Works Enduro, that weighs just as much as my Epic now, but with 60mm more travel.

Popping out onto another fireroad, our exploration was soon to come to an end. This road led to one that I was familiar with, except that this time the forest service decided to lay down about 2-3" of large gravel ... the whole way down the mountain. Great! It felt like I was riding on a bed of marbles for 5 miles.

Where will be my next adventure?
Posted by Carey Lowery at 4:57 PM
Email ThisBlogThis!Share to TwitterShare to FacebookShare to Pinterest

We toped out at 4,960 feet after a climb up an insanely steep and deeply graveled fire road . I think we could tie this togather with our Wiggs Meadow loop for a 60 miler .Wiggs sets at 5,180 feet . OR we could do this with our 80 mile 8,000 feet of climbing ride that includes Hanging Dog's single track for a 100 mile joy ride. ----- Zeke