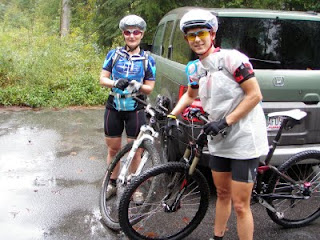 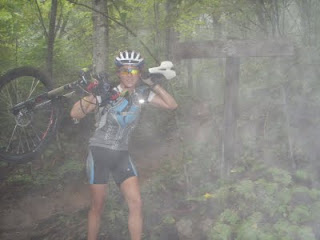 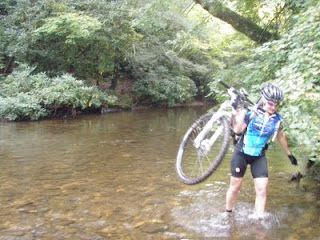 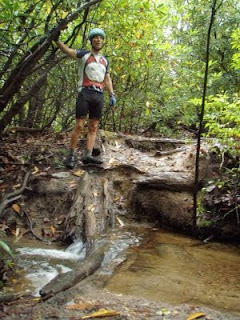 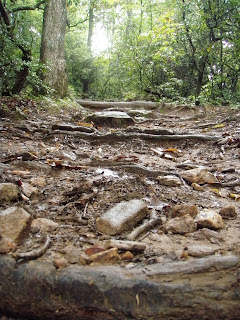 On Wednesday, Zeke, Ursula, and I headed to Brevard to check out the course for the Pisgah Stage Race. What better way to dial in our skills than in the rain ... at least it was warm.

The first day we got in 5 hours of riding. Squirrel Gap Trail was especially technical with miles and miles of off-camber bench cut singletrack. The roots were slick and it reminded me of the rooty section on Old Copper Road. The Specialized Captains hooked up well. I kept it light on the braking and was amazed at how little I slipped.

I must have touched Danielle's knee while at Shenandoah, because around mile 30 my IT band flared up. I have not had this issue since 2007. For the remainder of the ride I had to take it easy ... yeah, right! In Pisgah, that is impossible.

The second day we got in 5 1/2 hours of riding. Today, the rain held off, but the trails were still slick. Turkey Pen Gap Trail was exhilarating on the downhills and much of the climbs were hike-a-bikes. The descent off Vineyard Gap Trail required total concentration, but was sweet! Riverside and Bradley Creek Trails were flat but filled with rocks, roots, and river crossings.

Foolish me thought we would be able to ride the course in its entirety. These routes are massively epic. With Zeke's knee and my IT band giving me problems, we had to back off the intensity. So the first two days, we covered about 2/3 of Stages 2 and 3.

The third and final day, we rode the beginning of Stage 4 and the tail end of Stages 2 and 3. A little over 4 hours of riding. The fire roads held up very well with all the rain. Although a bit soft, they were not muddy.

Avery Creek Trail had a small river running down it and the rocks were loose. I figured the flowing water was the best line ... and it was. The signage for this trail actually said EASY. There is nothing EASY about Pisgah! Multiple creek crossings, slick bridges, and thousands of roots made it tough, but fun nonetheless.

Bennett Creek Trail followed a ridge for awhile with sick rock drops, short, steep hike-a-bikes, and one heck of a blazing fast descent!

We finished the third day with the descent off Black Mtn Trail. By far, one of the funnest trails. Kudos to Todd for letting us finish each stage with this awesome descent. I think I was giggling the whole way ... although I passed on the 10 foot gap jump over the creek.

The Pisgah Stage Race is going to be one tough son of a gun. The mileage may not look impressive, but the singletrack is grueling. It requires total focus 100% of the time or you will be headed to the hospital. There are no buff trails here.

Todd was wise to shorten the stages. I did not find this out until I had gotten back home from the recon. While doing this pre-ride, I was thinking that there will be a lot of people in over their head with this one. But the new course routing will make it much more doable.

Ursula is going to pass on this race; she did have a blast and came out of it with some new skills. But she does not feel she is ready for this beast.

I think Zeke was wondering the whole time why he volunteered for this recon. With the rain, the roots, the treacherous descents, and his nagging knee, he did not have too much fun.

Me, I was in heaven. So what if it was raining. So what if my IT band was hurtin.? So what if I did not clean everything. Pisgah made me feel alive!

My Specialized Stumpjumper is the steed of choice. It handles the descents with finesse and climbs like a goat. With its slightly longer wheelbase and slacker angles (as compared to the Era), I was much more comfortable riding the descents. And since it only weighs 23.5 pounds, that makes the hike-a-bikes a bit easier.
Posted by Carey Lowery at 12:44 PM
Email ThisBlogThis!Share to TwitterShare to FacebookShare to Pinterest

This should be a good one. It's hitting all my favorite trails in Pisgah. I didn't know the stages got shortened, I'll have to go check and see what got taken out!
I'm just happy I won't be racing in your category!