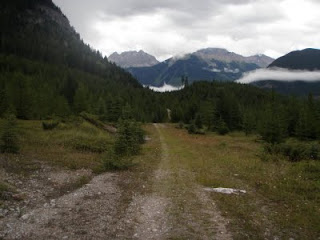 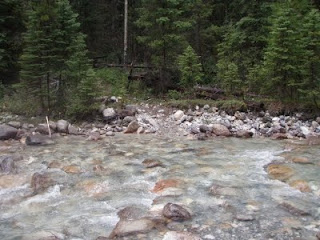 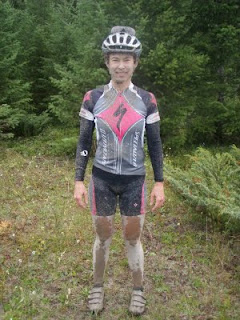 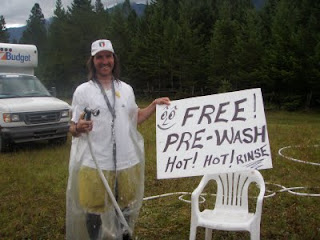 This morning I awoke with cobwebs in my head and some noticeable fatigue in my legs. Nothing that 2 cups of Kickin' Horse Kick Ass coffee could not fix! I wish I could buy this coffee here as it is stout but smooth.

At 8am, the cloud cover was low and thick and rain was imminent. Zeke and I were in the second starting block, so we had to make our way through some of the slower folk to catch back up to the leaders in our group.

This year a climb at the beginning was omitted. Instead, we hit some lumpy, bumpy singletrack and doubletrack to the daily dose of logging roads. These meadows we went through had dips in them just the right size to swallow my 26-inch wheels. A couple times I came to a dead halt when both wheels fell into these holes at exactly the same time. Frustrating, but I could not help but laugh out loud.

Zeke and I were motoring along pretty good and had caught up to the leaders. We were riding in a pack with the top 3 teams in our division. Hammering down a fireroad at about 30kph, we saw an arrow to turn left. So we did. After about 1km, we stopped seeing tire tracks. Due to the muddy roads we were riding, this was pretty obvious. Uh oh! We turned back and when we came to that particular intersection, we discovered TWO lefts; one was a hard (almost double-back) left and the one we took was a more gradual left. The ONLY time I was thankful that we were riding muddy roads.

So then we slowly had to play catch up to the teams that passed us. And we eventually made it back up front. At the first checkpoint, all the top 5 teams were here. It was quite comical to watch our competitors frantically race around refilling bottles and grabbing food. Team Cox made it out first, with Zeke and I close on their wheels.

From here, it was a bit of more logging roads followed by doubletrack to the first bit of today's singletrack at 37km. Going into this trail required some skill as it was tight, off-camber, and loose ... but amazingly dry. Zeke took a fall on one descent; from there he slowed significantly. A couple hike-a-bikes did his knee in, for the day.

I rode most of this singletrack, about 4km in length, alone. When I popped out onto some tight doubletrack, I waited on Zeke. While waiting, I watched as all our competition passed me. I really did not like that feeling. I asked about Zeke; they said he was hurting, but pressing on. After about 15 minutes, Zeke appeared. I could tell he was upset. After some discussion, we decided that I would race on alone and Zeke would continue on to checkpoint 2 and call it a day.

With legs feeling pretty good and zippity after 2 1/2 hours of warming up, I decided I would try to catch those who passed me. I enjoyed the doubletrack descent to another 3km section of singletrack. When I pulled into checkpoint 2, I told them about Zeke. She asked who I was going to ride with and my reply was, "Whoever can keep up." She said that I needed to stick with a team. So I initially hooked up with Wes and Roger.

We slowly started the 10km climb up to LodgePole Pass. And then the morning clouds gave way to pounding rain and much colder temperatures. Brrr! But this forced me to up my pace to stoke the engine and keep me warm. When the climb pitched up to 15%, my legs died. I managed to suffer through, only to have to slog my way through 1km of muddy, slick, steep hike-a-bike. Even the moto guy had a hard time with his bike. As he passed, he asked me how I liked his rendition of a roto-tiller.

I caught up to the Tinhorn Creek guys at the pass. Thank God, for I knew that the next 53km descent along muddy dirt roads was going to be a testament of will power and perseverance. Two more guys joined us. It was still raining ... and bitter cold. But to lose contact with the wheel in front of you meant for a long ass, miserable solo ride into Whiteswan. So I hung on for dear life ... on this long ass, slightly less miserable group ride to the finish. And yes, I did my fair share of pulling as well.

I rolled across the finish line just a few minutes after the leaders in my class did. However, since I rode in alone, we were assessed the maximum time penalty of 12 hours. Oh, well, I still had an excellent ride.

Now came the time to worry about Zeke. Did he truly stop at the second check or was too bull-headed to stop? How was his knee? Would he be able to ride any more stages? Man, this sucks. Here we were, both physically and mentally prepared to do battle for 7 days, and 1km on the first day took us out of the picture. How quickly something so good can go so bad.

Cold and muddy, I hurriedly grabbed my shower bag and headed for the truck. Crazy Larry was there, spraying us down with warm water, getting most of the mud off of us before we entered the shower truck.

At dinnertime, Zeke still had not arrived. After dining on feta and spinach stuffed chicken breasts, rice, and vegies, I grabbed a plate for Zeke. Upon finding the race director, I asked for Zeke's whereabouts. I was told that he was about 20 minutes out. Apparently, he was on the last SAG wagon and they had to take a racer who had broken his wrist to the hospital. Poor Zeke! He spent an unbelievable amount of time out there waiting/standing around ... on a bad knee.

Zeke finally arrived at 7:30pm. He was pooped and frustrated for "letting me down." I told him over and over that it was not his fault. This was racing and sometimes the outcomes were not good. And I was frustrated for the bad luck that Zeke had experienced. I could lay down and cry ... or I could stand up and fight. I may not be racing for an official first place, but I was still racing!
Posted by Carey Lowery at 3:26 PM
Email ThisBlogThis!Share to TwitterShare to FacebookShare to Pinterest

As an athlete,I must say abandoning a stage is as bad as it gets . You never leave your team-mate,much more your best friend on the field . This was as bad as the day in Austria I skied off the mountain after cracking my right fibula . At least that day I avoided the med-sled . The worst of all worsts was looking Carey in the eye ! --- Zeke