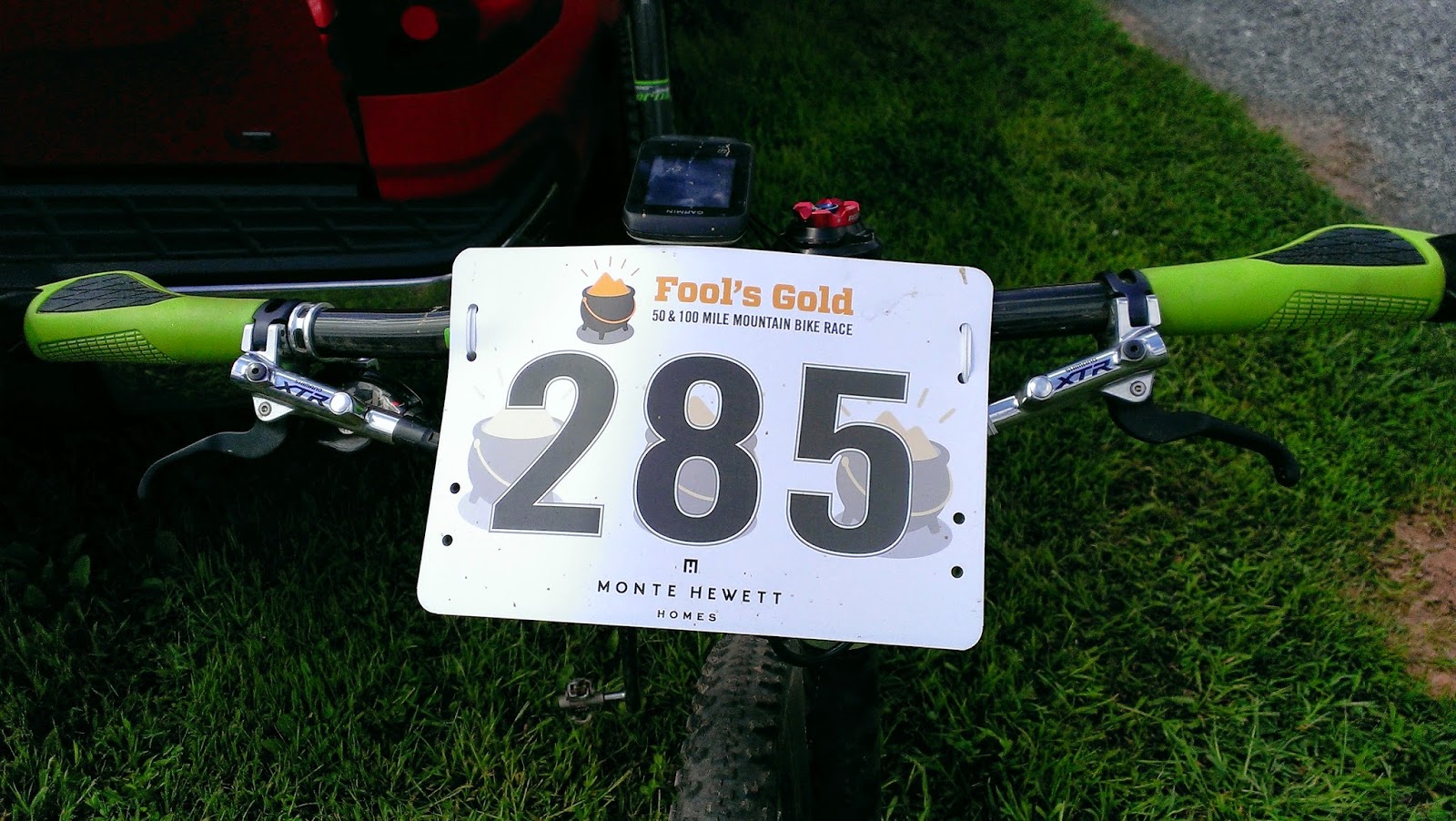 It could not have been a better weekend to race the gravel and singletrack around the Bull and Jake Mountain area in Dahlonega, Georgia.  Temperatures were perfect, the humidity was low, and the trails were in primo condition, thanks to the collaboration between SORBA and CHTA (Chattahoochee Trail Horse Association).

I did what I could to recover from last weekend's double header.  8+ hours of sleep per night, eating clean, sitting as much as possible at work, and just tooling around on the bike.  The legs actually felt pretty good race morning.  I had planned on getting in a solid warm up, but due to the 7:30am start and forgetting to bring lights, I only got to pedal around for 15 minutes.  Oh well, Lisa said the first 2 miles would be neutral.

Shoulda known better about the start being "neutral," as Lisa was driving the lead vehicle.  Lisa does not know slow.  Her neutral was 25mph ... uphill!  I was on the gas right from the get-go, and the legs were NOT happy.  My plan was to stick with the lead group to the first big climb and then settle.  I was on the rivet the whole time, precariously hanging on at the back.  I was able to draft off the big boys and that bought me some precious time.

Once on the gravel, I let the group go.  I knew that over the next 50 miles, I would see some of them again.  Bonnie and I rode together for awhile.  I was happy to pace off her, steady and consistent that she was.  We chatted a bit; she gave me some kudos that were much appreciated.  I'm not sure if this fueled my engine or if that she slowed down a bit, but halfway up, she came off my wheel.

I enjoyed the climb up Cooper's Gap, feeling my legs come back around.  At the top of Cooper's Gap, I saw what appeared to be some volunteers setting up.  Questions swirled in my head.  Was this the first aid?  Was this an added water stop?  This was only mile 10,  The first aid station was supposed to be at the top of Winding Stair at mile 18.  Confused, I pedaled on.  My plans were to do a bottle swap at the first aid.  Hmmm.  If that was the first aid, then this bottle would now have to last 29 miles.  Thankfully the weather was cool and I was not drinking much.

I raced along the ridgeline, making short work of the rollers.  Coming into the Winding Stair intersection, I made a conscious effort to ride smart.  This descent was steep, loose, and rutted.  The corners were tight and I did not want to end up as someone's hood ornament.  Halfway down, I thought I felt my rear getting squirmy ... not another flat!  I slowed enough to cast a quick glance down.  The tire appeared o.k.  My mind and the loose terrain was playing tricks on me.

Finally the turn to single track nirvana!  Turner Creek was a descender's dream.  It was all about letting go of the brakes and carving the turns.  It was here that a racer from Florida (J.C. was his name, I believe) followed my wheel.  I asked him if he wanted by, but his reply was that he was happy following my lines.  He gave me some nice comments on my skills.  Greatly appreciated, as alot of times, dudes usually don't dish out nice words to us ladies.  He later came up to me at the awards ceremony and asked if he could get his picture with me!

Popping back out on some gravel, I pedaled back up FS 77 and then turned onto Jones Creek Trail.  I grabbed my bottle to drink only to find it dry.  Three miles to the second aid station ... no worries.  The climb up was pleasant.  The last time I had done this race (2012), this climb was a steep washed out mess!  It was here that last weekend began to catch up to me.  The first feelings of "heavy legs" began to settle in.  I was happy to see the top and even happier to rail the following descent; well, all but the first switchback which I overcooked.  After the dam began the triple "ant hill" climb.  Zeke named it this after following me up this sandy climbthis back in 2008'ish.  I was going too slow for him and he ended up falling over into a mound of ants which then proceded to bite him repeatedly.

Fortunately for me, there was no one in my way and I was able to grunt my way up.  The legs came close to crying, "Mutiny!, but abated when I explained that a fuel resupply station was just up ahead.  As I came rolling in, the volunteers were shouting out our number plates so that our bags would be ready.  Andrew helped me with mine and I was in and out in a flash.

Washing down a couple gels with Skratch, I was ready to begin the hardest portion of the course, the Bull Mountain loop.  In 2012, I cramped badly here.  I hoped by using a combination of Skratch and Elete electrolytes, I could avoid a repeat.  Getting back up to speed, I began passing many of those who sprinted up the Cooper Gap climb, only now to be feeling the effects of there early race "squirrely-ness."

My Niner Air 9 RDO, weighing in at 19 pounds, felt great underneath me.  Every push of the pedals engaged the Industry 9's immediately and no energy was lost.  I had a couple of riders around me, going at the same pace.  We helped to motivate each other, grinding away on the 3 kickers leading to the top of Bull.  Once on top, we parted ways.

Once I saw the cairn and then the old truck, I knew it was all downhill to the third aid station.  With no one in front of me, I let it loose and enjoyed the ride.  I passed Mark towards the end; he was walking his bike.  I could not see what was wrong, but was going to fast to get into a lengthy discussion.  I just hoped that it wasn't a race ender.  Glad to see that he indeed did finish.

Emily helped me at the third aid station and got rolling in no time flat!  From here, was a little more gravel and then onto the Bull Mountain Connector Trail.  This was my least favorite, as it was riddled with roots.  My legs were tired, my butt was tired from being jack hammered on Bull, and I was ready for flowy and buff.  "Soon, little grasshopper, fast and flowy, it will be," my inner voice whispered to me.

I had now been on the bike for 4 hours.  I was tired, ready to be done, my little bubble of happiness had burst.  I threw a little pity party for myself.  And then I got my head back into the game.  The last bit of single track, the Jake Mountain and Black Branch Trails, were perhaps the funnest of all.  It was all downhill, or at least it seemed that way.  And as smooth as a baby's butt.  I realized I had a bit of fire left in the legs.  I enjoyed every bit of it, including the creek crossing, which I walked.  Oh, how soothing that was to my feet and calves!  I wanted to lay down and let every inch of my body enjoy the cold water.

Even the steep grunty climb afterwards could not dampen my spirits.  From there it was onto the Beaver Pond section, where I felt the single track love.  I passed a couple more dudes here, whose gast tanks were on "E."  I stopped at the last aid station and grabbed the final bottle.  Even though this race is called the FG50, it is really 54 miles.  I knew I would need this last bottle to get me to the finish, 7 miles away.

Back onto the gravel, I knew it was 4 miles of road, dirt and blacktop, to the finish.  If you let it, this section can feel like you are riding through quicksand.  I chose to see it as a 20 TT.  Putting my head down, I focused on turning the pedals over.  I had thoughts of 2nd just behind me. This game I played allowed me to work through the burning that built up in my legs quickly.  The small rollers became mountains, but then I chose to stand and hammer, imagining I was on my single speed.  Using this imagery allowed me to make short work of what could otherwise seem like a never ending stretch.

Coming into the winery, I was happy to see the Kenda finishing banner.  I rolled through in 4:42;09.  Normally after I finish I head to the car and get cleaned up.  But today I rolled into the food tent and devoured a watermelon!  That is the perfect immediate post race food!

Congrats to my team mate Mary for finishing second!  The week previous she said she and Randall were just going to "ride" the course and partake in the aid station festivities ... yeah, right!  Her first time on this trail system and she rocked it!

Lisa did a great job with this event.  Moe's catered the post race meal.  It all looked wonderful, but I opted only for the guac, which I got a huge plate of.  I figured that this was a pretty safe bet and that I would not be glutened.  800 calories of green goodness down the hatch.  There appeared to be plenty of sweet tea and ice cold beer as well.  Payouts were equal and went 3 deep; prizing went even deeper!  A cool T-shirt and finisher's glass rounded out the schwag.


Lisa, of Mountain Goat Adventures, once again put on a top notch race.  With her, you not only get a great race, but an overall great experience.  Sure, there were some glitches (aid station #1 at wrong spot, stolen course markings), but she did everything in her power to make everything go right.  I would highly recommend any of her races; she also has a trail running series.  I am looking forward to Southern X. 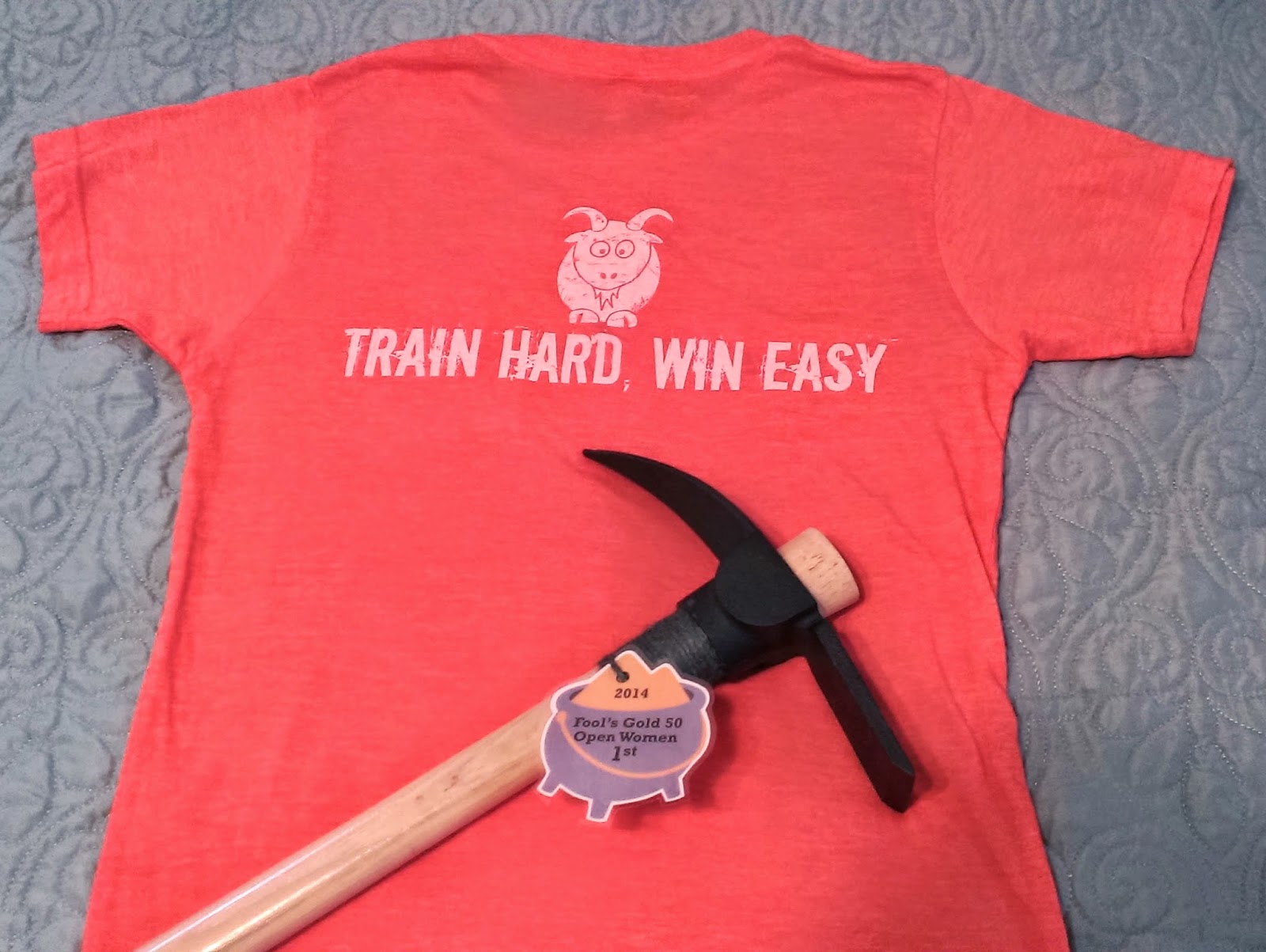