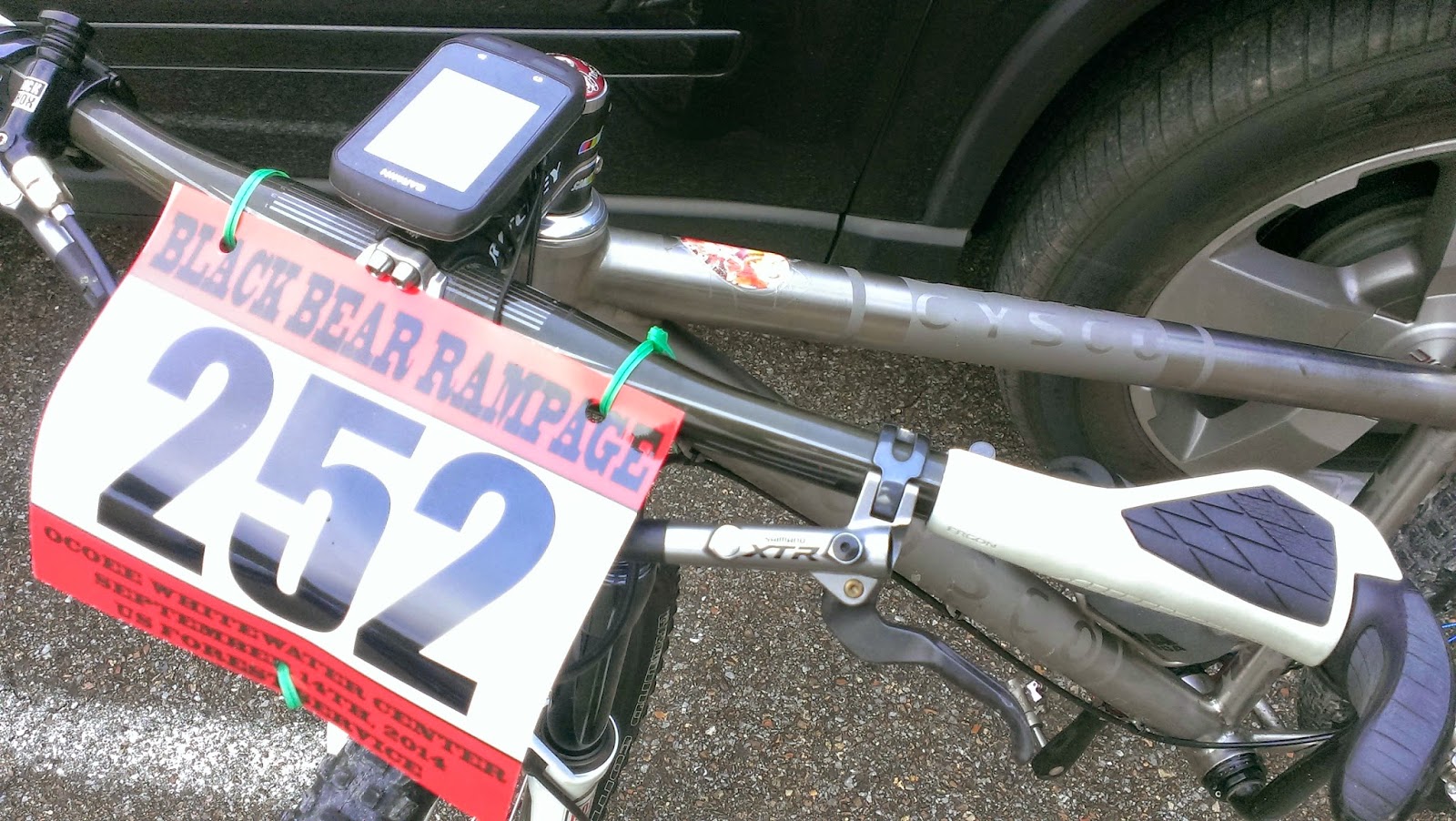 After the Pisgah MonsterCross, I had the daunting task of recovery.  The following day I would be racing the Black Bear on my single speed.  In preparation for Double Dare, I needed to have that feeling of racing back to back races.  My recovery plan included eating, soaking the legs in the Davidson River, stretching, eating, compression socks, foam rolling in the Wal-Mart parking lot as Zeke pumped gas, eating some more, and sitting in my Elevated Legs.  With all that accomplished, I was still able to make it to bed by 8:45 pm.

The morning of I felt pretty good.  No cobwebs in the head, a hearty appetite, and the desire for the speed.  I allowed my body a full 1 hour warm up.  That was indeed the ticket, because when the gun went off, the legs were there.  They were not sparkly, but I was able to keep up with Mary's pace, and soon we were reeling in the rear end of the Expert field, single speeders included.

As we approached the single track, I kicked it up to 160 rpm to get around a couple racers.  Mary allowed me the hole shot as she was content to ride my wheel.  Traffic was not bad at all.  I was able to settle into a nice rhythm without taxing the legs early on.  Halfway through, Mary and I got separated as a couple Sport racers came upon us, and with their superior skilz, managed to pass Mary only to crash right in front of her.

She managed to catch back up with me on Old Copper Road.  I had an easier than normal gear on today, knowing that my legs would appreciate it on the climbs.  I was a little spinny and Mary was able to catch back up.  This was her first race on her single speed and she was doing very well, especially pushing a gear that would make most dudes cry for their Mama's.

I got a gap on her going up Bear Paw.  I soon caught up to a cluster of racers, going at Mach 0.005.  My legs were not happy with a cadence of 40 rpm, so when I got the chance, I was able to take an alternate, albeit, harder line, and get around them.  Back up to cruising speed, I made short work of the rest of this section, and soon passed Henry Trent and crew at the turn onto the Lower Chestnut.

Upon getting close to Thunder Rock, I came upon an old friend, Sam Curley.  He and Zeke were the ones, 9 years ago, that held me down, and injected me with the endurance bug's venom.  I still remember the day, when I did my first LONG ride (40 miles) and they kicked my arse!  But I was hooked.  Who knew that mountain biking was not just about going round and round on a groomed trail, but going on epic single loop adventures?

Sam has great descending abilities, and he had pre-ridden the course like a hundred times, so I followed his smooth lines down Thunder Rock.  Thanks, Sam!  At the bottom, I grabbed a new bottle and began the climb up FS45.  The legs barked a little, until the lactic acid was flushed out, and then I began passing back some of the Sport racers.  I guess they had burnt one too many matches in the first 20.

I was in my happy zone, feeling good about how my legs were doing despite the previous day's effort.  As I turned onto Quartz, I caught sight of Lisa just ahead.  That was another vote of confidence, and I was determined to slowly reel her in, and have her pace me through the remainder of the course.  I knew at some point I was going to hit a low, and it would be good to have her company.

I caught her on Bypass and together we rode.  We didn't say much, but then again, we did not have to.  Just our presence was enough of a motivator to continue to push on and not lolligag.  A couple Sport racers joined our pace.  I chatted a bit with them.  This conversation woke me up to the fact that not all Sport riders are inconsiderate bodies of raging testosterone.  He actually called me "Ma'am," a few times.  I will take that in a good way.

Halfway through Riverview, I felt that my rear wheel was not tracking well.  Uh oh, not again!  I managed to look down at it and noticed it was low.  I managed to keep any expletives under my breath, dismount, and triage the problem.  No hissing, no spewing of Stan's ... perhaps I had just burped it.  I added some air and did not hear any leaks..  Could I be lucky today?  This whole process took about two minutes.  Lisa now became my carrot.

After finishing up Riverview and with my tire still firm, I let it rip down Chestnut.  I flew by Henry who was now dressed in Hawaiin Luau attire.  He cracks me up ... always filled with happiness and cheer.  He is to the Cherokee National Forest as Shanna is to Pisgah, just a larger and hairier version.

Zeke was on the bridge, bottle in hand.  I pulled up and stopped.  His eyes got big!  "Don't stop, don't stop!"  he cried.  I wanted to check my tire ... still holding, good!  Grabbing the bottle, I made my way through the crowd cheering us on, and motored on up Old Copper Road.  It felt better this way, with a slight uphill.

Boyd Gap was a beast!  Even with an easier gear, I still had to get off and push a few times.  Even walking, I still managed to stay with a pack of guys on the climb.  Normally I could ride up, but the 70 miles of gravel grinding the day before had finally caught up to me.  I ... was ... blown!

Brush Creek seemed to go on forever!  I was ready to be done.  Then, with about 2 miles remaining, I caught sight of Lisa.  That was good enough to allow the two extra cylinders to kick in.  I dragged my way back up to Lisa.  Together we finished 1-2, both a first in our respective divisions.  Mary came in soon afterwards, 2nd SS.

The cold fruit and drinks at the finish was a nice touch.  Together I think Lisa and I devoured the equivalent of one watermelon.  The aid station volunteers had to kick us away like a pack of dogs surrounding an overturned garbage can.

My time was 3:27:15, about 10 minutes slower than last year.  I'll gladly take that time, as last year, I was well rested leading up to the race and also raced on gears.

That was a good finish to a spectacular weekend.  Confidence inspiring, to say the least.  As I have gotten older, I have definitely wondered just how much longer I can continue to keep getting better.  I know the plateau is not that far ahead, but until I hit it, I will keep striving to improve.

Posted by Carey Lowery at 9:14 AM
Email ThisBlogThis!Share to TwitterShare to FacebookShare to Pinterest
Labels: racing, single speed

Congrats on smashing 3 endurance races in 2 weekends!! What a rockstar you are.

What an inspiration you are! Thanks for the press!

As a long time reader of your blog and a long time road cyclist you inspired me to do BBR based on last years entry. I live in Northern Indiana, came down and had a great time. I DNF as one of the guys I was with crashed out and I helped him to the med tent. Had a great time, wish I could have met you. I will be back.