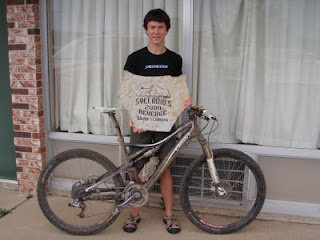 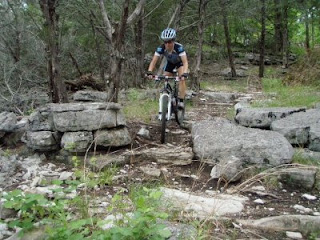 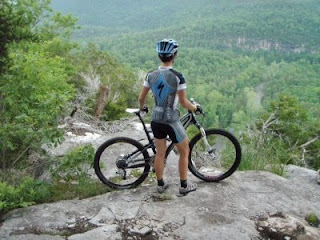 The day before Zeke and I pre-rode the first 10 miles of the course, then got off-course by mistake, and ended up riding an additional 2 hours and 20 miles trying to find our way back to the truck. There were so many ribbons of different colors up on the course we had no idea which ones to follow. I had a map I had printed off the web, but when the thunderstorms struck, it disentegrated. Oh, well, it could have been a lot worse as we were riding on a fireroad along a ridgeline when the worst of the storm struck ... talk about no time inbetween the lightning strikes and thunder!
Luckily, the storms that hit DSG the morning of their race came through Arkansas the night before my race. Race day saw perfect temps and beautiful skies. The start was fast and furious as everyone wanted the "hole shot." The singletrack was super-tight and made passing difficult. The first mile was a fireroad climb at 10% gradient. The rain made it soft and muddy in areas so it was important to fight for the line of least resistance. I followed Zeke as he weaved his way through riders (Zeke is awesome on the fireroads!) I managed to get in the first group to hit the singletrack.
From there it was a bit of a train over the next 8 miles. There were lots of short hike-a-bike sections as we had to maneuver around fallen trees and holes left by the root balls (some were big enough to swallow a small car. Towards the end of the yellow trail I began encountering lots of slippy wet and muddy rocks. These were flat slabs of limestone that were pretty sketchy to ride; you had to keep your rpm's up and have a smooth pedal cadence. At first it was difficult but soon enough I began to find the rhythm of riding these sections and that was where I made a lot of passes as other riders were bumbling around.
I stopped at the first aid station (mile 16)long enough to have my race number marked and then proceded onwards. The next section on the White River Bluff Loop and the Bald Scrappy Loop was even rockier and more technical. I managed to come upon a racer that obviously ridden this before as he was rockin' it. I was content to stay behind him and follow his lines as his were pretty sweet! I eventually went around him when he face-planted on a super-technical downhill that had several creek crossings. I did stop and made sure he was o.k.; he was, save for his ego.
By mile 25, I had settled in with a small group of riders. Our riding abilities seemed equal and we were all moving along very well together. After a rather long river crossing which felt oh so good on my feet, I rolled into the second aid station and refilled my Camelbak and gel flask.
From there began a long arduous switchback climb up Scrappy Mountain. It was here that I was able to pass a few racers with my superior hike-a-bike skills (thank you, Lisa, again). One poor singlespeeder opted to wear the Keen commuter sandals. What was he thinking? I rode what I could, but opted to run when I knew that was the faster method of negotiating the techy trail. I hiked up the "Stairway to Heaven" bouldery section thinking how fun it would be to ride down it!
Once on top, it became fast and flowy again with just a few short logging roads that connected the singletrack. By now, the course was beginning to take its toll on many riders. I still felt good at this point and was relishing getting to the red trail as I had heard that it was superfast and flowy with not much change in elevation.
I arrived at the final aid station, had my race plate marked, and rolled out onto the red trail. Only 14 more miles to go! Shortly though my happy face turned to one of concern as I saw the devastation that Mother Nature had done to this section of the course. It was like riding Brush Creek, but instead of the trailbed being smooth dirt it was a bed of sticks and branches and root ball holes. The trail was ready to eat your derailleur and devour your spokes! Definitely not a time to be racing with your Ipod; you wanted to listen intently to your tires and wheels in order to avoid disaster.
At this point I figured I had a pretty good lead and the race was mine to lose. So instead of rockin' and rollin' this final stretch, I went into conservation mode. I did a lot of soft-pedaling and coasting. I was also off the bike multiple times to pull sticks out of my derailleur and wheels. But I did manage to survive and popped out onto the fireroad descent back into the finish.
Whoo Hoo! What a fast and furious descent! I had my Powertap on for this race and at one point it clocked me at 127.81mph! I crossed the finish line in 5:48: good enough for the women's win and a 9th overall.
This was one of my favorite courses so far in my history or riding. Not many places you can race that has 99% singletrack in one big epic loop! And the rocky terrain makes for one hell of a ride; there are several spectacular views along the course.
Thanks to Saris for making a power meter that can handle the abuse I give it. Thanks to Specialized for one awesome ride. Indy ate this course up!
My trophy weighed in at 30 pounds ... a slab of Arkansas flat rock engraved with the race logo. Awesome!
Posted by Carey Lowery at 8:39 AM
Email ThisBlogThis!Share to TwitterShare to FacebookShare to Pinterest

Nice work Carey! Are you in the middle of a dream season or what??

I'd pay admission to see you race your coach :)

Dave--- Me too . We could prop our feet up and watch them go at it ! I'm thinking Dark Hollow or Thunder Mountain .--- Zeke

I caught up on your blog and see your season is going very well. That trophy is the best and race sounds like fun. I did get a Specialized and love the Sram shifting.

Great work! These picture are awesome.

I'm Hua, the director of Wellsphere's HealthBlogger Network, a network of over 2,000 of the best health writers on the web (including doctors, nurses, healthy living professionals, and expert patients). I think your blog would be a great addition to the Network, and I'd like to invite you to learn more about it and apply to join at http://www.wellsphere.com/health-blogger. Once approved by our Chief Medical Officer, your posts will be republished on Wellsphere where they will be available to over 5 million monthly visitors who come to the site looking for health information and support. There’s no cost and no extra work for you! The HealthBlogger page (http://www.wellsphere.com/health-blogger) provides details about participation, but if you have any questions please feel free to email me at hua@wellsphere.com.