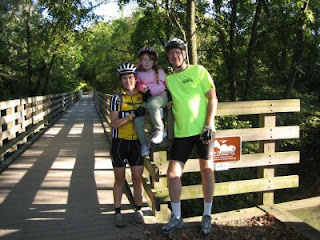 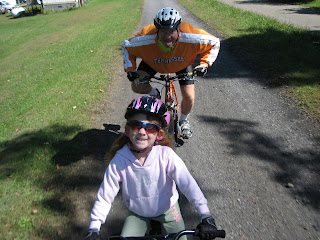 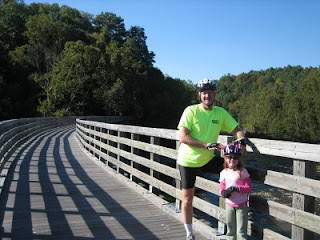 On Saturday, we did the family thing as I drug Carly and Charlie along the 34 mile rail-trail. Nah, it wasn't that bad. They both did very well, although they both developed a mild case of "raw crotch." Luckily it was almost all downhill and we stopped several times along the way.

The weather was perfect. Mid 50's to mid 70's and sunny. We stayed in Abingdon on Friday night. Carly, being excited about Saturday's adventure, got us both up before the sun came up, around 6 am. I had been looking forward to sleeping in.

We arrived at the Virgina Creeper Trail Bike Shop and loaded our bikes on the shuttle. After about an hour ride, we arrived at Whitetop Station, the beginning of the trail. There were about a hundred other people getting started, too. It would make for a treacherous start. Within the first 10 minutes of the ride, we witnessed two crashes. Other than some bruises and blood spillage, the people involved would live to crash again.

We happened upon Bruce, Pam, Will, and Morgan at one of the 47 trestles. We rode with them to Damascus, stopping to eat lunch at the Creeper Trail Cafe, home to the world famous chocolate cake. Although the cake was pretty darn good, it was no match for my sour cream chocolate cake.

The first half of the trail is all downhill, on a 2-4% grade. We travelled through some lush forest and beautiful farmlands. Much of the trail is on private property. From Damascus to Abingdon, the view opens up considerably as you pass through many farms, sharing the trail with cows. Along this section, there are several gates we passed through. The grade was level until the last 8 miles, then it began to slowly climb at 1-2%.

Pam, Bruce, and the kids stopped in Damascus. Their journey was done. At this point, I was a bit concerned about how my troops would do, but we continued on ... Abingdon or bust. Carly had lots of energy left as every time Charlie would try to pass us, she would start mashin' and propel our tandem forward.

With about 8 miles left, I could see that Charlie was struggling. The all to telltale signs: moving the butt around on the saddle, standing up and repositioning, and spending a bit more time coasting. I was a good girl, however, and Carly and I slowed and let him take the lead.

Poor guy! After 1 1/2 years of not riding, I take him on a 34 mile ride. Actually, he was the one who offered to come, after my girlfriends bailed. He managed to suffer through. I think the last 8 miles took us about 1:20 to finish. But finish we did.

Carly did amazingly well. She pedalled the whole way on her Trail-A-Bike. She never fussed a bit, except for the time she got debris flung up in her eye from my tire. After that incident, I let her wear my glasses for the duration.

I had to keep Carly in check for the first 10 miles as she was wanting to pass everyone in front of her ... at high speed! That's my girl! No fear she had. Me, I feared the "flying incompetents," so used the brakes quite a bit.

All in all, it was a good day. Rail Trails are enjoyed a heck of a lot better when not in the middle of a hundie!
Posted by Carey Lowery at 8:23 PM
Email ThisBlogThis!Share to TwitterShare to FacebookShare to Pinterest