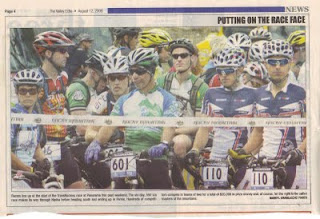 While staying in a cabin in Nipika during TransRockies, we met some TR3 racers from Tucson and Durango. They recently sent us the above photo of Day 1's start. Now this photo was taken while our morale was high, temps were warm, and skies blue. Little did we know that Zeke's expression would be a hint of what was to come. Not sure what Zeke was thinking when this photo was taken.

On a funny note, the team in red/white/blue next to us were from Portugal. While we were staying at the Nipika cabin for two nights, these guys were in tent city. However, they invited theirselves in to our cabin that we paid for and were sharing with about 6 other racers. Initially, we were o.k. with that, as they were just wanting to use our wi-fi.

But while Zeke and I were out racing the Nipika TT, our cabin-mates told us that they went from using the wi-fi to using our kitchen to prepare their food and drinks. The final straw was when one of them used our bathroom to unload a stink-bomb! After that, they were kicked out! Hence, their new team name became "El Dumpo."
Posted by Carey Lowery at 9:41 AM
Email ThisBlogThis!Share to TwitterShare to FacebookShare to Pinterest

Ha ! I was thinking" This is going to be a tough son of a gun " The Tr 3 guys were good guys . The El Dumpos were not .Being on the sports page in Durango is cool.But a paper that reports on Mountain Bike races is most cool !!