Four years ago, I thought I would never be able to run again.  I had developed a foot neuropathy in 2011. Too many 24 hour solo events and an attempt at TNGA, where I had to pull out at Hogpen after excruciating foot pain, had caused a multitude of foot problems (Morton's neuromas, dropped arches, and metatarsal fat pad atrophy). Even after a foot surgery in 2012 and wearing custom orthotic inserts, for 3 years, I still could not walk barefoot for any length of time without being in pain. And I had to severely limit my long distance bike events. But time heals all wounds and just this year, I began running a little.  Baby steps turned into 1 mile, then 2 miles, and finally I could run 3 miles without any significant discomfort. 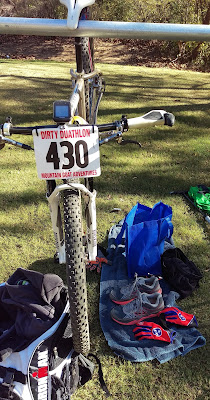 So it was only logical (in my mind) that after a few 5K lunch break runs that I make an attempt at racing one.  But since running is not fun, seriously, how many runners do you see that are smiling?, I sammiched the run between two mountain bike legs.  Hence, Mountain Goat Adventures' Dirty Duathlon.

I decided on the SS, since Mary had signed up in my class.  Well, the little stinker decided to race gears, as she thought the start would involve the 1/2 mile of greenway.  Oh well, the course is well suited to one gear.  Just not sure I was, having raced 5 Points 50 the previous weekend.  Recovery is not as simple as it used to be.

The first bike leg was the Mill section.  Five miles of fast and flowy, where momentum could be easily carried through the turns.  The race started out XC fast, something I had not done in awhile. All I can say is "Dayem ... that hurt!"  With Mary on my wheel, I went hard on the gas. I don't think I sat much at all on that leg.  I was hammering on the ups and the downs were just bumpy enough that I needed my legs for suspension.

Mary and I entered the transition together.  This is where I became all thumbs!  The cold brisk air had chilled my fingers to the point where tying my running shoes became an event in of itself. I began the run with all my bike crap in my pockets, so made a quick U-turn, dumped out my contents, and then began my run, again. Breathing the cold air during the bike had irritated my throat and for the first 10 minutes or so, I coughed and hacked like a smoker.  The run was on the Explorer Trail which had its ups and downs, but nothing too steep.  There was definitely a good flow.  I would not call myself a runner, but a fast plodder.  I passed only one person while getting swept into the wakes of at least 10 runners.  The only thing that hurt during this effort were my lungs.  Well, until I tripped over a stob and "Superman'd" into the dirt.  Next time, if there is one, I will keep my cycling gloves on.  I popped up and looked around to make sure there were no witnesses.  Crashing during the run ... only I could pull that off!

As I came back to the transition area, Lisa told me that I was 2 minutes behind Mary.  I wouldn't call that getting "smoked," but it came pretty close!  This transition went a little quicker as it is easier to put bike shoes back on.  I took a few swigs of fluid, put my bike crap back into my pockets and hopped on the bike.

The legs were NOT happy.  I had to HAB up the first few yards of the Avalanche Trail.  The trail finally leveled out somewhat where I could hop on and pedal with a cadence of 40.  That initial climb about did me in!  And I realized I had forgotten to put my glasses back on.  So for the remainder of the race, I had images of a stick being rammed into my eyeball.  Call me paranoid, but after seeing many dogs and cats with severe eye injuries, I ALWAYS wear glasses.

This bike leg was more at a ride pace than race pace.  My legs were hurtin' buckaroos.  I guess the transition from bike to run is something that one just has to work on to get the body used to it.  I was wishing for one easier gear, as it was difficult to turn the pedals over on the steeper climbs.  I didn't turn myself inside out on this legs as I couldn't, so just tried to enjoy it as much as possible.  This trail was not flowy like the first one and had more climbing.  The corners were sketchier, too.

1 hour 30 minutes later, I rolled across the finish line.  I suffered in a whole new way today.  I enjoyed the challenge, but not sure if I will do it again.  I will still run as it compliments my cycling and the bones do need a good pounding every now and then.