Earlier in the month I was a bit torn between this race and the Payne's Creek 6 Hour.  Both are super fun in their own unique ways.  Did I want chunk and gnar on full squish or fast and flow on my SS? 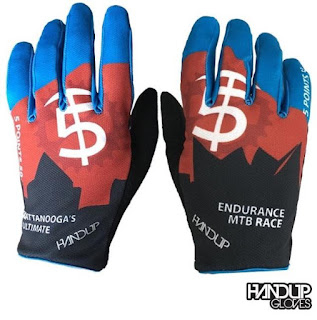 HandUp Gloves made my decision easier.  A pair to each registrant ... SOLD!  I was also loving my Niner RKT, especially after putting a Fox StepCast 32 on her.  We had bonded pretty tightly at the Marji Gesick and I just could not let her sit at home this weekend. 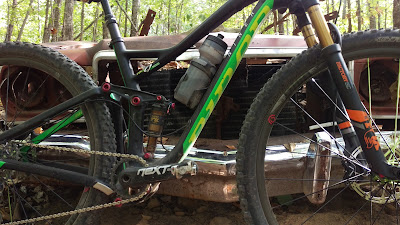 After last year's mudfest, conditions this year were on the other end of the spectrum.  Dry, dusty, and fast!  Justin and Amy Mace of Roost Racing had taken the race over and with the addition of a 25 mile course, had nearly doubled the registrations.  Thumbs up to the 9 am start!  1 hour later made it a bit easier to negotiate the off-camber venue and allow for a little more sleepage.

I managed to park beside the Quadinator, Mr. Scott Harper himself. Although we had been FB friends since last year, I finally got a chance to chat with him about SS, CrossFit, and stomping him at Iron Mountain (he brought that subject up).

As I dug in my cooler for my flask of Gu Roctane, I realized I had left it at home.  Panicking, I reached into my gear bag and pulled out 2 gels, a Honey Stinger waffle, and a Larabar.  I don't do well with protein and fat during a high intensity race, so I would save the Larabar for the end, where I would expect my heart rate to drop and so could better tolerate this type of fuel.  Mark was also kind enough to give me some Cliff Shot Blocks.

The start was a neutral roll out on pavement for 5 miles.  The first couple miles were at a great pace for me to warm up.  The big engines up front put the hammer down around mile 3 and I quickly settled into the second group, heart rate in the red zone and the legs burning going up the climbs.

The legs were happy to hit the single track.  I was sandwiched in between two single speeders.  Rich was in front, showing me which lines NOT to take, and the SS behind me (sorry, didn't get your name) was heckling Rich on his lack of skill.

They eventually got away from me, as the trail pitched upwards and Rich found his groove.  The first 8 miles of the 5 Points system was a blur. The flow was on!  Some loose over hardpack, but nothing too sketchy.  I had Scott on my tail through most of this.  I just knew he was itching to get by, but when asked, he was content to ride my coat tails.  Finally, as we approached the last half of Kettle Bottom Trail, he slid on by and slowly pulled away.  Pretty sure he was thinking "unfinished business."

The legs started getting a bit heavy grinding up Cross Cut and I had to back off less I take the chance of blowing up.  And I knew, from having done this race twice before, I had to save some for the last 12 miles.  I caught Mary out of the corner of my eye as I was switchbacking up the trail.  There went any hopes of a rest.  Trish was also back there. If I could just stay ahead on these nontechnical bits, I could possibly gain some time through the rock gardens.  I decided to use a couple matches.

Coming into the rock garden on Cap Rock, I knew the line that would see me through cleanly.  A heckler was there and "poo-poo'd" me when I took a left after I made it over the first couple boulders on the climb up.  Calling me out for taking the easier line, I could care less cuz' I cleaned it!  Then he started on the guys behind me as they followed. That gave me quite the chuckle.

Rolling through Aid 1, I saw Jen seated next to her vehicle, covered in a blanket, and giving  moral support as I blew by.  I was disappointed for both her and myself that she was nursing a knee injury and could not race.  She would have absolutely ate this course up, not to mention pushing me into the pain cave with her fitness and skills.

The trails on the other side of Ascalon parking lot are some of my favorite of this course.  Barkeater and Kindergarden are full of rock gardens and will have you doing all kinds of dances on your bike to keep upright and make it through unscathed.  I was digging my I-9's through this as I had to back pedal quite a bit to avoid pedal strikes.  A spectator at one of the toughest parts told me I rode it as well as any of the guys.  Thank you, Mr. Boost of Self Confidence!

Finishing up this section, I was happy to see my BRF Zeke Lilly out there.  He heckled a few guys as I was dragging them up a hill.  Little did he know that they were just being polite and waiting for room to pass.

Not needing anything, I blew by Aid 2 and headed out to finish the remaining miles of 5 Points.  22+ miles in and my lower back was killing me!  I needed to stand up and stretch it out, but the ups/downs/lefts/rights of Hogsback and Bankhead kept me from doing so.  The pain worsened!  Time to embrace the pain cave!  I kept telling myself that this is only temporary; it helped mentally, but physically I was having a difficult time pushing the power.  Finally I hit the connector and was able to stand and stretch, which brought some much needed relief.

With a brief respite from the achy back, I made short work of Peace Can and Tailings.  So stinkin' fast, I was loving every minute of it. Then onto the LongBranch connector ... not so much fun. Chewed up, horsed up, ATV'ish double track littered with baby heads.  The back pain set in once again so I would stand up and stretch whenever I could.  A lot of the corners had deep sand and my front wheel washed out more than once.  How I did not end up on the ground I do not know!

Entering the LongBranch Community's private trails, I gulped my last bit of hydration from my CamelBak.  The 3 creek crossings were totally dry ... and rideable.  The climb up Theo's Trail was hell, as it set my back off once again.  I finally figured out that if I just stood and rode my bike like a single speed, my back stopped barking.

I stopped at aid 3, chugged a Red Bull, dropped my CamelBak, and grabbed a bottle for the final push.  Down the pavement, right onto a highway, climb for 3/4 mile, left onto private property, down a loose and deep gravel road, and then UP just one of many steep double track climbs.  I can see where this last 10 miles can be so demoralizing for some.  But I had saved enough for this stretch and, aside from my back, I was in my happy place.  Thankful that my "scavenged up" nutrition was working, I motored on, knowing that soon the scent of the barn would be near, giving me that extra bit horsepower to finish strong.

So up the horrendous climb to Jedi, a shred fest of flow!  Then up another climb to enjoy the slightly technical and off camber Homestead Trail.  Then bomb down gravel, surf the corners, and hit the South Creek Trail.  As I negotiated its tight and twisty turns, I got to smell the food and listen to the music as it took me right by, but across the creek from party central! Soon I came to the creek crossing, which was not much more than a trickle.  Last year it was up to my heart rate strap and I had to hold onto a rope with one hand and shoulder my bike in the other!  Once again I passed by the finish as I climbed my way out of the Trust's lands to begin the final section of private trail.  But first, a two mile rolling section of pavement.  Thank you Jesus for the trailwind!

These last few miles really test your mettle.  By now, my legs were trying to die, my back was on fire, and my stomach was growling for real food. Any normal person would ask, "Why?"  To which I would respond, "because this is what makes me feel ALIVE!"  So I enjoyed the powerline climb, the loose and ledgy descents, followed by more powerline.  Because I knew that on the other side was some sweet bits of final single track.  On the edge of losing it in the corners to mustering up enough torque to grind out the final climb, I relished being able to feel my heart beat and hear the ragged breathing, signaling that I was living on the edge.  Hitting that final crest, I let up and let gravity do its thing, sending me over those last rocky drops and feeling my bike use up every bit of suspension, as I found the ground again.

Trying to time trial it to the finish, the final mile was the hardest. Slightly downhill, but I was having a hard time pushing over the pedals, the legs filling with lactic.  Seeing the finish line, all smiles, and happy to be the first woman across.  4:41, almost 40 minutes faster than last year!  That tells you just how great the conditions were, as I feel that my fitness is about the same.  Little did I know that only Trish's ghost had been chasing me down; she had taken ill and without much sleep the night before (seems they were the only ones in the hotel that did not have bloodhounds as there was a dog show in town), decided not to race.  I was glad I did not know, as her ghost kept me pushing to hit that red zone all day.


I want to thank Justin and Amy for putting on a great race with great schwag, prizing, food, and beer (so I heard).  The volunteers were awesome and much appreciated.  I chose the right race this weekend!