Leading up to the Marji Gesick 100 in September, I decided to do the Night Train 6 Hour race at Fontana Village this past weekend.  With afternoon weather conditions potentially calling for severe storms, I didn't want to travel all that way and the race to be called.  So, I signed up for the 12 hour, which started at 10am, and planned to race for 6 hours (The 6 hour event started at 4pm)

I've raced SERC races on this course and knew it would have some challenging techy bits that would be similar to what is coming up at the MG100.  I was also trying out some new nutrition:  peanut butter filled dates.  I am normally a Skratch and gel girl, but wanting to see how a bit of protein and fat would fuel the engine.  And I had just had my new dropper post installed on the RKT, so I was eager to see how that would be to my advantage on the descents.

True to Pisgah Productions starts, it was raining.  Not enough for me to don my characteristic shower cap, but enough that I decided to carry it with me, if things got worse.  Unfortunately the turn out was low for the 12 hour:  2 four man teams, 1 two man team, 1 solo male, Mike Pierce, and I.

Immediately out of the gate was a steep grunty climb.  Having not pre ridden, I was totally in the wrong gear!  Shifting up about 20 times, I got into granny and made it to the top.  Then through some grassy, energy sapping fields, up another couple grunty double track climbs, and finally onto the Llewellyn Cove Trail, where I could shake the lactic out.

It was raining just enough to make the rocks and roots slicker n snot, but surprisingly the dirt portions of the course were hero dirt.  I was super happy about lowering my seat on the fast, tricky descent. Climbing back out was a series of short, steep ups.  I could clean them all save for the very last half of the last one.  Just enough roots to cause me to spin the rear wheel out and not having the power in the legs to recover from those 1/4 turn pedal turns.

The course was a figure 8, each lap 7 miles with 1100 feet gain.  The second half of the course was on the resort property and was run CW on the Whiting Trail, some double track rocky climbs, and the Piney Ridge, and Turkey Shoot Trails.  This portion was much harder than the first half.

Those double track rocky climbs were like climbing up 10-20% grades on baseball size marbles. Needless to say, I was off the bike in a few spots.  Once again, just not enough power and could not keep a smooth torque.  It might have had something to do with the week of training leading up to the race:  3 gym sessions and 2 interval sessions.

The upper half of the Whiting Trail was littered with roots.  Holy cow, I was all over the place!  By the time I had the lines figured out in the latter half of the race, fatigue was lending a hand in the difficulty of progressing through the trail cleanly.

A short bit of pavement led to the Piney Grove Trail.  And a nice hike a bike up to the top.  Curses you, Eric.  But, of course, it just would not be a Pisgah Productions event, without a bit of pushing. There was a reward at the top: a 1 mile 500 foot descent.  Kinda tricky, with off camber turns on pine straw, sharp switchbacks, and rutted out gully washer sections.

I was able to get in 6 laps.  The first was 52 minutes and the remaining five hovered around 57 minutes.  The thunderstorms never came.  The light rain on laps 1, 3, and 4 allowed for practice in slick conditions (a first this season).  Aside from a yellow jacket sting on the second lap and the usual Pisgah Productions level of suffering, the bike and I came away unscathed.


I am truly enjoying the Niner RKT.  At first I was a little concerned with the 10mm less rear travel, but I really don't notice the difference.  I figured out the finicky rear lockout switch and use it alot. Although the dropper post added a bit of weight, the advantage of being able to get the seat out of the way on sketchy descents makes it worthwhile.  The short chainstays make for easier maneuvering around switchbacks and better traction on uphill out of the saddle hammering.  The only issue I am having is a SID RCT3 fork that just doesn't feel right and won't lock out.  I hope to have this issue remedied in the next few weeks. 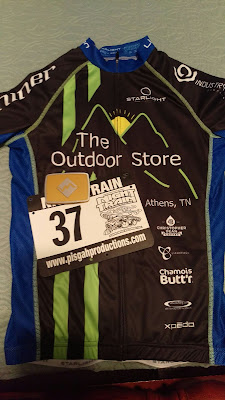