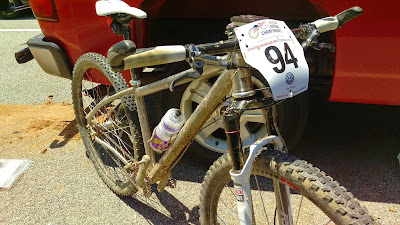 As I choked down my pre race breakfast, the butterflies were swirling heavy.  I cannot remember the last time I was this nervous.  Warming up prior to the start, my stomach was sour and that NEVER happens.  I calmed myself by finding a secluded area to warm up the engine.  I was more worried about myself than my competition.  With only 1 race, 6WC, under my belt and 4 weeks of semi-structured training, I was not sure how my body would respond.  I still had a lot of self-doubt running through me.  Was 6 weeks off the bike enough to reset my system?  How much top end fitness did I lose?  Did I choose the right gear and could I stay on top of it for 60+ miles?

Lining up with four other strong women, the butterflies settled and I was determined to leave it all out on the trail.  We were going off with the 35+ wave which included my team mate Lisa.  The whistle blew and with one pedal stroke I was clipped in and hammering up the gravel road.  Amber and Stefanie pulled ahead and I could see they were pushing a harder gear.  I was determined to stay with them and my legs were ready to pedal a RPM of 130.

Upon hitting the Bartram Trail, I latched on to a group of 8.  Although the pace was XC fast, my legs surprisingly felt good so early in the race.  Slowly throughout the first 15 miles, the group thinned as either a racer would bumble through a ditch crossing or was unable to keep up the pace.  Hitting the double track section where there were several log crossings, I played it safe and ran them.  Stefanie was having issues with these features, casing one, and then almost falling trying to run them.  I knew right then that I would probably have an advantage over her in the upcoming technical sections of Keg and Mistletoe.

Amber, on the other hand, was steady and smooth.  She definitely had an engine ... and pistons that seemed to be twice as long as mine.  I would have to bide my time and wait for an opportunity.  As we crossed the highway and began the 3 mile rake n ride section through pastures, woods, and powelines, the geared ladies and Amber were able to pull away from me, but I never lost sight of them.  I, as well, was able to pull away from Stefanie.


Coming into feed zone 1 at mile 15, I was glad I chose the CamelBak for the first half of the race.  The pace was so fast and intense, I would not have had a chance to let up and drink from a bottle.  Upon entering the 15 mile section of Bartram back to the start/finish, I was able to reel in a group of 3 ladies:  Lisa was leading, followed by Amber, and a 30+ woman.  I was content to sit on the back while Lisa set a blistering but sustainable pace.  Our group slowly devoured male racers as we rolled along the flowy trail.  All the men were very polite and moved off the trail as our little train rolled through.

Approaching the Start/Finish, I began to undo my CamelBak.  I knew that Amber probably would not stop and I needed each and every second.  I threw off my CamelBak, grabbed a bottle from Doug, and headed out for the second half.  Climbing up the gravel road just out of the Start/Finish, I had the first inkling of fatigue.  The first half I had completed in 2:14.  Could I keep up this pace for another 2+ hours?  Probably not.  I was just hoping that Amber was having those very same thoughts.

Amber was able to put a 5 second gap on me on the double track, but I was able to close that down on the section of Bartram that lead to the highway crossing.  After the crossing Amber was once again able to get a gap on me on the 2 mile gravel road leading to the Keg Creek Trail.  Her gear was beginning to annoy me ... or  it mighta been my one easier gear was frustrating me on the flat road sections.

As I approached the sharp right hand turn onto the Keg Trail, I saw Amber had overshot and was coming back up the hill.  (It was this unmanned turn that put many a racer out of contention.  Some figured it out soon enough but others ended up riding the last half of Keg backwards). I saw an opportunity and attempted to open a gap on her.  The effort was painful and short lived as she reeled me back in on the highway bridge crossing.  Together we rode the 3.5 miles of Keg before popping out into the neigborhood.  On the double track climb up to the pavement, I knew I was going to be in trouble as my legs began to bark.  Fortunately I was able to close in on a couple men and ride their wheel all the way to Mistletoe.  This woud give me some much needed rest, but it also gave Amber an opportunity to recover as well.

Riding through a field for about 1/2 mile, my teeth rattled in my head.  Looking to my right, I saw a perfectly good SMOOTH PAVED road.  That was torture!  And, I would have to ride this again on my return to Keg.  On the out/back single track to the Rock Dam Trail, I was able to ride the flat rock creek crossing.  The water had receded and there was only one patch of slick algae that I was able to lift my front wheel over.  Melissa was stuck to my rear wheel like a tick on a dog.  On a couple occasions I asked if she wanted around, but she said she was content.  Like a cat "toying" with a mouse before the death strike, I envisioned.  But as long as she was behind me, I had a chance.

As I approached the deep creek crossing, I came upon a male racer, who seemed somewhat dumbfounded as how to approach this steep 10 foot drop down to a 20 foot water crossing in which there appeared to be no bottom.  He asked if I was going to ride it.  "No," I told him, "but I will show you how to get across it quickly."  I slid down the slope, plopped into the water which came up to my waist, held my bike over my head, waded across, and then ran the 40 yards up a 12% grade and quickly hopped back on the bike.

The next couple miles were fairly technical with a ditch crossing followed by a steep up and then eventually hitting the off camber rock garden that was about 40 yards long.  Surprisingly I was able to stay on top of my gear and clean it.  I heard Amber stumble behind me and once again tried to surge ahead.  I made it all the way to the water bar run up before she once again latched onto me.  Together we made quick work of the Cliatt Trail, passing several more men.  We were now on the tail end of the 40+ men.  That was a confidence boost for me, as our group had started 10 minutes behind them.

Once back on the second half of the Rock Dam Trail, I tried to tap into my reserves.  I knew Amber was strong and had the bigger engine.  If I could just stay with her until we hit the second half of the Keg Trail ...   Along a flat section, Amber said she would pull us up to a small group of men about 30 yards ahead.  She passed me and I hung precariously on her wheel.  She then asked how far we had gone.  I said 45 miles.  Done "toying with the mouse," she went in for the kill.  She powered up, got a gap, to which I could not respond, and was gone.

I had about a 30 second pity party, but then endeavored to persevere.  There were still 15 miles left and lots could happen.  By the time I hit the third and final feed zone, Doug said she had about a minute on me.  I swapped bottles and, on the fly, chugged down a Red Bull.  If I ever needed "wings," I needed them now.

The 4 mile flat section back to Keg was miserable.  Spin, spin, spin, coast, coast, coast, spin, spin, spin, coast, coast, coast, etc.  At one point my legs were going so fast, I thought they might shear off at the hip joint.  Once back onto Keg, I was in my element.  Summoning what strength I had left, I dug deep and fought for every inch of that trail.  Around every corner, I looked for Amber.  As the miles slowly ticked away, I then began looking for the gravel road.  That last 5 miles on Keg was a beast.  The roots had grown bigger and more numerous.  And the log crossings!  I swear I heard them heckling me.  I hopped a few, bounced off a few, ran a few, and crawled over a few.

Finally on the gravel, I thought I could smell the barn.  This 2 mile section seemed to go on forever! I was running on empty and I was veering left and right to find every drop of fuel left in the tank.  Crossing the highway for the final time, I pretty much concluded that I was now racing for second.  So then I began looking over my shoulder for third.  Almost home, I was racing around a corner, when I had to slam on the brakes as there were about 20 racers stopped in the middle of the trail.  Just what I DID NOT want to happen.  The pros had started and to allow then the full lane of double track up to the Bartram Trail, they stopped our progress down the double track to the finish.  I saw Amber about 5 racers ahead of me.  (She later told me that I was about 2 minutes behind her, up until this point.)

One lonely USAC official was there trying to take down our stopping time, but that was futile as there were more racers there than she could handle.  There was NO WAY that this would be a fair finish.  After I was stopped for about 4 minutes, she started to let racers go in 30 second increments.  In another 2 minutes I was off for the final kilometer.  At least in this 6 minute of limbo no other ladies had shown up.  My legs let me know immediately they were not happy.  The lactic acid was almost unbearable, but the pain was almost over.

Cruising down through the finish with a silver medal was not how I wanted this race to end.  However, I had no "hindsight" moments.  I had a perfect race, laid it all out on the trail, but just could not match Amber's engine.  I was very pleased with my performance; my legs had some spark and my heart was strong.  And I had the second fastest overall time. This race has given me a big boost of confidence going into the second half of the season. 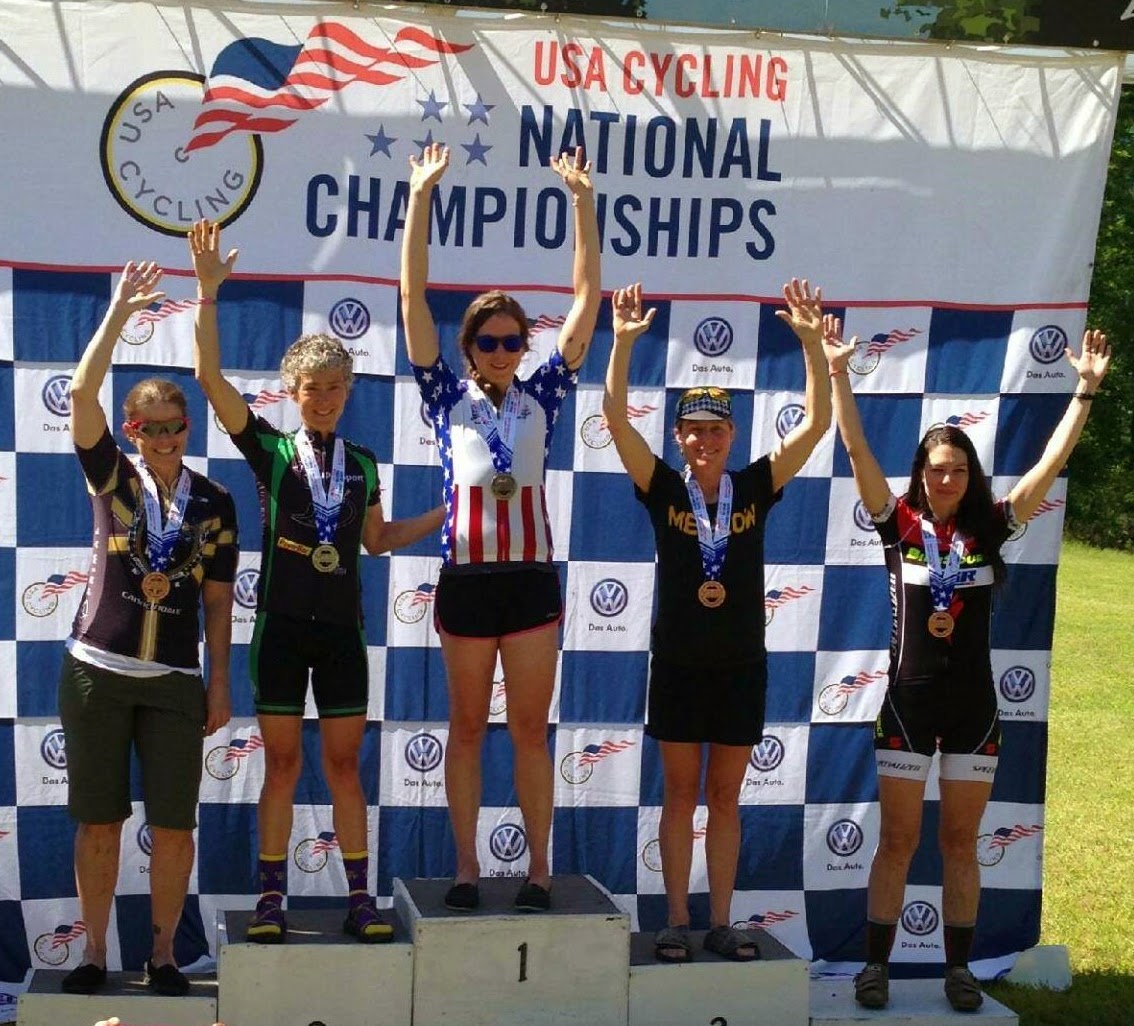