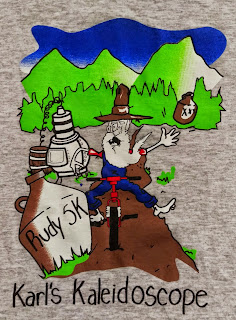 After a two year hiatus, I returned for the 4th edition of this super-cool grassroots race.  In remembrance of Karl Kalber, founder/promoter/best friend Mark Prater created this epic course through the countryside and mountains surrounding Marion, Virginia.  Cory told me that the course was different than the inaugural course:  more single track, less road.

I awakened on race day to clear skies and perfect temps (60-70 degrees).  Although the pre ride the day before was less than stellar, leg-wise, I was determined to have a fun romp through the woods.  During the pre race meeting, Mark gave us a nice breakdown on the course, going over it turn by turn.  I stored as much info into my memory banks as possible.  I was surprised to see such a small group of us, what with a HUGE and EQUAL payout ($800, $300, $200, $100, $100).  There was still plenty of good competition to be had.

Zeke said a prayer, Karl's son shot his pistol, and we were OFF!  The start was ridiculously fast, or perhaps it was just that I was trying to stay with the lead group of men.  After a short stint on pavement, we hit the flat Lake Trail.  I went into the single track in 6th, but soon was passed by an onslaught of racers, including Laura Hamm.  My legs were already barking so I knew better than to try to hold this pace.  It was hard to do, but I let Laura go, hoping that over the course, my legs would open up, and I could scratch, dig, and claw my way back up to her.

After going down around the spillway, up the backside of the Lake Loop, I found my happy pace going up CCC Camp Trail.  These trails in Hungry Mother State Park are beautiful and well-maintained.


I found myself with a couple other guys who had a nice pace.  Going around a couple switchbacks, I could see that Misty was only seconds behind me.  And then the trail turned up ... steeply.  I went from my happy pace to a slow grind up the 15-18% pitches.  One mile later I was headed onto Molly's Knob, which was equally steep. 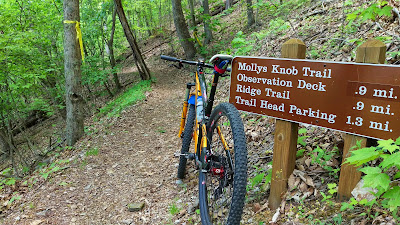 Having ridden this the day before, at least I knew that this painful grind would end with a sweet, exhilarating 2 mile descent.  Even though the trail was wide and smooth, it had alot of loose shale that made the off camber turns quite interesting.  I was following Shane down this descent when he took a right onto the pavement.  There was a fence at the bottom of the descent.  We were so focused on not hitting it and did not see the sign for the left hand turn.  After I rode for a short distance, my brain turned back on, and I realized that we should have taken a left.  I yelled to Shane and turned around.  Fortunately I did not lose much time.


After a brief pedal on the park roads I then hit Raider's Run and Old Shawnee Trails.  These were equally fun but not as painfully steep.  Soon enough, I was back out onto some gravel double track, heading towards the last trails in the park.  But first I had to pass by the two aggressive beagles.  At least they were penned up.  They got so tore up by the racers passing by that they would take out their aggressions on each other.  After I passed them, I could gauge the other racers behind me by the sounds of their skirmishes.

Before I hit the Clyburn Hollow Trail, the course took us through the back of a sawmill/machine shop where I got to test out by tubeless set up, running over various pieces of wood and metal.  Having passed the test, whew!,  I hit up the last bit of single track in the park.  This section was once again fun and fast with plenty of climbing.

After a short repeat on the Lake Trail, I was motoring on the pavement section through Mitchell Valley.  The course turned onto a cattle farm where workers were busy setting new fence.  After plowing through a deep puddle of mud and probably some manure, I then got to enjoy a bulldozer chewed up section where the fence was being rebuilt.  It would have been much smoother had I remembered to unlock my fork from when I had locked it back on the Mitchell Valley Road.

Crossing the farm led me to Bear Creek Road, where I was promptly greeted by a flagman with a big STOP sign.  After waiting 40 seconds (long enough for my legs to seize up), I was allowed to go.  The reason for the stop was that a group of men were trimming trees off of powerlines.  Motoring on, I soon caught up to a single speeder, who told me that he had been riding with a group that included Laura.  He thought that she was just a couple minutes ahead.  So close, I could smell her, but the legs were content to  rest a bit behind the SS'rs wheel.  Making short work of Crawfish Road, we hit the Crawfish Trail together.  Wow!  Just wow!  This was a beautiful and relatively flat stretch of old school trail with a dozen or so creek crossings.  All of the crossings were shallow, save for one which went well over my bottom bracket.  Several of the crossings were technical as they were rocky and muddy.  But so much better than when I raced it in 2012; the whole trail was a slimy mess.

Soon Mr. Singlespeed pulled away from me and once again I was on my own.  Pretty much the entire race I had my own bubble.  At an intersection two course marshals were each sitting on a log.  Between them was a log "table" complete with table cloth (paper towels).  They were partaking of wine, cheese, and salami.  How I was able to see all of this in a span of 3 seconds, I do not know.  But it was absolutely hilarious!

After about 5 miles of Crawfish bliss, I was on the never ending gravel road.  At least it was flat.  As I had plenty of time to think on this section, I found it peculiar that my strength today seemed to be on the flats.  All those steep ups back at Hungry Mother had really put a hurtin' on my legs.  But on the flat sections, I could bury my head and keep a good tempo.  Rolling into the second aid station, my CamelBak was on "E" so I filled my bottle and grabbed a gel.

Then began the Walker Mountain climb of death.  4 miles long and 32 miles into the course, this was a beast!  My legs would have none of it; at one point I thought they were going to have a mutiny.  The farther I climbed, the harder the trail got.  It started out as a gravel road for a short ways and then became an unmaintained gravel double track with several areas that were rocky and washed out.

I kept looking over my shoulder, expecting to have racers upon me at any moment.  That "looking over the shoulder" thingy I hate to do as it is a sign of weakness.  I felt like a struggling fish in a deep blue ocean just waiting for the sharks to come finish me off.  But none came.  I finally topped out onto some weedy ATV trail that led to the Pisgah-'ish 2.5 mile descent.  I was so looking forward to brapping down some fun trail.

Seeing the many yellow strands of  "police line do not cross" tap tied onto trees, I knew the fun had arrived.  This trail, if you can call it that, called for total focus.  With hardly any foot print and with one continual rock garden, your eyes were constantly flickering up to see the tape to know where to go and then down to negotiate through rocks.  A couple times I made "new" trail as I got off track.

After a short hike a bike, where the trail was hugging the steep mountainside, I found myself on the section I call "Mini Heartbreak Ridge."  2 miles of descending through a washed out fall line and I came upon the moto duo who were still enjoying their deep woods formal dining experience.  Turning right, I made short work of a portion of Crawfish, in the opposite direction, before hanging right onto several miles of rolling doubletrack.  Riding Crawfish this way was funner as it was slightly downhill.

Coming back into Aid Station 1/3, I stopped to refill my bottle and grab another gel.  Riding back on Crawfish Road, I was greeted by a nice headwind; at least the breeze was cool.  After about 1/4 mile on Bear Creek, I was directed by a family of course marshalls onto another grassy double track.  This was also part of the Crawfish Trail system and had a mix of doubletrack and trail.  I knew that the finish was soon so I tried to up my effort.  The legs were back talking, but I was having none of it and forced them to pedal until I reached a certain HR.  Kind of a game I play when I am physically "whooped."  Today it was working and I was able to eek out a little more power, or at least that was what I perceived.

Coming onto the Kalber's homestead, I was greeted by Karl Jr.  He was  a hoopin' and a hollerin.'  Glad to have that mental push to keep the legs turning the pedals over.  Passing through the roads of the state park, I knew I had second.  Can't say I wasn't disappointed to not get first, but that's racing.  I did achieve my #1 goal which was to have fun.  Painful at times, but the kind of suffery fun all of us endurance nuts feed upon.


I can't say enough great things about this race.  Plenty of pre race schwag, post race pizza and beer, excellent aid stations, great course, down to earth promoter who worked his a$$ off to prepare the course, and seemingly endless prizing.

Posted by Carey Lowery at 9:16 AM
Email ThisBlogThis!Share to TwitterShare to FacebookShare to Pinterest
Labels: racing