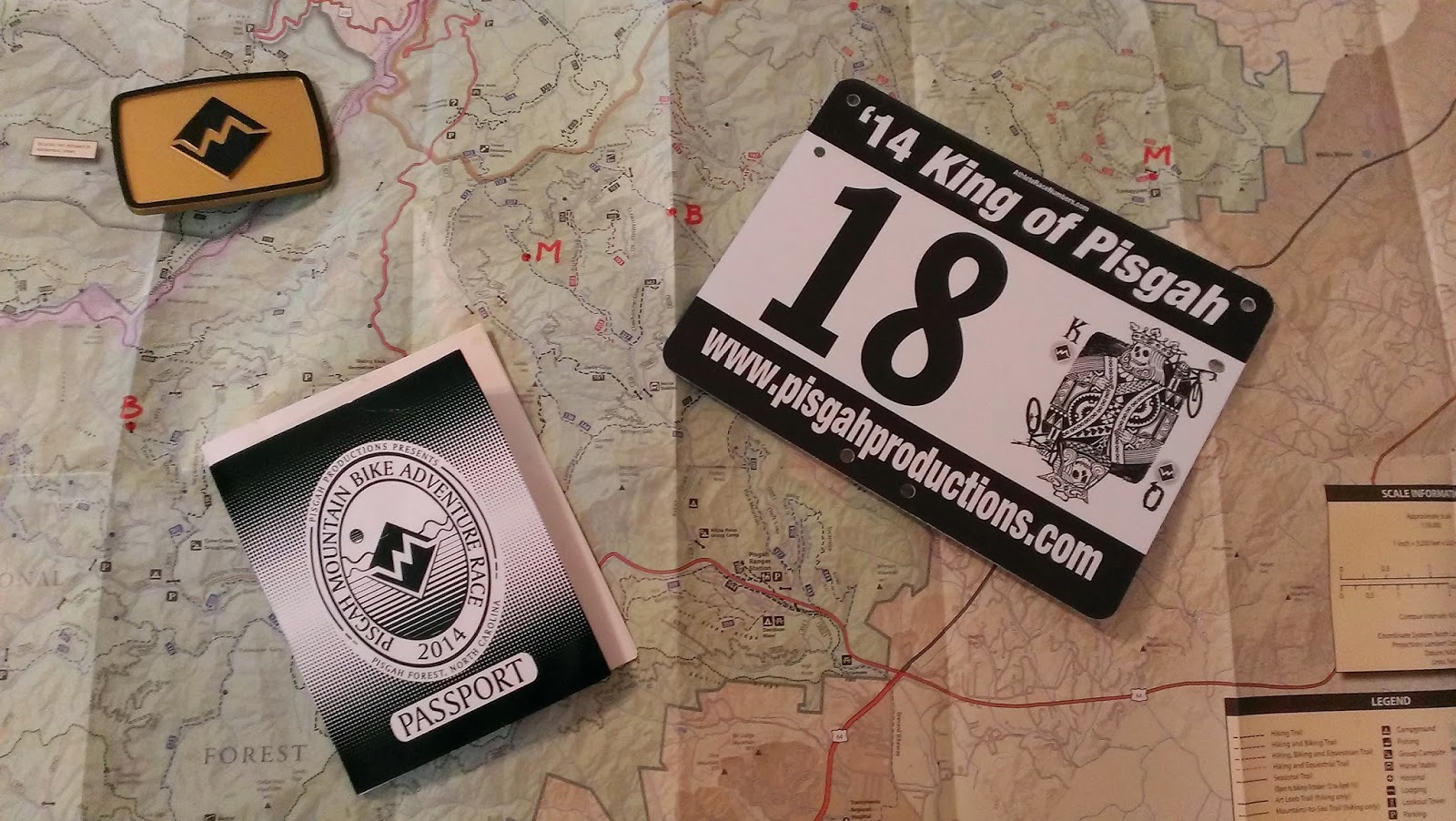 The weeks leading up to this race are almost as fun as the race itself.  Laying out all the gear I think I will need, deciding how I can downsize, and then where to put it all.  Pouring over the map looking at potential routes.  Eating clean, sleeping well, training right.  Checking out every little component of my bike.  Should I slap on some new tires?  Is the chain o.k.?  Is that creak I hear just an annoyance or something about ready to explode?  Watching the weather.

I look forward to this race more than any other.  With no set route and not knowing the checkpoints until the race start, this race is as much about strategy as well as fitness and skill.  I was ready and after Lisa destroyed the Big Frog field the week before, I was hoping she would stll have that spark in her legs.

Mother Nature could not have handed us a better day.  Dry and warm ... a first in Pisgah!  At 8:15am, Eric said, "Go!"  We opened our passport, skimmed quickly to make sure there were no stupid pet tricks (there weren't), closed passport, and began the climb up Black Mountain.  We fared a little better this year as traffic was light.  Once at the crossroads of Black and Maxwell, we stopped and began to plot our course.


After about 5 minutes, we were off to get the CP on Black.  Push, push, push, pedal, pedal, push, push, stop and make sure bloodied-nose dude is o.k., pedal some more, and we reach at the CP. After we got scanned and stamped, we continued on Black to the next CP on Squirrel.  By this time, my legs and engine were warmed up, and I was beginning to sparkle!  How I love that feeling when all systems are running smoothly.  Finding the flow of Buckhorn, South Mills, and Squirrel, we made quick work and were soon collecting our second CP.


Our 3rd CP at South Mills/Bradley was easy and fast to reach as it was mostly downhill.  The trails were in unbelievably fantastic condition.  It was here, along Squirrel, that I was able to take the time to enjoy the forest.  The birds were singing, the wildflowers were blooming, and the creeks were rushing with life-giving waters.  Quite the opposite of last year, when I was so covered by rain gear and could barely see the trail ahead of me.


Our next stop would be Stephen Janes' grilled cheese station.  But first, we had to climb, climb, climb out of the hole we went down to.  What stood between us and the sammies were the 18 creek crossings of Bradley Creek Trail.  With temps rising into the 70's, these crossings did wonders for my feet and legs; I told myself this was active recovery as I plunged into the icy waters.  It was on this trail where Lisa and her adventure racing skills excelled.  She was just inches from walking on water.

Once we topped out onto 1206, I was a bundle of nervous energy.  I had restless leg syndrome; they wanted to go, go, go.  So I did.  And I noticed Lisa did not seem to be as chipper.  I slowed, she hooked back on, and I went.  And she popped off.  Uh-oh!  Right then, I knew something was not right.  At this point we were 4 hours in, had been fueling well, bikes were running smoothly.  I blew it off, thinking that she would come back around after the grilled cheese.


I downed a 1/2 can of Coke and ate 3 slices of bacon (I had brought) while Lisa worked on a full can and a 1/2 grilled cheese.  I met Jaimee Johnson who said she reads my blog and told me how it has helped her on an occasion. That and Stephen's generosity was added fuel to finish this little race.

As we began our climb up Laurel to our 4th CP, Lisa's stomach turned sour.  Our pace slowed remarkably.  She likened the feeling to a volcano that was about to erupt.  I felt so bad for her, yet could do nothing other than try to liven the mood.  But I know that feeling when your body just won't respond ... I think we have all been there and done that.  We both tried to figure out what went wrong.  Lisa thought it might have been the Coke; I thought it might have been the all the bread she had eaten (she had a PB&J earlier) as she had just recently cut most of the gluten out of her diet.  It would not be until a week later when she did a training ride and discovered that it was the Infinit that was the cause.


At the top of Pilot, Lisa was in such distress that we had to take a break.  While I waited I pulled out the map to look at the remainder of our route.  It seemed pretty straight forward, but I was running the numbers to determine if the 7th CP would net us bonus time or be a wash.  Highly unlikely as Lisa's GI was in mutiny.

We descended Pilot and then began to work our way over to our 5th CP at Slate Rock. Descending down 1206, I lost my focus as I was concerned about Lisa and our ability to finish.  It was here I had a brain mechanical and overshot the trail head ... like REALLY overshot it.  Lisa, even in her misery, still had the navigational skills of a homing pigeon and questioned my direction.  Sure enough, we were at the 2nd Pilot Cove Loop trailhead.  As we rode BACK UP 1206, I was mentally kicking myself for that stupid mistake.  As if Lisa needed more mileage and climbing.  I was more mad at the fact of letting her down than by losing precious time.

Getting to Slate Rock Overlook was hard and agonizingly slow.  Lisa was feeling so bad that she did not even realize that BJ was manning this CP.  Fortunately we were able to make quick work of the descent back down to 1206.  It was here that Lisa began to feel a little bit better and we motored to Hwy 276.  Pulling out the map while getting water out of the creek, we decided that it would be wise to get the CP at Avery Creek and then head home.


As we were getting our last CP stamped, Rich and his partner flew in!  I had not seen Rich in this frame of mind in a long time.  His face was fierce and full of determination.  They were racing like scalded dogs!  They won the SS division and had a top 5 overall!

Once again, I must thank Lisa for her memory and clarity.  This year we took Buckhorn Gap out to the road as opposed to following Avery Creek to the end.  That saved us a solid 5 minutes. After my 15-20 minute mistake earlier, it was a small victory. I think we surprised the team that we had been yo-yo'ing with all day when we blew by them on the 477 descent after they had taken the Avery Creek route.

After all the hike a biking earlier in the day, the last little bit up Black Mountain seemed like a molehill.  Then it was all fast and happy down Black to the finish!


Even despite our misfortunes, we managed to make the top step in the Women's division (there were 6 teams).  I am SO PROUD of Lisa.  She endured to persevere through 6 hours of pain.  And when I really think about it, we still made pretty good time.  I am thankful to have her as a team mate; we are a good set of checks/balances.  I would not have wanted anyone else for this race.  A week later, I am happy that she figured out what turned her stomach upside down as she has some pretty big adventures left this year. 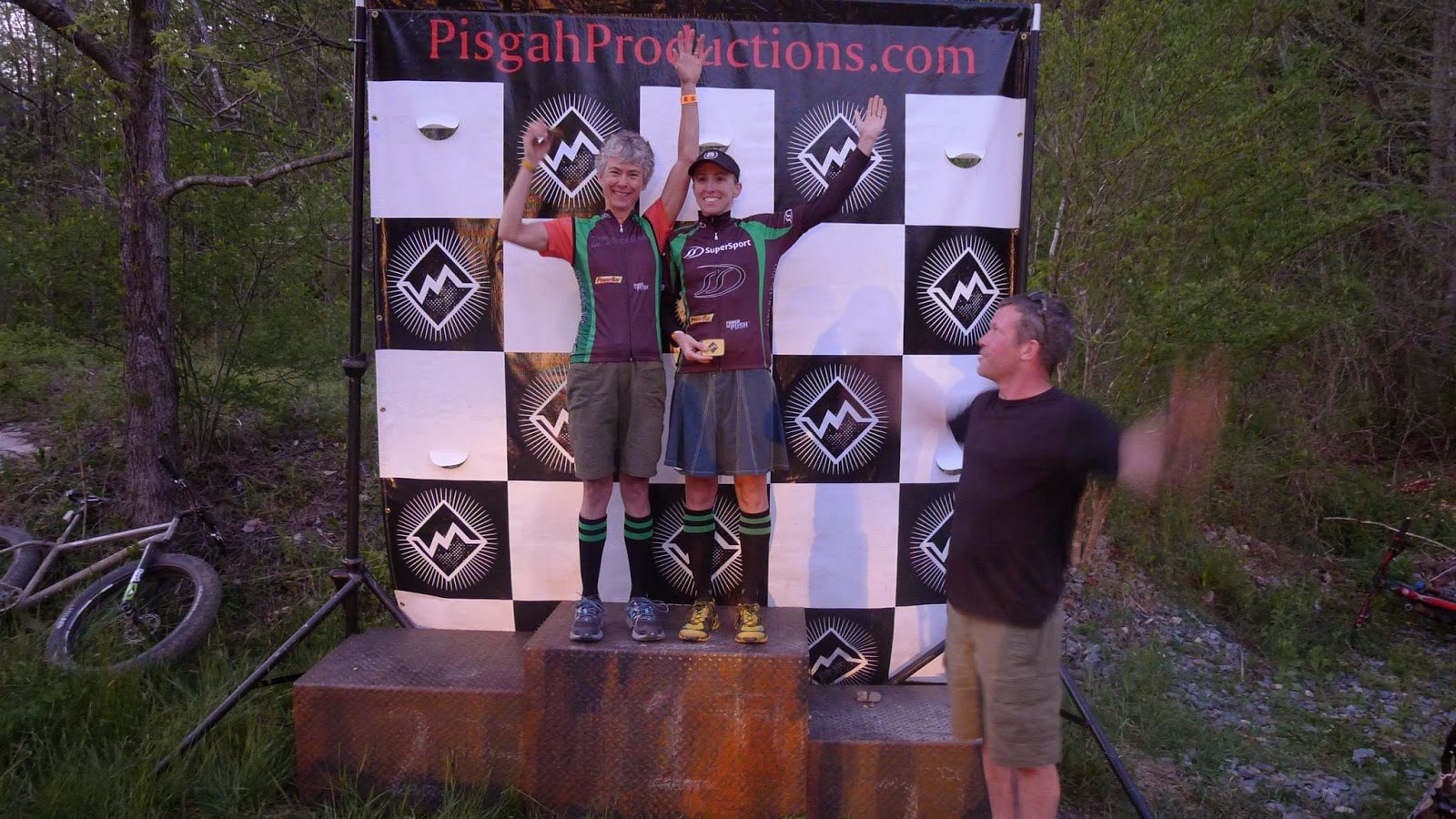 I am hoping that this weather pattern will hold and I will be able to see the trilliums in full bloom in a little over a week as I get ready for P111/55.5.