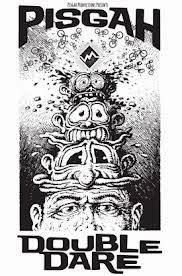 
I worried myself into a mental mess in the two weeks leading up to this final race in the King/Queen of Pisgah series.  The biggest fear, especially after the Wilkes 100K was getting miserably cold ... and wet.  After that it was fretting about the fears of bike mechanicals and not meeting my partner's expectations.  Lisa Randall is the queen of adventure racing.  I knew she would see me through, but I did not want to be a burden to her.  We have been team mates before (2008 TransRockies and 2013 PMBAR), but this was a 30 hour race in what could be brutal conditions.

Saturday morning we rolled into the Cove Creek campground with plenty of time to get ready.  The weather could not have been better ... for Pisgah in November.  Yes, it was cold, but dry.  We readied our gear, checked in, and then prepared our vehicles for the overnighter.

At 11:50am, the soul crushing Eric Wever, began the pre-race meeting.  At 11:57 am, he said that our passports would be awaiting us at Bent Creek Gap.  My mind tried to figure out where that was in the forest.  And then it hit me!  That was at the other end of the map!  Then Eric said that this was a time trial and the first 3 teams would get time bonuses.  We immediately knew we were not in the running.

At noon, the race commenced.  As we began pedaling out of the campground, a bunch of front runners took the Cove Creek trail.  For a moment I contemplated turning around and heading that way, but decided that FS475 to Hwy 276 would be about the same time and a much easier warm up for the long day.

As we began our journey, Lisa casually asked how long was this time trial (read:  slog) going to be.  Oh, about 25 miles.  I wish I could have seen the look on her face!  We hooked up with Kym and Jason and rode their coattails up to FS 1206.  I will take a free pull any day.  Kym was currently 2nd in the Queen of Pisgah; this time spent behind her allowed me a chance to assess their strengths and weaknesses (if any).  As we passed the intersection of Hwy 276 and FS 475B, we saw Sam Koerber and Zack Morrey turning onto the pavement.  I was much reassured as I had picked the most efficient route.

Once on FS 1206, we decided to let Kym and Jason go, as their pace was unsustainable for an all day adventure.  No sense blowing up in the first couple hours of a 30 hour race.  It took us 2:12 to ride up to the gap.  Sam Evans and David Wood made it up in 1:42.  It was great to see Shanna's face as she handed up the passport.

Within 12 minutes and without too much disagreement, we had a general idea of our route.  Lisa had visions of grabbing 6-7 (not including the special tests).  Being a little more familiar with the forest, I was realistic with 5.


We both put our rain jackets on for the chilly descent back down FS 5000.  The climb up to our first CP went by pretty quickly and we were off to our next.  We went back down FS 5000 to FS 5001.  We had to dismount and walk our bikes past a group of horses.  Dodging poop piles we made our way up to our second CP.  Lisa gets an A+ on time management.  Every time we stopped she was whipping out the map and plotting, even if it was for only a minute or two.


Back down FS 5001, we had to bushwhack around the horses.  I managed to get a small pine limb wrapped around my rear derailleur pulleys.  Had it not been for Lisa mentioning this danger, our day could have ended there, 4 hours in.

From there, we decided to go hit the mandatory.  The leaves were thick on Laurel Mountain Trail, making the hike a bike sections very slippery.  Dry leaves + rocks + cycling shoes = potential ankle/knee buster.  This section took us about 1:15 to reach the checkpoint (intersection of Laurel Mountain and Pilot Rock connector).  With darkness approaching it made Special Test #1 quite entertaining.  We chose the hackey sack over eating the jalepeno.


We made the hackey sack toss on the fifth and final try ... at dusk.  We also made the video:  see our 5 seconds of fame around the 2 minute mark.  I am glad we opted NOT to eat the jalapeno, as we had only 12 ounces of water between us.

We opted to do Special Test # 2 as well.  This consisted of running up to Mount Pisgah, 2 miles up, 2 miles down, with a elevation gain of 1700 feet.  The last mile I will call "stairway to heaven."  I felt like I was on a stairmaster; nothing but rock ledge after rock ledge.  However, it was pretty cool to be doing this in the dark.  At the top, I quickly snapped a picture of the tower, as the winds were heinous.  Including the time to change into and out of our running shoes, it took us about 2 hours to grab this bonus.  It wasn't until the end of this run that my feet started to get painful


On the way back down, I developed a pretty serious headache, most likely from dehydration.  Luckily, Lisa had some Vitamin I in her first aid kit.  I forgot I had stashed a Red Bull in my pack, so Lisa and I split that little burst of energy.  At this point we were completely out of water, but figured we could fill up at the creek at the bottom of Pilot.  Once I was back on the bike, my foot pain subsided.

Descending Pilot is difficult enough during the day, but take away light and add a ton of leaves and it gets quite interesting.  I checked my ego at the top; after 8 hours and 50+ miles of racing, now was not the time to make a mistake.  Once at the bottom, we took a break to eat and refill our Camelbaks from the creek.  Damn, that was some great tasting water!

It was now 8:30.  Time to buckle down and grab 2 more CP's before heading back to camp.  The ride along FS 1206 went by quickly.  Lisa had let me borrow one of her Lupine Piko's.  What with 1200 lumens, 4+ hour burn time, and ultra light weight, I was really enjoying the night riding.

While on this stretch of gravel, I was able to reflect upon how blessed I was to be able to do what I love to do, despite the hiccups in my path the last few years.  This is what life is about:  living, not just existing.  Fulfilling the passion, testing the mind, pushing the body.  Being able to share the adventure with Lisa just takes it to the next level.  We fed off each other's positive energy.  And when one of us was having a tough moment, the other was able to step up and be that "crutch" to lean upon.


The push up Club Gap was definitely more pushing than riding.  The leaves were DEEP and with all the loose cat head rocks, we both kept spinning out.  Better to conserve energy by walking; this also allowed us an opportunity to eat again.  From there we set out on Buckwheat Knob.  I had not ridden this trail since the inaugural Pisgah Stage Race, but I did not forget the gnarly descent.  By this time I was so tired of walking, I just wanted to let it go on the descent.  Luckily my brain was still functioning and won the battle.  Back to walking ...  Slowly but surely we made our way over to the next CP.

Notice that there is a theme to our checkpoint acquisitions.  I take the pictures while Lisa stuffs her face with food.  Her hummingbird metabolism was having a hard time keeping up with our efforts.  Towards the end she had a hard time taking in enough calories.  I was doing very well with my nutrition.  I am pretty sure that being Paleo while off the bike has allowed me to utilize the diesel (fat-burning) engine to a greater extent so that during hard efforts, I still burn more fat than carbs.  In years' past, when I was a carb junkie, I had to maintain 250 calories/hour to maintain, but this year I have noticed I can race just as hard on 175-200 calories/hour.

Once we acquired our 5th CP, we headed down Coontree and back to Cove Creek camp.  We arrived to cheers and bells and a warm campfire.  After checking in, we headed back to our vehicles to eat and get ready for the midnight special test and Day 2.

This last special test was worth a 1/2 CP.  It involved a 1 mile race around the campground.  All we had to do was participate.  While I was waiting for midnight to roll around, I changed clothing and managed to eat an 8 ounce hamburger, a banana, a sweet potato, and a 1/2 bag of potato chips.  I chased it down with 16 ounces of chocolate almond milk.  Where did it all go?  It did not hamper me one bit during the midnight race.

I managed to get to bed at 1 am for a few fitful hours of sleep.

The weak choose not to suffer. The strong choose pain, trading it as currency for moments of exquisite conquest.

Awesome Carey. Your writing and pics make me want to do that race.