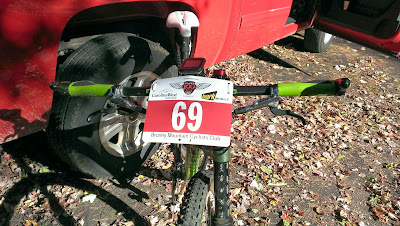 This was the inaugural race that showcased the trail systems of Wilkesboro, NC.  From the fast flowy nature of Warrior Creek and the Overmountain Victory Trail to the punchy, rooty ups and downs of Dark Mountain, this race was all about laying down the hammer.  The trails were interconnected with short bits of pavement and gravel.

The Saturday morning wake up call came early.  I had been in Asheville acquiring my 20 hours of continuing education in veterinary medicine.  I decided to play hookey on Saturday to journey up to Wilkesboro and ride some kick ass trails.  But when I woke up tired and looked at a temperature of 26 degrees, I knew it was going to be a tough day in the saddle.

Driving up to the venue, the sun rose up over the mountains, but the temperature did not change much.  It was 28 frickin' degrees at the start.


130 riders lined up for a neutral start.  A little too neutral for me.  We were escorted by the sheriff for the initial 4 miles on the pavement.  After the first mile, I noticed that my front wheel was wobbling ... really bad. Was  the wheel coming loose?  I finally recognized the problem.  I was shivering uncontrollably!  Please speed up Mr. Policeman, so that I can get warm!

Once we were directed off the highway and onto Jess Walsh Road, it was game on!  Although my hands and feet were blocks of ice, at least now my core was warm.  And then, about 40 of us were suddenly slamming on our brakes as we were being funneled into the OVT.  It spread out pretty quickly, however, and soon I was in my own bubble of pain.  For some reason, I felt like I was just not firing on all cylinders.  It was probably a combination of the cold + late season + unfamiliarty with the trail.  As I was cursing the cold, Kip came up suddenly behind me on his SS.  He politely stated, "Hey, its Carey.  We must be getting close to the front, " and "That's a really good looking bike," referring to my Niner Air 9 RDO.  But what I think he meant was, "Are you having a problem with your bike?  Why are you going so slow?"  I let him and his friend on by, and they blew past me hammering up a short hill.  They were on fire and looking so strong.

Even though I was not feeling my best, I must say that the OVT, with the new Berry Mountain loop and all its tight, twisty bermy trail, was really fun.  It flowed so well I found myself not needing to use my brakes so much, which was a blessing since I could not feel my hands at all on this trail.

Once on the Dark Mountain trails, I began to feel a little better.  Guess the diesel had finally engaged.  That was good as there was more extended climbing here.  The trails were also alot more eroded than when I had done the Burn 24 Hour race in 2010.  I could not imagine doing 27 laps here now!  As I worked my way through the roots, rocks, and leaves, I caught up to Mark.  He had decided to race today just the day before; his way of getting an extended training ride.  We rode together for awhile, but then he got some grass wrapped around his derailleur pulley and had to stop.

Back on the OVT, I slowly but surely began picking my way up through the ranks.  Those who had buzzed past me earlier were now feeling the effects of their efforts.  Although these trails are not hard, they require you to be constantly on the gas.  Towards the end of the OVT, I caught up to Tom from Richmond, Virginia.  This was his first experience on these trails and he was a tickled as a kid in a candy store.  Together, we worked to try to make short effort of the paved section back to Warrior Creek.  The HEADWIND did not help!

Warrior Creek was ridden clockwise (opposite of the 6 hour race).  I am not sure if it was the direction or the fact that it was at the end of the race, but that lap seemed to go on FOREVER.  I swear the BMCC added an extra 5 miles somehow.  Oh, and throwing in that nasty pavement climb of 20 % was brutal!  The Headwaters Trail was new to me.  The perfectly placed pedal striking tombstone rocks made me wish I had those instant engagement Industry Nine wheels on my steed.  I managed to fumble slowly through this section.

I did manage a giddy smile as two guys who were following just a little too close on the uphill rock garden, toppled over behind me as I slowly picked my way though the rocks.  Don't ride "up my butt" guys!  This 105 pound "half-pint" doesn't have the torque to power through but rather relies on slow speed skill to pick her way through technical sections such as these.

Normally for me, during the last miles of any race, I get into the "barn-smelling" mode and am able to finish with a little kick.  Not today.  There was no gas left in the tank.  Those last two miles  hurt!  I still managed the win, though, with a finishing time of 5:00:44.

Later, when I totally up my nutrition, I realized I had not drank enough.  55 ounces over 5 hours when it should have been at least 80-90 ounces.  Total calorie count was adequate but hydration status was not.  As long as I have been doing this, you would think I would have nutrition down pat.

Still, it was a great day to be in the woods.  Jason, Paul, and Co. put on another wonderful event.  They felt bad that the podium schwag was subpar compared to 6WC, so they gave everyone cash instead!  And the T shirt was dedicated to one of their club members who was diagnosed with breast cancer.

great to see you out there carey!! I agree, with all our miles at WC youd think we would know our way around it but that last "lap" was waaaay longer than anything i anticipated. Kudos on another W!