Last weekend I headed down to Conyers to team up with Tyler Murch in the Coed Duo division.  The SuperSport crew was there in force.  The weather was perfect and my legs were sparkly.  I let Tyler start us off, as the parade lap was not single speed friendly.

While Tyler was out on Lap 1,  I tried to stay relaxed and calm, but this "team" thing was new to me.  I felt like I had "restless leg syndrome."  I went up to the transition area WAY too early, but I was eager to pedal. Sean came through first, Shaggy second, and then Tyler ... about 2 minutes off Sean's time.  The first timing chip exchange was messy!  My bad, I was all thumbs.  Finally, I got it wrapped around my ankle.  I was off like a greyhound after the mechanical rabbit.  Let's just hope I could catch 'em.

The course was opposite last year's and there were some short change ups as a large area had been logged and some trails were re-routed.  Overall, it was FAST!  Having said that, I was spinning a cadence of 120  through a lot of sections.  Where are the climbs?  I thought my legs were gonna fly off at the hip joints.  I managed to catch and pass 1st and 2nd before the first of the climbs.  The climbs were short, but steep.  I was worried that I chose too easy of a gear as I was still spinning a pretty fast cadence up them.

My tire selection was perfect for this hard packed course.  The Specialized Renegades were rolling fast and hooking up when needed.  Once I was in the lead, I was able to settle in to a slightly less hectic pace and enjoy the ride.  Until I popped out of the woods and saw a flat stretch of double track that went on forever.  Time to ramp the cadence back up!  I forced myself NOT to look over my shoulder on this section.  I came through the transition area, giving Tyler a little breathing room for his second lap.

While Tyler was out, I refueled and tried to relax.  But with lap times of around 35-37 minutes, it was difficult.  I was trying out a new thinner chamois that James gave me, but it was attached to bib shorts.  That made pee breaks interesting!  Bibs were new to me.  I like the feeling of nothing binding at the waist, but it extended my port-o-john time considerably.  This new chamois was a perfect mate to my tush ... I did not even know it was there.  That plus a two-finger dip of Chamois Butt'r and my body parts down under were in heaven!

Tyler came through first and of I went on my second lap.  I was more settled for this lap, cadence was less, speed was still up, and I was feeling the flow of the trail.  With about a mile to go, I hit a root hard, felt something pop, and my cranks spun freely.  I thought I had broken my chain, but it had just come off ... a first for me.  You would think putting it back on would be simple and easy, but not when your heart is racing and you are standing over your bike looking at it upside down with the blood rushing to your head.  That was just evil!  After what seemed like an eternity (probably 60 seconds), I was back up and pedaling.

After the exchange, I went back to the pits and tightened the chain "Carey-tight," which is just to the point of resistance when spinning the cranks backwards.  Afterwards, I "tooled" around with my daughter while waiting to go out for my third lap. 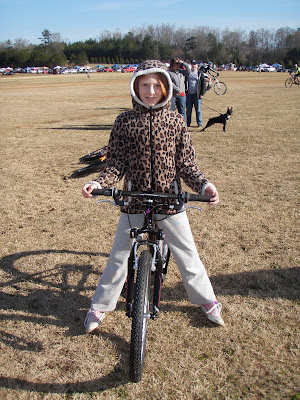 My third and fourth laps went by without incident.  I was happy with my gear selection as I began to feel the climbs.  I would rather be a more spinny and not have to walk the climbs.  Tyler finished us up with 9 laps and we took the W!


Finally, I got a 29'r tire in my prize bag!  I do think the team thing is harder than solo.  It felt like 4 ITT's with short rest breaks in between.  Just long enough for the lactic to build up in the legs making the first few minutes of each lap a struggle to get moving back up to speed.  And the added pressure of having someone else relying on your performance.  That little chain incident made me realize the potential of going from first to last in a heart beat.  Having said that, it was great to get four superfast laps in as opposed to just knocking them out one by one at a slower, but steadier pace.  Change ups to my racing schedule keep it interesting and motivational.  I am looking forward to the next one.

Kudos to Jeff Clayton for taking the overall win!  He was on fire, getting in 9 laps AND was 6 minutes faster than us.  And I was happy to see some of my team mates snacking on sardines and tuna post race.  It works!  A big shout out goes to James Stankowitz, owner of SuperSport clothing, for the sponsorship and the feel good bib shorts.