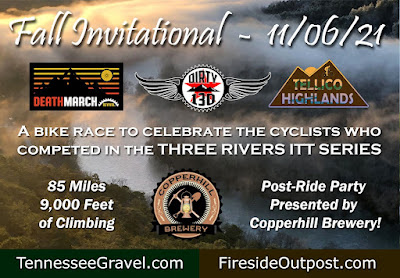 The brainchild of Tennessee Gravel's Shannon and Jedi course master Kim, the Fall Invitational is an invite only race that begins out of Fireside OutPost , near Gee Creek State Park.  In order to get an invite, you must finish at least one of three ITT's within a year's timespan, which runs from July 1 through June 30.  I did all 3, because that is how I roll.  And, it is in my "backyard"  and the routes are heinously hard, but also stunningly beautiful. 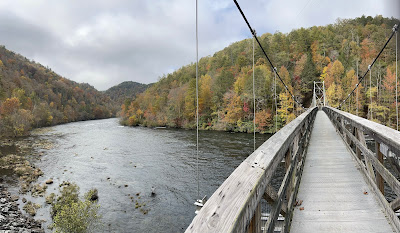 A handful of us bike crackheads showed up, some from as far away as Colorado and Michigan, to tackle this course on a beautiful fall day at the peak of color.  Not sure the exact number (25'ish) as the start was at 7 am and in the dark.  It was going to be a surprise course, meaning no GPX tracts provided, just cue sheets, but then Kim got soft as the starting temperature was right at freezing and did not want us to suffer with trying to pull paper out of our pockets with our Michelin Man hands all bundled up in winter gloves.  So she sent us the course the night before.  Turns out it was about 70% of the D130 course, but in reverse.

Although the start was chilly, I was able to stand by the campfire right up until Shannon said, "Go!"  My fingers and toes were sandwiched in between layers of wool, latex gloves, and chemical warmers.  I was able to hang with the fast guys for most of the way up Spring Creek Road, staying close to the draft while still allowing me to visualize the road and skirt around the dozens of potholes.  The legs were surprisingly there, but it was just a tad bit too fast once I hit the pavement so I let them go.

Turning onto Lost Creek Road, I was excited to be making good time at my comfortably hard pace.  But once the climbing began, my lower back began to moan, groan, and then full on seize up. WTF!  There had not been any previous indication in the week leading up to this event, and I had taken a chill pill from the gym to ensure all body parts would be happy.  But it was like someone was sticking a knife between L4 and L5 every time I tried to make power on the downstroke.  Hoping that this would only be temporary, as I have been dealing with this issue intermittently over the past 4 years, I kept the pace up and just dealt with the pain.

The gravel was groovy through this section.  Hard packed and fast!  I got to watch the world wake up.  The fog lifted revealing the stunning palette of color.  When I turned onto Smith Mountain Road (FS80), I realized that my race was quickly turning into a ride.  The pain had intensified and the grades of 15-18% on this stretch of chunky gravel made me think about bailing on the long route and just doing the shortie.  This was a SOB of a climb, even when everything is working.  Finally making it to the ridgeline, I was greeted with a spectacular view.  I stopped to photograph the vista and stretch out my back.

I made it to Graham and Cassandra who were manning the first checkpoint at mile 30.  Their support lifted my spirits while I threw down a banana.  Back on Kimsey Mountain Hwy, I wish I could say I blasted down to McFarland, but this road has really become eroded over the years and is quite chunky now.

McFarland Road only got gnarlier.  More of a double track over slabs of off camber rock and now covered in leaves, I was wishing I had a squishy bike and more rubber.  I soon came upon a fellow by the name of Tater who was fixing a flat.  I stopped to make sure he had everything he needed, which he did, and then motored on.  The rugged condition of this road had my back and bladder in an uproar.  I could fix the bladder part, so I stopped.  After the nature break which also helped to stretch out my muscles, I continued on.  At least it was mostly descending.  Tater caught back up and passed me back.

Just before I dumped out onto Kimsey Mountain Highway, I found Tater again, wheel off and looking pretty frustrated.  I stopped and asked  again if he needed anything. He had flatted again and this time he was out of tubes, CO2's, and his hand pump was broken.  At the point farthest from rescue, I gave him one of my tubes and CO2 (I always carry at least 2 of each, along with a patch kit).  After a brief chat, I continued on. There was nothing more I could do anyway and I was getting chilled and there was a big descent coming up.

Back on smooth grav grav, I hauled butt down for several miles.  The brief stop to help Tater also helped my back.  I was able to put some power back into the pedals on the final climb back up to FS236. It was roughly at this point that I began to see a few other cyclists out and about.  I was amazed that there were so many, but later came to realize that at least 4 or 5 in the event did the course backwards, by mistake.  As Chris Joice stated later, they took the Etrex route 😆😆.

FS236 came and went and soon I was crossing the bridge at the Appalachian Powerhouse.  Then for some buttery smooth pavement where I could do some on the bike stretches.  I stopped at one of the outhouses, applied some Chamois Butt'r, and changed out gloves and removed my ear warmer.  The sun was out and it had finally started warming up around noon.  Tater stopped to make sure I was ok.  I was glad to see him with working tires.  Together we rode to the next checkpoint at mile 53. During this time, he told me a little about himself: that he grew up on Childer's Creek Road, how an Indian medicine woman cured him permanently of getting poison ivy, and where the old still used to be.

Shannon's wife was manning the checkpoint.  I grabbed a caffeinated gel and a banana, thanked her for being there and headed out on Towee Pike.  I absolutely love this section of gravel. Tight twisty, both left/right and up/down, it flows well and for the most part is smooth.  I couldn't rock it out like I wanted to, but having Tater there to keep me entertained made my day.  I slowly pulled away from him on one of the stouter climbs and hit Towee Falls and then missed the turn onto Ivy Trail.  The reason being, is that Ivy got tar and chipped.  I was used to seeing asphalt and today it looked more like a gravel road.

I liked the past Ivy Trail much better.  Although rough in spots, at least I could hit the corners at speed.  Not today; too much loose tiny gravel.  Kinda the same feeling as when the forest service throws down a ton of #2 rock on the fire roads: no bueno!  And dayem!  Ivy seemed to go on forever today.  Tater caught back up to me as I was starting up Bullet Creek Road.  Being the final climb today and already into 9000 feet of elevation gain, along with a jacked back, my little goose was cooked!

We party paced this one, talking bikes, Litespeed (where he once was a welder), fork trail, and all kinds of nerdy goodness that allowed me to focus on something other than my spine. I was glad for the popping leaves and tree cover, as although the temps had risen 20 degrees, there was still enough chill in the air to where I did not have to shed any layers and then have the complicating factor of where to stash them.

The final checkpoint was at the top of the Starr Mountain climb at mile 70.  Low and behold who should I see but my favorite Tennessee gravel buddy John.  He had been able to stay with the leaders much longer than I, so I had not seen him all day.  One more banana and I was ready to finish this beast: just 15 to go and mostly downhill. 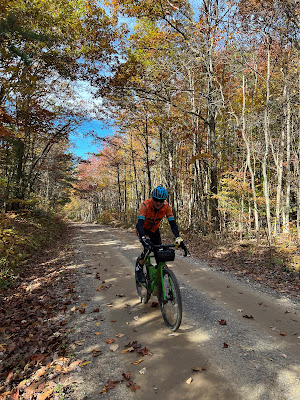 I was glad to have John there to get me through to the end.  We each chatted about how our day went and I would draft off of him when I could.  Tater caught back up to us along Spring Creek Road and we ended up riding into the finish together.  Whew!  What a day of both highs and lows.  It was a different kind of pain cave for me today.  I think I like the dead leg ones better. 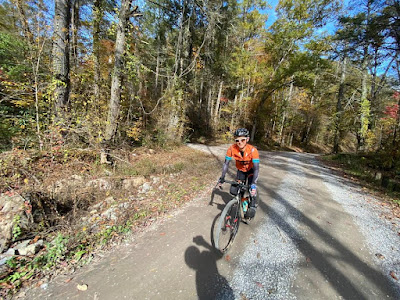 Anyways, since I was the only female, all I had to do was finish to get the WIN.  For me it was a hard fought battle between me, myself, and I.  The two things that kept me from pulling the plug were Tater's attitude and those three letters ... DNF.

Today, my back is still very sore, but at least I have a beautiful Sunday for some stretching and yoga.  And good memories of yesterday to reflect upon.

Thanks Shannon, Shannon's wife (sorry forgot your name), and Kim for an outstanding ITT series and final event.  I have enjoyed the battles I have fought and won (for the most part) along the way.

Oh, one more thing.  Always add 1000 more feet of gain to whatever is published on the website 😆 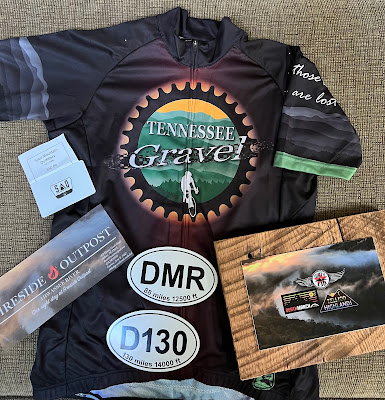 As much as I enjoy traveling to other parts of the country to participate in gravel races or rides, it just can't quite compare to what I have got right here, 30 minutes from the house.  Appalachia just has my 💓.