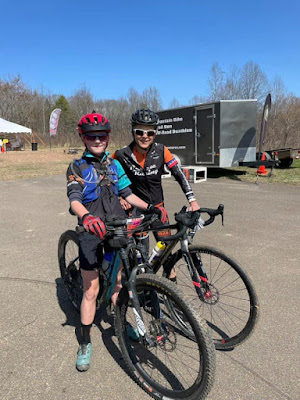 I was honored to be asked by Lisa Randall of Mountain Goat Adventures to chaperone her daughter during the Junior Race.   Their race was 30 miles long and excluded the Noontootla loop.  Chaperones were allowed to provide mechanical assistance, but we could not be their mule or provide drafting. I had been watching Jayden's progress as a pretty darn good racer and was anxious to see it first hand.  Lisa asked that I provide a little coaching during the race as she thought Jayden would listen to me better than her.

The race was started in waves, and our go time was 10:30.  There were 17 juniors and 5 in Jayden's class (14 and under).  Thinking the start would be neutral and not wanting to interfere, I stayed way behind the kids.  Nope!  It  was "balls to the wall," a race right from the beginning.  I was immediately dropped and over the next couple minutes slowly made my way back up to where I could get a visual on Jayden.

During the opening paved miles, I settled in next to Hailey's Dad and we chatted, all the while watching the race play out in front of us.  The whole pack had busted up, but the top three in Jayden's class were within sight of each other.

There were so many pieces of advice that I wanted to tell Jayden, but I stayed patient and allowed her to find her own way in the first miles.  Besides that, her competition was too close and I didn't want to interfere with any attacks.  So I hung back, watching, waiting, and reading her competitors' body language.

The first two juniors, Reagan and Hailey, were bigger than Jayden and would pull away on the descents and flats on the the first section of rollers. Jayden would make the time back up on the short climbs.  As we approached Winding Stair, Reagan got a gap and slowly pulled away.  Then, on the final short descent before the sustained climbing began, Hailey got away.  Now was my time to throw in a few words of wisdom along with a helluva lot of positive criticism.  It was super hard to read Jayden; she was a machine.

I will not reveal any of my secrets, but let's just say Jayden listened and put them into play.  About halfway up Winding Stair we caught sight of Hailey.  Pedal stroke by pedal stroke Jayden reeled her in. She then attacked with 1/2 mile to go, on the steepest section of the climb.  Hailey popped quickly and I just kept giving Jayden reports of how far behind she was.  Jayden decided not to stop at the aid station.  I gave Loretta a high five as we motored on by.

Next we worked the rollers over to Cooper Gap.  Jayden would eat and drink on the flats, stand and hammer to crest the climbs, and pedal like a banshee on the descents.  She got her second wind when she caught sight of Reagan on the final climb to Cooper's.  But together we also noticed that Hailey had rallied and was no more than 20 seconds behind us.  Oh, man, this race was on!

Jayden couldn't catch Reagan and we lost sight of her as she crested the last climb and began to descent Cooper's.  But, we also had pulled away from Hailey a little bit. I encouraged Jayden to pedal as hard as she could on the descent, but also be mindful of oncoming traffic.  Good Lord, I shouldn't have said pedal.  She released her inner Tracey Hannah!  I was hard pressed to keep up with her on my gravel bike, what with my eyes tearing up so bad from the cool wind and trying to avoid all the embedded rock on my skinnies.  The Mom in me wanted to tell her to slow down, but the racer in me could see her skills and knew she would be just fine.  She even rode smart and stayed on her side of the road, so at least I didn't have to worry about her becoming a hood ornament.

Jayden only got squirrely once and that was on the final corner that led us to the 4-H camp.  It was there that Hailey caught her and passed her with fervor.  But on the next short rise, I could tell that she was riding on fumes.  Jayden caught back up to her and they rode together for a bit.  Then Jayden caught sight of Reagan, stopped at the crest of one of the many small rollers that would make up the final 5 miles of the course.  That was all Jayden needed to unleash the beast!

Jayden immediately dropped Hailey on this climb, and then proceeded to pass Reagan too. I knew that if she could just crush the hills, she would win!  Those final miles were nerve wracking for me, encouraging her to push through the pain and fatigue.  Jayden listened to my words and absolutely turned herself inside out.  She ... was ... on ... fire!  As she hit the Monteluce property, I told her to smell the barn and go for it.

Holy smokes, she had another gear.  Hit that creek crossing and sprinted up the hill.  I was gasping trying to keep up with her and then, with an audience at the crossing, had to invoke all my skills not to keep from biffing it on the rooty ledgy climb out of the creek.

Jayden crossed the line in 2:30:56.  Lisa was totally caught off guard, as she was not expecting her in until about 15 minutes later.  She lost her burrito trying to pull her camera out.  And missed the photo opp!

I am still awestruck by Jayden's fitness and skills.  I got to witness them firsthand and it was so so so cool to see this 11 year old just absolutely crush it ... with the face of the Terminator!  This will go down as one of my two most memorable Southern Crosses, the first of which was the inaugural one where I was on my 26" Specialized Era, racing in the most muddy of conditions, and catching the first place woman on the second to last climb, passing her, and then gunning it up Mulberry Gap's infamous hill to win.  Sorry, I just had to reminisce.

Huge congrats to Jayden on her first gravel race win, of which I am sure there will be many more!  You owned that course today, lassie!  And just think, when I was 11, it was all about those Saturday morning cartoons.

Posted by Carey Lowery at 12:23 PM
Email ThisBlogThis!Share to TwitterShare to FacebookShare to Pinterest