I try to have an off season in November and December.  But then I got an email from Topview Sports Tim. This 70 mile gravel race had 3 timed segments, ranging from 8-14 miles, and included both a climb and a descent.  Results would be based only on the segments.  I liked the idea, especially this late in the year, of crushing the segments and then party pacing in between.  Sign me up!

I did the 100+ mile version of this last year.  Only a handful of poor bastards had signed up for this distance, so this year Tim cut that one out.  This year there was a 23 and 33 mile distance as well.  Having done 2 of the 3 segments last year, but in reverse order, I knew that I would be faster and have more fun on my mountain bike.

Race day temps were going to be exactly the same as when I did UnPAved a couple weeks ago so at least I did not have to think about what to wear or how to layer.  The start was neutral on a greenway and brrr ... cold!  For the first 5 minutes I was shivering so much my bike was shaking.  But after we departed from the greenway onto the road, the course began to climb as well as my core temperature.

9 miles in was the first timed segment.  It was 8 miles long and on a tame dirt road.  I thought I was warmed up, but when I throttled it, my legs were like ... whaaaat?  The air was cold and it hurt to breathe that intensely.  I had to back it off a bit less I implode.  About halfway through, I started feeling good and brought the intensity back up.  0:34:14 later I crossed the timing mat and rolled up to the aid station.  Rather than my usual NASCAR style pit stops, I took a few minutes to refuel and wait for my HR to come back down from hummingbird mode.

I then took a fairly chill pace over the next 13 miles.  Most of it was pavement but on quiet country roads.  I was not liking how my legs felt; extremely full of burn anytime the pavement went up.  Guess they were objecting to this "off-season" race.

The second time second I was familiar with as I had done it in reverse last year and had also ridden it this way during my TNGA days.  The Wildcat Road climb was brutally beautiful ... up, up, up for almost 9 miles and 1500 feet elevation gain.  It had deteriorated over the years and although it started out smooth, it soon became lumpy.  And that last mile is a doozy!

With this segment being 12 miles long, I started off slow, as I had stopped at the aid station prior, to refuel and shed some clothing.  Once the dirt started to get chunky, I attempted to pick up the pace and the legs responded better this time.  I knew this would be at least a 1 hour effort, so I set a comfortably hard tempo; I wanted to not be completely gassed as I knew the descent off of Addis Gap was gonna require some focus and skill.

Towards the top, I was passed by another woman.  I made an effort to keep her in sight, but once the road turned to more of an ATV trail, I lost contact.  I knew the top was just right around the corner, or maybe two or three, so I dug a little deeper.  Crossing the AT, I felt that I could catch her on the descent, as she was on a gravel bike.  It was a tough haul downhill.  The fresh leaf fall covered up large loose rocks and tree limbs.  That combined with the shadows made it extra sketchy.  I was glad for my front fork and 2.0 tires.  I soon caught and passed many a gravel bike, as well as the woman who had passed me and two others.

After about a mile the trail turned morphed back into a lumpy gravel road and I was able to pick up the pace.  A guy on a mountain bike caught me and together we had fun ripping down this road at speed.  Towards the end of the segment it got pedaly and I forced my legs to turn over the cranks with some power; I did NOT want to be caught by anyone.  I hit the timing mat at 1:11:58.  A little over an hour of climbing combined with a hard fast descent put a hurtin' on me, but in a good way.

At the aid station, I took off another layer and refueled.  I knew I had a slog up Hogpen Gap and it was warm in the direct sun.  It was a slow go up the pavement, with cars whizzing by at high speeds.  I was a little more than nervous and wanted to get this next 5 miles out of the way quickly.

The third and final segment began off of Hogpen Gap.  It was 14 miles long, with a short climb followed by a sh!t ton of descending with a few rollers thrown in the mix just to let your legs know the show was not over yet.  The initial climb was short, followed by some sa-weet extended downhill on a lightly graveled fairly smooth road.  But the turns were tight and I was glad to have a little extra rubber in the corners.  The extra climby bits I just suffered through, knowing that the timing mat was just a few miles ahead.  It was a shame I could not take any photos here because it was just so gosh darn beautiful.  The last 2-4 miles was flat turning into pavement the last two.  By now I was on the struggle bus to keep my steed moving quickly.  I thought I saw the traffic cone just ahead and I gunned it only to realize in the final yards that it was not the timing mat but just a caution cone for a bump in the road.  Arghhh!  Onward, legs, onward!  Finally I saw the mat and crossed it in 1:00:35.


Grabbing a banana and some water at the final aid station, I soft-pedaled the last few miles over to Unicoi State Park.  The final miles were some rewarding single track through the park.  I made one wrong turn and got some bonus descending/climbing in before getting back on the proper trail.  I managed to eek out a bit of energy to zip along this dirt ribbon back into Helen.  I crossed the finish line in 6:19:36, but it was only the timed sections that mattered.  I was happily surprised to have met my goals: 1) have fun  2) not crash  and 3) podium (1st). 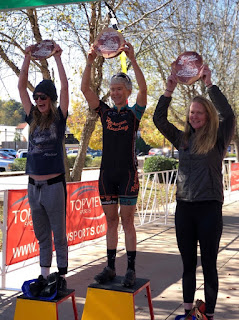 That ... was ... really ... fun.  I hope to see more of this format in the future, because sometimes I don't wanna go hard the whole time, but have an oxygen-rich opportunity to take in the beauty of the land surrounding me during these events.

Mark it for next year:  Georgia Gravel Grinduro