Lisa Randall and I teamed up. Five years ago we toed the line and sped off at warp speed, as I was chasing the Queen of Pisgah and hungry for victory.  This year, I just wanted to have an all day adventure in the woods with no strings attached.  Meanwhile, Lisa, was still recovering from an NUE race director hangover.

We arrived at the Hoffmeister Temple Friday evening and Beth prepared us an extraordinary last meal.  She definitely went the extra mile with a chicken pasta dish topped with goat cheese and toasted pine nuts and a mixed green salad with dried blueberries.  Her culinary skills are top notch.

Race morning was warm and dry ... wait, what?  This not Pisgah. Looking at my weather app at 5 am, I saw the heavens were expected to let loose with a torrent of wind, rain, and hail around 1pm.  Now, this is Pisgah.  Passports were handed out at 8 am and the game was on.  I had heard about the 2018 version with the preamble Thrift Cove-Lower Black loop.

We got the joy of doing it again, in reverse, this year, too.  Lisa took the lead and began the 3 mile and 1200 feet elevation warm up lap.  I was busy trying to keep my heart rate low enough so I could process all the chatter around me, trying to glean any strategery from the locals, who knew the forest better than I.

After an hour, we finally made it to Pressley Gap.  I hopped off my bike, pulled out the map, and tried to think of how to go about collecting 4, possibly 5 checkpoints.  Trying to get my brain to work while my heart rate was still 160 was damn near impossible.  After circling all the CP's on the map, we began connecting the dots.  We opted to ride Turkey Pen to get the first mandatory at South Mills/Bradley Creek.  I had not forgotten the HAB on Black up to Turkey Pen, but these days, HAB's don't really bother me ... it is just part of the Pisgah experience.  For the first time, I truly enjoyed Turkey Pen because it was bone dry! 2 hours 46 minutes from starting our PMBAR journey, we grabbed our first CP.

Knowing how much rain this area has had in the past two weeks, I opted for taking Mullinax to Squirrel to upper Cantrell Creek for our second CP.  I could only imagine what South Mills and lower Cantrell would be like.  Besides, I LOVE Squirrel and had not ridden it since the 2018 Pisgah Stage Race.  Once again bone dry and with all the chirping birds lighting up the forest, I was in my happy place.  We came upon several teams going the opposite direction, which made me question my route for a few minutes, but I quickly pushed those thoughts out of my mind. The descent down Cantrell was pretty sketchy; most of it was under water and there were thousands of baby heads to contend with.  I opted more than once to walk my bike as the risk (broken derailleur) to reward (3 minutes faster) was high.

4 hours and 16 minutes from go time, we got our second CP at Horse Cove/Cantrell Creek.  Lisa's heels had taken a fairly good beating on the Turkey Pen HAB's, so while she tended to her blisters, I grabbed some water from the creek, relieved myself away from the creek, ate a couple hundred calories, and plotted our next move.

There was really no other choice than UP via Horse Cove. My bike was going to hate me, as it was pushed more than it was ridden.  And then the birds grew quiet and the sprinkles started.  Halfway up I ran into Patrick and had a brief conversation about how to go about snagging the 2nd mandatory at Farlow/Daniel Ridge.  We were both on the same page, so that made me feel good about my route.

Once we hit Funneltop, it was all downhill to FS1206 ... well, mostly.  At this point we were 5 hours in and Lisa began to fall a bit behind.  Up until today, 4 hours was about the longest she had ridden this year and after having a 72 hour adventure last weekend, I would say her body was in WTF mode.  The rain began to come down a bit harder and I put my shower cap on my helmet.  By the time we had finished Funneltop and were approaching the intersection with FS1206, the skies opened up.  I quickly put my rain jacket on, not to keep me dry, as I was soaked in my own sweat, but to keep me warm.

One lightning bolt struck close enough to make me double my cadence for about 30 yards before I realized that I couldn't outrun electricity.  I told myself if I am gonna die today, at least it will be on my bike. Once we turned on FS1206, we collectively made the decision not to go and get the CP on Pilot Cove.  Lisa's engine was sputtering and although I had my required head lamp, I really did not want to use it.  And who knows when and if this storm would let up.

So we turned left and began to make our way to the second mandatory CP at Farlow and Daniel Ridge.  The rain continued to pummel us as we dropped down 276 to FS475B to 225.  I didn't have to drink from my CamelBak, as I had enough rainwater mixed with sweat running down my face for my own electrolyte drink.


Daniel was a mess with water pouring over the million roots.  I was all over the place trying to stay upright.  Finally we arrived and got our passport stamped at 3:05 pm. We continued on down Daniel, crossed the bridge, took FS475 to Davidson River to 276 to FS477.  The rain was coming down enough for me to worry about us getting pancaked by traffic on 276 so I motored on as quickly as I could.

As we turned onto FS477, the rain began to let up, nearly 2 1/2 hours later.  As I approached lower Bennett, I mentally prepared myself for the HAB.  I also hoped Lisa would still talk to me afterwards, especially after we hit the super steep pitch where I had to lift my bike up and over some root/rock shelves.  Fortunately I had gotten ahead of Lisa and she was out of my sight on this part, so she did not have the opportunity to kill me and stash my body.

I stuck my passport through the small opening in the tent.  It came back out with some heavenly goodness.  They asked if I wanted a Snickers to which I replied yes.  What I wasn't expecting was a homemade one!  OMG!  It was so cold, I thought it was made with ice cream.  That marshmallow cream was all it took for a foodgasm!

It took 45 minutes to climb up Bennett but only 15 minutes to descend.  The water flowing down the trail showed us the line.  We popped back out on the gravel and began the final push back to the finish.  The sun began to pop out once we hit Clawhammer and it felt so good.  Maxwell went on forever.  We were both ready to be done, but still had to hit the HAB on Black before we could stop pedaling and enjoy the descent.

The  Gods of Pisgah weren't finished playing with me yet.  I was holding my own until I came to the root staircase with the sharp right-hander at the bottom.  I decided to dismount at the last second; as I got off the bike both feet slipped in the mud and I ended up bouncing down on my ass. With only an injured pride, I hopped back on the bike and continued.

Halfway down, my left calf began to cramp.  Holy Mother of God!  Normally I can slow pedal and calm down the angry muscle.  But that was not an option.  I just gritted my teeth and went faster.  I hit one rock garden with way too much speed, my front wheel hit a rock, twisting my bars so forcefully I almost lost connection.  How I managed to correct the bike and get it back on track I do not know, but am forever grateful because that would have left a mark.

Once I regained my composure I nursed the remainder of the trail.  Lisa and I crossed the finish line at 6:32 pm, 10 1/2 hours after beginning our adventure, with 62 miles, and 10,000 feet of climbing in our legs. 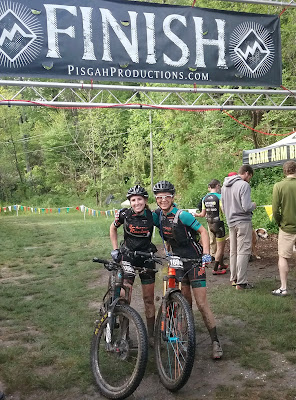 No land speed records were set, but we accomplished our goal of having a wonderfully suffery day.  Our route choice was good, although looking back now, I see where we could have made a better choice going after the last two CP's.  I was glad we chose to knock out the first two CP's the way we did, as it allowed us to ride Turkey Pen and Squirrel in perfect conditions.

This was great training for the Crusher in July, which we will be tackling together as well.  Feeling as well as I did also helped to boost my confidence for another challenge I will be tackling on Friday, which will have a wee bit more climbing. 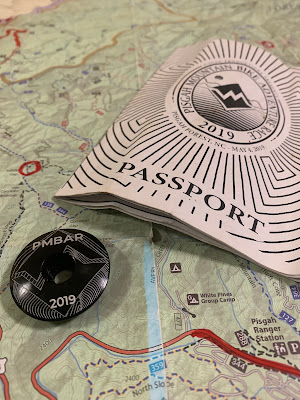 Thanks Eric for always challenging me and providing a course where I am not just following flags all day.  It is these style races that I have grown to love.  And thanks Steve for the photos.  What a master of photography you are!
Posted by Carey Lowery at 9:52 AM
Email ThisBlogThis!Share to TwitterShare to FacebookShare to Pinterest
Labels: pisgah productions, PMBAR