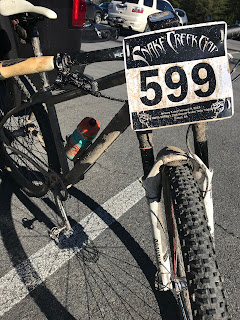 This year I opted to go back to the original, the meat of it all, the 34 miler.  After 3 years of racing the 50 mile edition, I was good.  The 34 has always been my favorite distance, but I did the 50 because that is where the $$$ were.  I also opted to ride single speed because of the simplicity and brutality of 1 gear.  2019 is the year of #doinghardthings in preparation for the Marji Gesick.  I also wouldn't have to worry about being in the wrong gear ... because you pretty much always are!

I definitely chose the right bike because The Snake lived up to its beastliness in that it was a mudfest!  Only 6 days into the new year and we are already an inch above average in precipitation!  The creeks and rivers were ragin'!  The starting temp hovered around 40 degrees.  My toes and fingers were toasty with the chemical warmers shoved in the gloves and shoes.  That didn't last long though as this was what the Armuchee Creek crossing looked like.


At only a mile in, I hit this bridge and immediately everything below my knees were drenched.  Bye bye chemical heat!  Over the next 3 miles of climbing up to the first single track, my toes turned to frozen blocks of ice.

The first bit of single track is the closest I guess I'll be to experiencing a cross race.  Ribbons of thick mud made the climbs a lesson in body positioning and steady torque while the descents taught me to be light on the brakes and bars and steer with my hips.  The blinding ball of fire in the sky also made things interesting as well. I was grateful for the warmth it began to provide, but not too appreciative when I couldn't see the trail and just had to trust that my cat like reflexes would keep me upright.

Amazingly Pine Needle Hill and the descent and trail that followed all the way out to Pocket Road was in fairly decent shape.  I was able to recover a bit here and ready myself for the remaining single track to the Snake Creek Gap SAG.  Although it was only 5.5 miles to the SAG, I am sure I spun my wheels enough to get in at least another mile based upon wheel revolutions!  The mud was insane! And of course, all uphill!  I wisely chose to hop over the 29'r wheel deep creek ditch prior to the mud wall.  I probably was influenced by the racer up head that took a nice endo attempting to clear it.

As I began the first of several HAB (hike-a-bike) sections either through deep mud or the loose, steep pitches where I could not stay on top of my gear, I used this opportunity to drink and stay on top of my nutrition.  It is much easier to forget this valuable part of the plan when one is not all hot and sweaty.  Not only was I burning an insane amount of calories from the difficulty of the course, but I was having to keep the fire stoked to stay warm.  Remounting was a challenge as trying to clip back in to the pedals when you can't feel your feet is darn near impossible.  More than once a most sensitive part of my anatomy got sucker punched by the top tube.

I rolled into the Snake Creek Gap SAG at the 1:54 mark, quite a bit slower than years' past, but given the nature of the beast, I considered it a small victory.  Mike helped me get in and out in less than a minute.  While I swapped bottles and gel flasks, Mike cleaned the mud off my glasses.

Thank goodness the Mill Creek Mountain climb out of the parking lot was leaf and mud free.  This is hard enough in pristine conditions.  At 1.5 miles in length, I was gassed when I hit the top.  I managed to sit and pedal a wee bit as I waited for my heart to settle back down to a life-sustaining rate.  This ridge line was in great shape and my shot of Espresso gel finally kicked in.  As I began descending down to the multiple creek crossings, the trail became muddier and soon just turned into a small creek itself.  Not being able to see the bottom of these crossings, I was happy not to have "boofed" any.

The fire road climb up to the last single track section was an energy-sapping slog.  I still felt like I was making good time; I was thankful for the caffeine's ability to lower my perceived exertion.  I passed several guys who had just come completely apart.  At least I felt that I had a bit left to negotiate the rock gardens that lay ahead.

It was nice to finally have dry trail.  The traction was good and the first half seemed to pass by relatively quickly.  But after the wall, the death march began.  At least I had Single Speeder Sponge Bob to push me.  I call him this because he had a shoe that squeaked when he HAB'd.  We went back and forth over the remaining 4 miles.  He would get me on the descents and I would catch back up on the climbs.

On the last pitchy climb, as I was walking my bike, a large stick somehow managed to wedge itself in my wheel, flip up, knock me in the right shin, and take me down.  Yep ... I crashed while walking.  That told me right there just how spent I was.

Despite going down, I somehow managed to catch back up to Sponge Bob and make a slo-mo pass and slowly pull away from him.  I was hoping to ride his coat-tails down the pavement.  But alas, I was once again on my own, in a semi-Froome like tuck, trying to gain every bit of speed I could muster.

I came across the finish with a time of 4:16.  Quite a bit off my best time and 16 minutes slower than I anticipated, but still proud to have emptied the tank.  And having sunshine and 57 degrees of heat at the finish made all the suffering and discomfort worthwhile.  And seeing all my awesomely sweet team mates! Despite the rough conditions, Rescue Racing made a respectable representation with several that will be defending their podium spot come February.