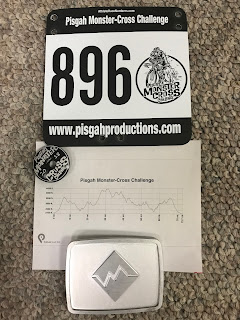 This year's course was different, lollipop style and not using the Blue Ridge Parkway.  The "stick" was 20 miles and the "pop" was 31 miles, with 25 of that being new gravel and pavement.  I was glad to have endured an out and back drive from my home a couple weeks back to recon the "pop."  My weapon of choice was my Niner RLT RDO.  Although the new gravel had some chunk to it, there was not enough to justify the Niner Air 9 RDO.  I ran Maxxis Rambler 40/38 combo.

At the start, the temperature was a comfortable 68 degrees, and conditions dry.  I looked around to see both familiar and unfamiliar faces in the women's field.  With no pressure being placed upon myself, I was looking forward to a day of brutal fun, which is what I would expect from a Pisgah Production event.

The start was controlled until the turn off onto FS477.  After that, the dust kicked up as the front runners pulled away.  I was soon among a few slowly churning up the 5 mile climb.  While I was waiting for the engine to come to life (which these days seems like 1 hour), I felt twinges of tightness and slight pain in my left hamstring.  Not like a cramp, but like I had a slight pull.  When the gravel pitched up and I had to up the wattage, the hammie would start to complain.

Me:  Hammie, why are you being so fussy today?
Hammie:  Probably because you made me run twice this week.
Me:  Well that should not be a big deal.
Hammie:  Well, it is.  I don't like it.
Me:  If you keep whining, I am going to go to Revive Massage Therapy and have Virginia work on you.
Hammie:  Oh, GOD!  Please, no!  Not those hands of steel!  I'll be good.  Just give me another 30 minutes to loosen up.
Me:  15 and it is a deal.
Hammie:

I endured the tightness up FS477.  Once on the ridge, I was able to connect with a small group and ride their coat tails down to Hwy 276 and over to FS475B.  Fortunately, the tightness and pain worked its way out on the short climb up FS475B.  As I was descending the 5 miles down to FS475, I was smiling almost the whole way, until I realized that I would be climbing back up this SOB in about 40 miles.

The first aid station was at the intersection of FS475B/FS475 at mile 15.  I had no need to stop and so motored on.

I felt life coming back into my legs as I climbed up FS475B and chatted with a JA King racer who had done the Ozark Trail 100, which is coming up in 3 weeks for me.  We were talking so much up the climb that we might have semi-annoyed another racer in our company.

The descent off Gloucester Gap had my eyeballs bouncing around in my skull with all the stutter bumps.  If that wasn't enough jarring to give me an "on the bike" concussion ... sheez!

Taking a right onto Hwy 215, I began the arduous 5 mile climb.  At least it was paved.  I settled into a rhythm which kept my heart rate in zone 3.  For the most part I was alone.  There was one group of 2 that passed me halfway up.  At first I latched on, seeking a little shelter from the wind, but when I saw my heart rate heading to zone 4, I knew I had to back off.

Then Mr. Squeaky Shoe showed up.  He passed me at a pretty good clip so I didn't immediately latch on.  And I really did not want to hear that god awful noise for the next 15 minutes.  But then he must have slowed up a tick or two as I was able to bridge.  Fortunately, the noise was a metronome for my breathing, so I just made a game of it and all was well.  I was able to push it slightly faster, get some drafting in, and do some good abdominal breathing the remainder of the climb.

Turning left onto FS4663, I passed Mr. Squeaky Shoe and saw some racers just ahead.  So now the carrot game ensued.  This section of gravel was more of a freshly graded dirt surface.  Mostly packed, but with some soft spots, I was grateful that it was not raining as this would have been a muddy mess.  This section was rolling and with just a few short kickers that I could stand and power over, I was in my zone!  Towards the end it turned down sharply and I had to be light on the bike as pointy little rocks began showing up through the dirt.

The gnarliest descent of the day was on FS 4663C, about 1 mile of pretty steep chunky and loose rock.  This was one place, albeit short, where a mountain bike would excel over a gravel bike.  I caught up to Rich here, but having a hard tail with fat tires, I soon lost sight of him.  I just told myself to settle and not do anything stupid, like bang a rim or slice a tire.  I had already seen at least 5 racers with flats leading up to this point.  I would rather be a bit tentative than have to plug or tube a tire.

Popping out onto Charley's Creek road, I rode onto the wheel of none other than THE Rich Dillen, who was questioning his decision to be out here today.  I am not sure what happened to his "old man watts" as he is usually far ahead of me.  Mebbe too much carbo loading the night before or mebbe (as I can attest to) being a parent of a teenager had his adrenals shot.  Whatever the case maybe, I think I stoked his fire a bit, as he passed me on the next section of gravel, Wolf Mountain Road.  This 5 mile section was fairly rugged on a gravel bike, what with dodging mud holes and wash outs, descending chunky embedded rock, and then climbing short but steep pitches.  My eyes were definitely glued to the "road." 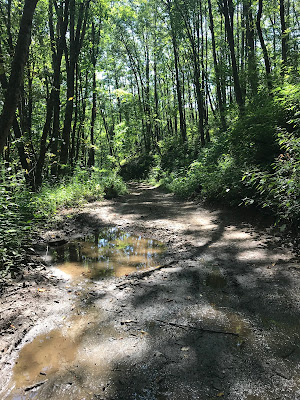 I came into aid 2, mile 38, did a bottle swap, and gulped a caffeine laden gel.  Hopping back on the bike quickly enough so that my legs did not think the day was over, I hit the second deep gravelly descent (the first was just before the aid station).  Not fighting the bike but letting it go where it wanted to, I "skied" down to where the road turned to pavement.

I let go of the brakes and enjoyed some free speed off the mountain, about 2 miles worth of curvy ass road.  That ... was ... fun! Turned left, rode across a bridge, and then the road went straight UP!  Ouch!  This 1 mile grunt had my legs calling me all sorts of terrible names.  Cresting the top, I enjoyed some more free speed downhill before hitting the final 4 miles of pavement back to Hwy 215.  After looking behind me and seeing no one in sight (I was hoping I could latch onto a train), I put my head in TT mode and drilled it. 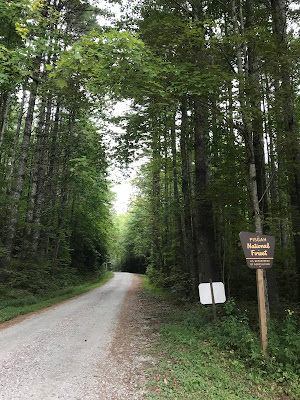 Hwy 215 came and went and then I was back on the "stick" portion of the route.  Indian Creek Road came and went as I had a racer pass me, which then encouraged the body to go a little bit harder. When I turned onto FS475 and hit the stutter bump section, I had to fight for every inch of that climb.  Too loose for me to stand and hammer, I had to sit and endure the back wrenching bumps.  Time seemed to come to a standstill here.  I finally hit Gloucester Gap.  My back still felt like someone was putting a hot iron to L5.  I endured the pain during the 4 mile descent, knowing relief would come during the 5 mile climb up FS 475B.

I think the caffeine finally kicked in on this arduous climb, as I flew by several racers.  One told me that I was the second woman.  That was a pleasant surprise, for all day long, I had no idea, other than Kaysee, who might be ahead of me.

It felt oh so good to just stand and hammer, giving the back some much needed relief. Standing for 20 revolutions, sitting for 20, I repeated this process until the short descent down to Hwy 276.  As I began the final climb back up the highway and onto FS477, I felt like I was carrying some pretty good speed.  But halfway up, I had a single speeder pass me.  I couldn't let him go without a fight.  I picked up my wattage and bridged the gap.  As we hit the rollers, I passed him slowly, allowing him to latch onto my wheel.  We stayed together until the gravel pointed downwards.  At this point I seemed a little more willing to take chances through the sketchy corners and dropped him.

As the road flattened out beyond the horse stables, I was in as low a gear as I could go.  I had two guys (who I had passed earlier on the FS475 climb) pass me doing mach 4 and didn't even have a chance to give chase.  They managed to just stay out of my reach.  Dang!  That would have been nice to tuck in behind them for the last mile or two!


Too tired to attempt barrier hopping, I at least managed to crawl over them without falling.  I finished with a time of 5:38:37, good enough for second.  But most importantly another coveted buckle!