I've been on Niner bikes since 2011.  My first Niner was an Air 9 Carbon that I built up as a SS. I no longer have her, but she is still on the racing scene, under the guide of SuperStrong Mary Sickler. The first of this year I got the RKT RDO and I've just welcomed the Air 9 RDO to my family. 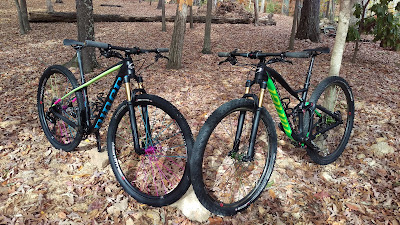 It has taken awhile to get "Echo" dialed in; that's my RKT.  Yes, I name my bikes (and still sleep with stuffed animals). Why Echo?  Because when I was in the Army, my MOS (military occupation specialty) was a heavy equipment operator.  Dozers, pans, graders, and front end loaders took skill and finesse to operate.  And so the same goes for her.  But once you have mastered the skill, it is an absolute blast to be in the saddle and raging single track.


I initially had a RockShox RCT 100mm installed on her, but it just didn't feel or act right.  I was able to warranty it (although I was not told what the problem was).  At first I waited to get my hands on the new RockShox SID WC, but the delivery date kept getting pushed back.  So I decided to try the Fox StepCast 32 Boost.  I am so glad I did.  It felt right ... right out of the box and after removing all the tokens.  I totally agree with Dickey on this fork.

SRAM's Guide brakes are on the opposite end of the spectrum as compared to the Avid's. Plenty of power and I just love how they feel; not squishy like the older Maguras I had on my Jet 9 RDO.

I chose a set of Pillar Carbon Industry 9 wheels.  This is the first carbon wheelset I had.  I really don't notice much difference in them as compared to their Ultralight aluminun hoops, but then again I am but a mere half pint.  What I do notice is that they go where you point them, the engagement is what I need for rock crawling, and the spokes/hubs are sexy!

Completing her build is a Niner bar and stem, Ergon grips, SRAM 1 x 11, RaceFace Next SL with Cinch direct mount, Xpedo M Force 8 Ti pedals, and a Specialized S-Works Phenom saddle. I also installed a Reverb dropper, which cost a bit of weight, but so worth it for confidence in descending the gnar.  Even with the weight penalty, she comes in at 22.8 pounds.

I am ready to take this one for a ride.  However, what with all the wildfires, my lungs would be all sad with any HR above 100 right now. So, she sits in the basement awaiting the rain.

I've outfitted her with the StepCast and the new Ultralite 235's. Industry 9's new AnoLab page where you can build your custom wheel set is super sick! Pretty much tried to build her similar to Echo, so that I can rob parts if I need to in an emergency situation.  The Guide brakes are probably overkill, but when I was running XTR's on my older Air 9, they just did not have the stopping power I needed.  I like the 4 piston power.  At some point, I would like to try the SRAM Level brakes.


Bruce built her up with an Eagle drivetrain and the RaceFace Next SL G4 with a Wolftooth direct mount 32T.  According to their website, it provides an ideal 49 mm chainline, as compared to RaceFace's 51 mm.

My intention for her is gravel grinds and shorter endurance events where I don't need the FS and drooper capabilities that Echo provides. Right now, she weighs in at 19.25 pounds.

I must give Mike Stanley of Niner, Bruce Blevins of The Outdoor Store, Industry 9, and Xpedo a HUGE thank you for providing me with a less than retail opportunity to shred on this machine.
Posted by Carey Lowery at 9:37 AM
Email ThisBlogThis!Share to TwitterShare to FacebookShare to Pinterest
Labels: Industry 9, Niner Air 9 RDO, niner bikes, NIner RKT RDO, The Outdoor Store