This race, put on by Dirty Spokes, would be my last event before "the biggie."  Being a lover of backcountry epic one big loop formats, I was having to really conjure up my inner ADHD hamster for this one.  But knowing what was looming on the horizon, this race was a perfect test of what I have been training for.

I had ridden the course the day before, running a 32 x 19, the same gear I had raced on when I did this race in 2012.  All the endless burpees, box jumps, shuttle runs, etc at Results Fitness had paid huge dividends, as the gear was way too easy! So I slapped an 18 on for the race.

While at the starting line awaiting the gun, I was happy that the short mostly upward pavement lead in to the trail was gonna be short and sweet.  I shouldn't get caught behind too much traffic. But then, at the last moment, Tim changed his mind as the original plan would have been too risky, what with a chicane style entrance to the single track. So he extended the pavement section another 0.3 miles for a total of 0.6 miles of asphalt to a straight single track holeshot.  I wasn't happy, but I understood. Challenge accepted!

Eying my competition at the start, I saw Amy and Rachel.  There were a few unfamiliar faces, and since the 3 hour racers were starting with us, I did not know who all was in my class.  No butterflies today, I am saving and growing my collection for the next race!  I spun my brains out on the pavement, trying to limit the number of racers I would have to maneuver around once I hit the trail. Once on the trail, I got to practice my track stand for the first mile, as the party train came to almost a complete standstill.  I was pleasantly surprised to see the course open up pretty quickly and by mile 2 I was moving along at a pretty decent pace.

I was able to pick up the pace once I maneuvered around two pile ups. The course was dry and loose in places, and lines had to be carefully chosen.  Finally, after an early season of wondering if my climbing legs would ever show up to play, today was their day to shine.  Now, this course only had about 900 feet of elevation gain per 10.3 mile loop, but the legs felt great whenever the trail shot up. My fave was the Monster Mile bypass climb, the longest on the course with a couple false flats.  It was here that I was in my element and able to pass quite a few racers.

All total, there were about 4 other short kickers.  These lap format races can get quite mind numbing, so in order to keep it "fun," I made a game out of it.  I would settle on the flats and descents and work on technique and using less brake.  I would "rage" the climbs, going as hard as I could, welcoming the burn.

By the third lap, I had Amy and another woman in my sights.  I slowly began working my way up to them, when at a cross roads in the trail, I saw two emergency vehicles with lights flashing.  Not a good sight.  Within minutes, my forward momentum came to a standstill, as the first responders were working on a downed racer.  We were slowly allowed to pass around the emergency vehicle which had the racer strapped to a back board.  I think I heard the injured rider speak, but could not tell how badly she was hurt.  I silently said a prayer as I passed by.

I finally reeled in Amy and the other woman halfway through the 3rd lap.  I followed them for the remainder of the lap, resting a bit, and figuring out how I wanted to play this out on the remaining 3 laps. Once I approached the Start/Finish area and figured out that the other woman was not in my class, I decided that I would catch back up to Amy and if my legs were willing, I would do what I could to try to open up a gap on the Monster Mile bypass climb.

I made my move when the trail opened up.  I dug deep into my reserves and pushed hard for the remainder of this 4th lap.  Not knowing how big a gap I had opened up, I looked longingly at my Red Bull in the cooler when I swapped bottles, but made the decision to use those precious seconds to devour more trail.

The last two laps went by quickly.  I felt much better the 2nd half of the race and just eeked in a negative split!  I enjoyed talking with Mike Johnson on lap 5, discussing old fart racing and ti bikes. 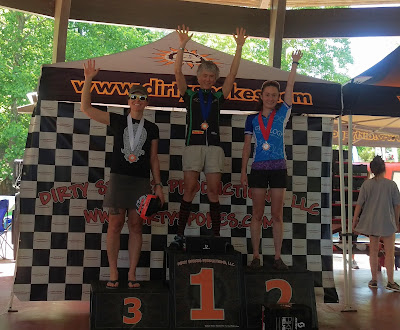 I rolled through the finish with 6 laps, 62 miles, in 5:19:21.  First place earned me a sweet pair of Scott bike shoes, but alas, a size 44, too big for me.  But a perfect fit for Zeke!  Over the years, I have been on the receiving end of his schwag bag goodies and prize winnings.  It was finally time for me to give back.

Posted by Carey Lowery at 11:45 AM
Email ThisBlogThis!Share to TwitterShare to FacebookShare to Pinterest
Labels: Dirty Spokes, racing, single speed