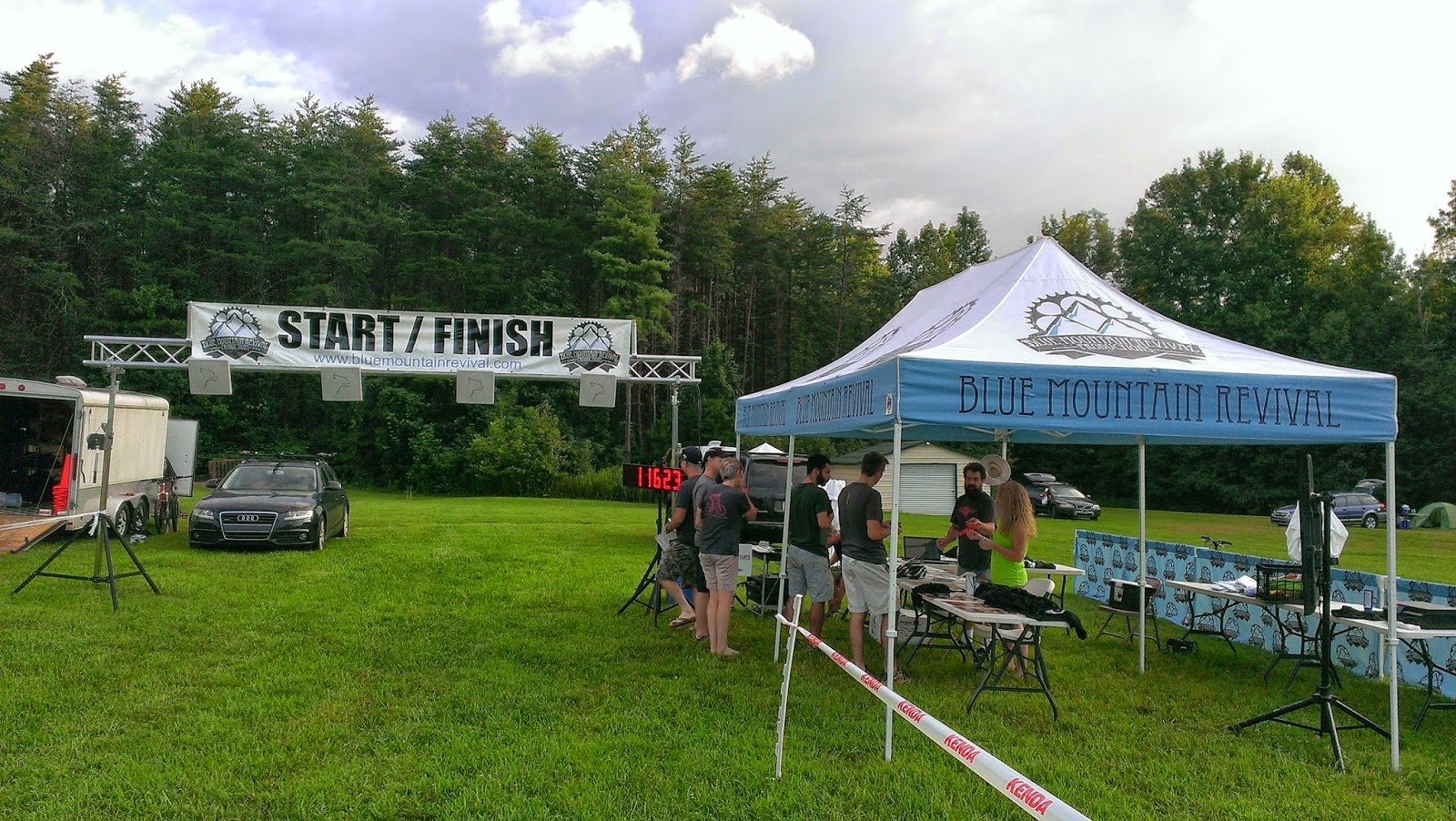 The Savage CX is the first of 3 races in the Blue Ridge Monster Cross series.  These races take place on forest service roads within the Pisgah National Forest.  The distances are 50-70 miles with 7000-11000 feet of elevation gain.  The Savage is aptly named as this was a beast of a race in the wild and rugged wilderness that circumvented the Linville Gorge.

131 racers lined up at 9 am.  The gun went off and I was off on my adventure.  After some mashing through some deep grass in a field and then up a section of single track, which most of us had to walk due to the congestion, I was on gravel.  Although I had heard that this course was a toss up between a mountain bike and a cross bike, I opted for my Cysco CX.  If nothing more, it would help my skilz on the sketchy descents and test my quads on the climbs. 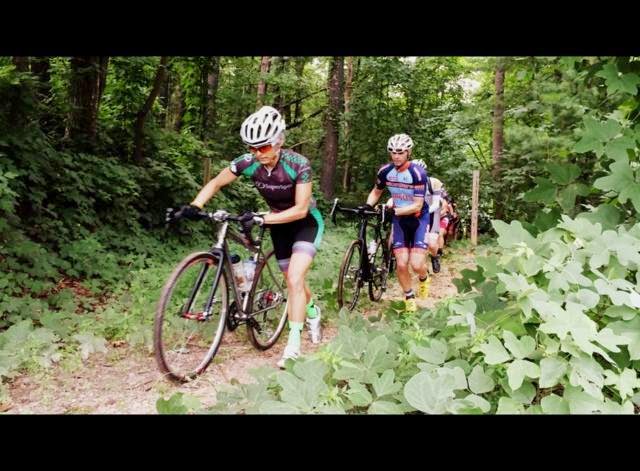 The first climb began at mile 1.5.  Called "The Wall,"  it rose 2000 feet in 7 miles.  And the gravel was loose, especially on the sections that approached 15% grade.  It was about all I could do just to keep the pedals moving forward while trying to maintain traction.  Standing up was not an option; I had to keep the rear wheel weighted.  Fortunately, Mother Nature treated me with a light rain.  Just enough to keep me cool, but not enough to cause the roads to deteriorate.

Knowing who my competition was but not where they were on course, I just kept it pegged on the first half of the course.  This is where all the climbing was and I was hoping that it would be here that I could do the most damage.

One more heinous climb rounded out the 4000 feet of elevation gain within the first 17 miles.  I was pretty happy to see the descent that ended up at the first aid station.  My gluteus maximi were on fire from grinding up NC 105. ( NC 105, you tried to crush me, with your loose gravel, stutter bumps, and the short, slick pave' section at 20%, but you did not succeed.)  The aid stations were manned by the kids from the South Mountain foster community.  I must tell you, they were ON IT!  I was in and out of aid #1 in NASCAR fashion!

The third climb was on pavement at a more mellow grade, giving my legs a much needed reprieve.  And then the sun came out and began to heat things up.  The air was thick and the heat coming off the pavement was intense.  I was thankful that I had added additional electrolytes to my bottles, as I had a steady stream of sweat dripping off my nose.

Once off Hwy 181, there were a series of turns winding through some neighborhoods.  I was in a group of 3 at this point and one of the signs had been moved, misdirecting us onto another gravel road that went straight up.  Thankfully, one of the guys in the group had raced last year and did not recognize this.  After about a tenth of a mile, I stopped and pulled out my cue sheet.  Not seeing this road on the sheet, we turned around, and finally found the confirmatory tape that directed us straight on Valley Drive.  (In hindsight, I should have fixed the sign, but I was in racer mode and would have had to turn around and climbed back up.)

Table Rock Road was a fast and fun fire road that contoured around the mountain.  Mostly down at a gentle grade, I was able to motor.  Still, I had to be wary of several huge stutter bumps in the turns.  It was here that I joined forces with Brian and together we made short work of this section.

At mile 27 was the second aid station, where I grabbed my final bottle.  The next 7-8 miles were technically challenging as the road was unmaintained, rutted, washed out in a few spots, and covered in grass and sticks.  Thankfully, Paul and his crew had been out the week before and mowed it down to where the tread was a little more visible.  It was still a lessson in skill, speed control, and patience on my cross bike.  I was probably a bit more conservative here, as I saw a couple racers with flats.  Brian and another racer got a gap on me here.  I tried to keep them in my sights as I knew it would be beneficial for me to be in a group for the last 10 miles to the finish.

Finally the road became more civilized and I was able to close the gap up to Brian and the other racer.  Together, we motored the last bit of gravel to Hwy 126.  Once we hit the pavement, the other guy took off.  He must of smelled the barn.  The last 6 miles were just as hard as the first 6.  My gas tank was empty.  Thankfully the grade averaged about 3%, although it felt like 10.  That first climb of the day had caught up to me.  Brian and I rode together the remainder of the way, trying to help one another find shelter from the headwind.  Why is there ALWAYS a headwind at the end of a race?

Once back on the Southmountain Children's Home property, I retraced the path down the single track, through the field, and under the Finish arch, with a time of 3:49:12, first woman and 17th overall.  Even though the legs were not quite "sparkly," I'll take that time gratefully. 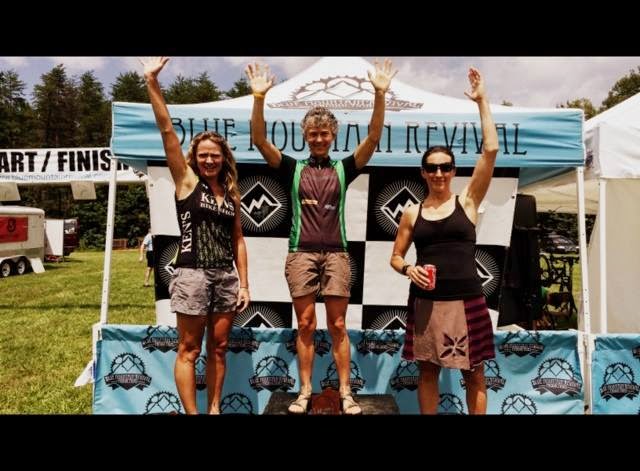 It was definitely a brutal course, but I expected that.  After all, it is Pisgah.  The course was very similar to the HardFord 50, but with the majority of the climbing in the first 1/3.  Cam and crew did a good job, all the way around.


I have got to say that I still have some mixed feelings about bike choice.  Yes, the cross bike was indeed faster on the pavement, and some of the descents.  And at least equal on the climbs.  I'm not sure how much time I would have saved on the unmaintained fire road descent.  Having said that, the Cysco was indeed a joy to ride.  I never felt beat up; the ti frame soaked up the small bumps beautifully.  Where it was smooth, it was fast!  I just need to work on technical descents with skinnies and drop bars. 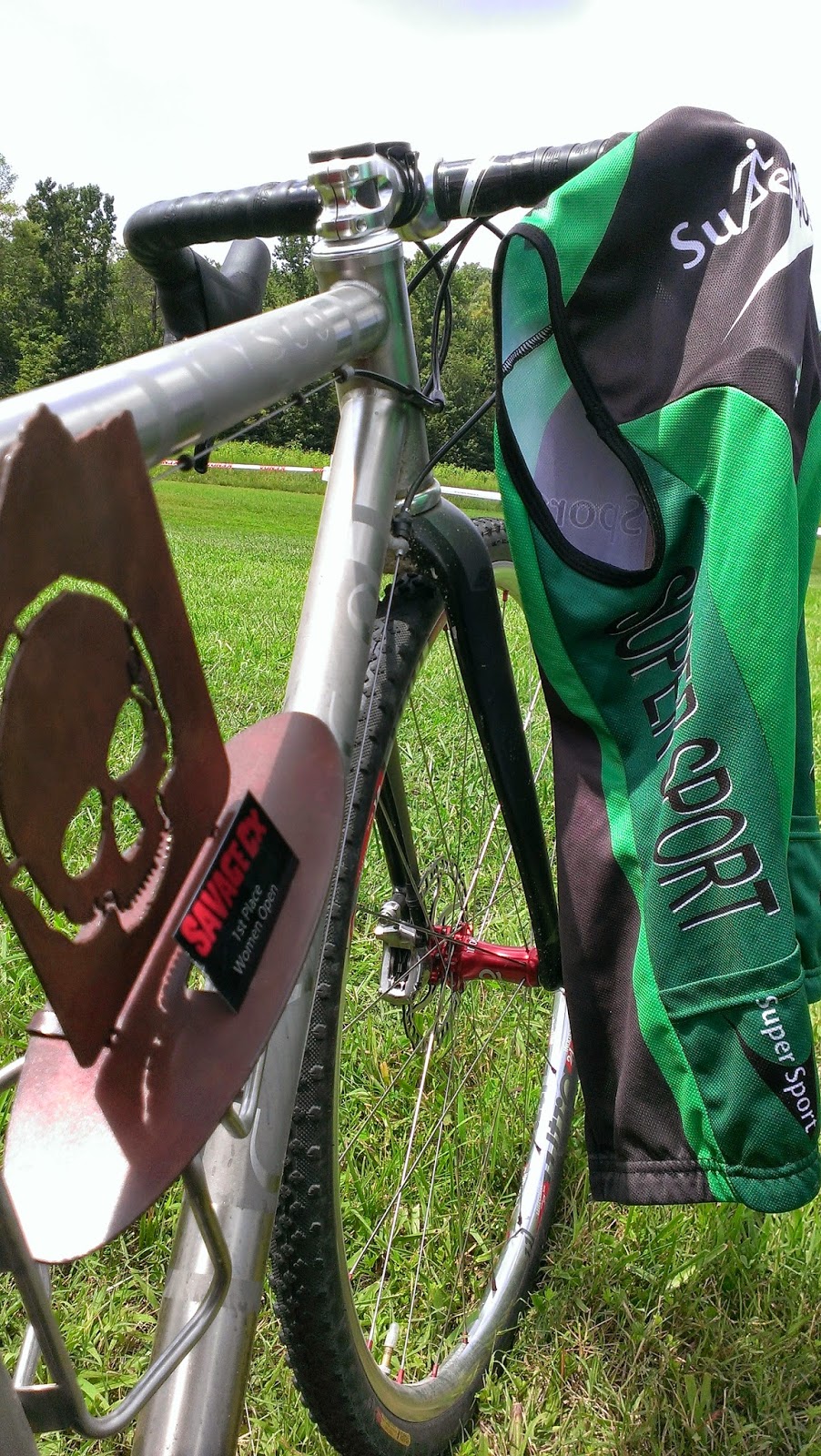 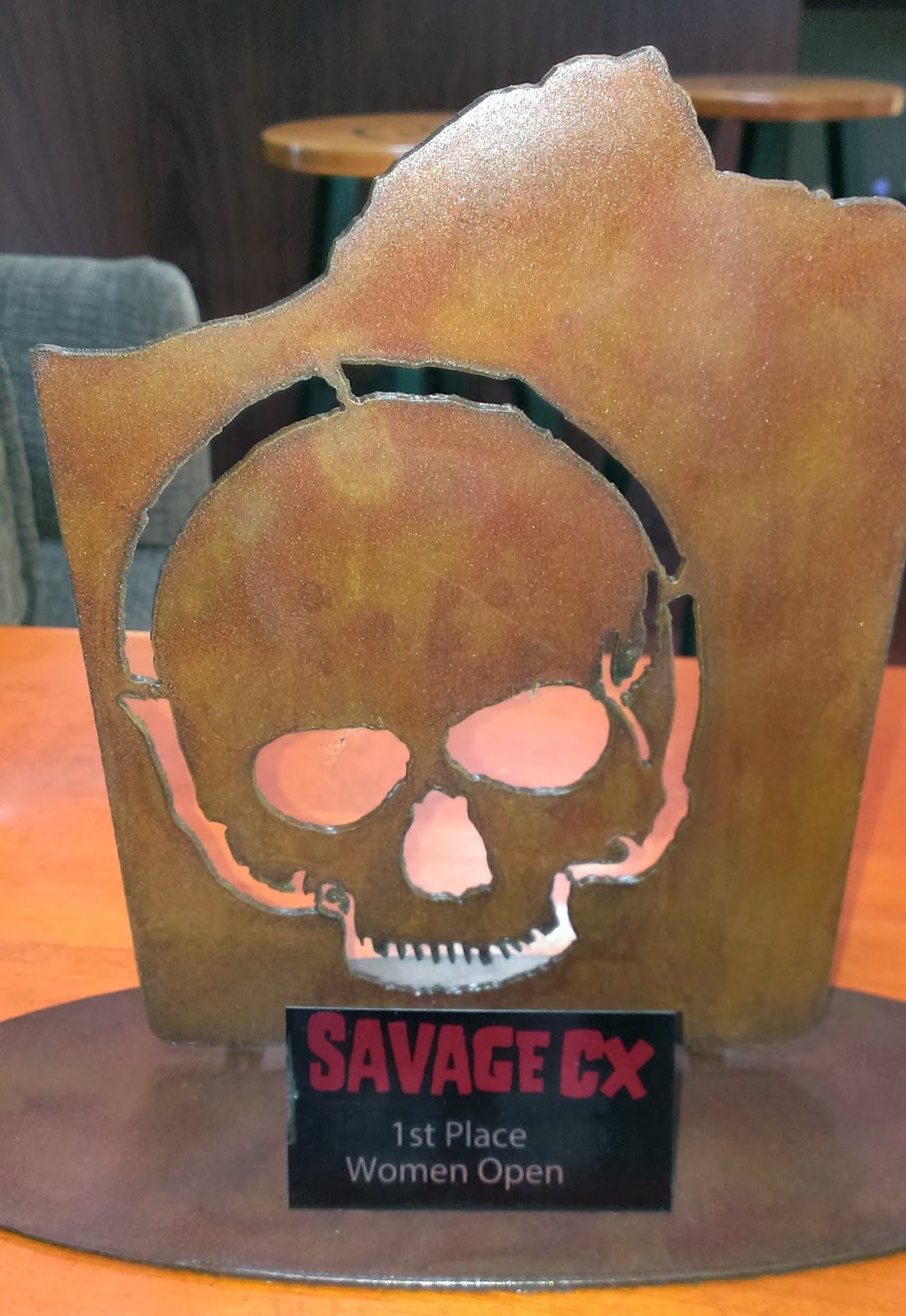 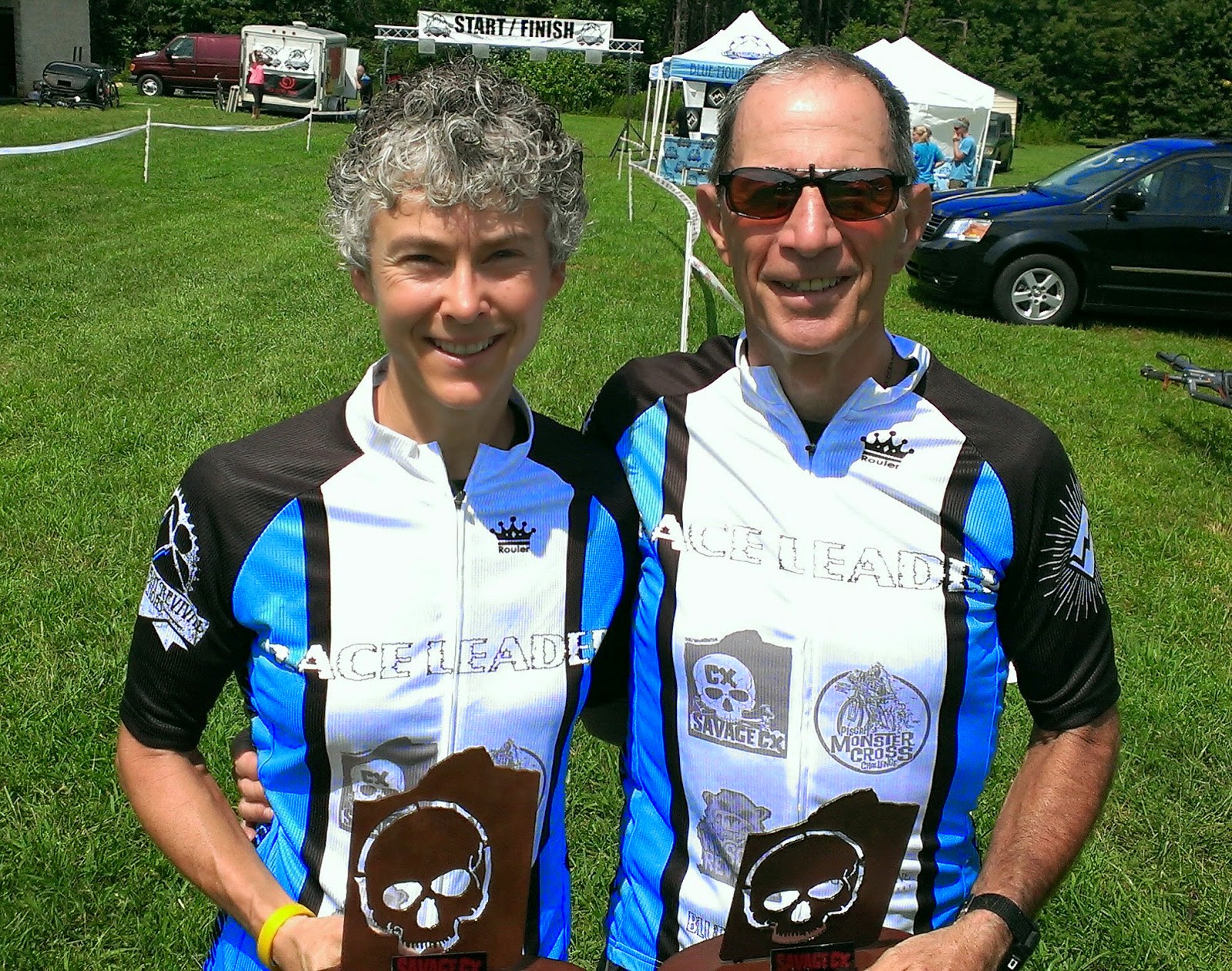 Great job, Carey! Thanks for coming out!