Last weekend, I mosied over to the Payne Creek Trail System on Lake Hartwell along the Georgia/South Carolina border.  A "new to me" trail system, it was 9 miles of well maintained fast, flowy hardpack trail.  I did not do the omnium but rather chose to pre ride on Saturday before the monsoon hit.  This would be my fourth ride/first race aboard the Cysco.


About an hour before the race Saturday morning, I found a partial sidewall tear on my rear tire.  Oh, crap!  I muddled over the possibilities:  ride it, ride my Niner, throw a tube in it.  Five minutes later, I decided to just go for it.  If I flatted, well, then I could practice my flat fixing skilz.

After a good long warm up, I rolled up to the second row.  I just happened to glance down at my front wheel and what did I see?  A flattened "road kill" frog that was stuck on my tread!  I thought about the significance of that for a moment.  The Faster Mustache crew were in force, one dude yelled "Go!", I clipped in on the first pedal stroke (small victory), and the field set a blistering pace up the pavement.  The big gear mashers pulled away and I was in the second group to enter the single track.

I was amazed.  Hero dirt!  Even with the deluge the night before, the trails were perfect.  There was plenty of traction in the corners and I fell into a nice rhythm carving  the turns.  Ursula and Lisa were right on my tail through the Heartbreak Ridge section, but I was able to pull away during the beginning of the main trail.  Last year there was a beer short cut on the second lap:  drink 16 ounces and you did not have to ride the 1/2 mile lollipop.  Not knowing if the short cut was going to be there this year, I kept the pace up to try and buy as much time as possible.  Last year, Lisa chose the beer ... and probably would again, since Chris would be able to make the drive home.  I timed the lollipop:  3:30.  Pretty big penalty!  Go go gadget legs!


Finishing up the first lap, I swapped bottles.  The legs were still happy, so I continued at my pace.  I must have been fatiguing a little, as I banged my rear tire on a couple of roots/stobs and heard that loud popping noise when the tread is temporarily "stuck" on the obstable.  That got my adrenalin to kick in, for sure.  I settled a bit after that.  I came upon the  lollipop loop ... and no beer short cut.  Whew!

I finished the two lap race in 1:34, good enough for first.  Ursula came in second a few minutes later and then Lisa in third.  I do believe she was still carrying some TNGA fatigue as she stated she like the descents better than the climbs.  Monster!

Overall, the Faster Mustache crew put on a good event.  They rallied through the rains to ensure the short track/cross race occurred and worked with Jud and crew on the trails to create a furiously fast trail for the xc event.  My only complaint would be the prizing and that would have to be on Maxxis.  A 26" tire/tube for first.  Really?  Second place was the place to earn, for they got an Endless Cog!  Having said that, the trophies for the omnium were pretty cool and unique.  I do believe Zach created those works of art:  sort of a cross between a chia pet and a lamp.  (Sorry for no pics!)

As far as my steed, she is most amazing!  I love the feel of titanium.  And the custom cockpit has me becoming one with the bike.  I leave it at that, for now.  She is due a post all her own ... soon. 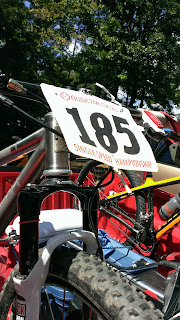 Go-go Carey. You are tearing up this season.