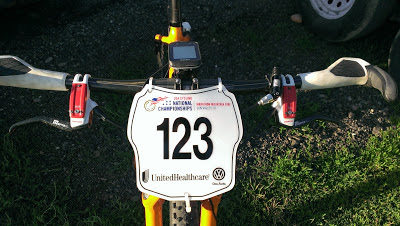 As I lay in bed the night before the race, I began to second guess what I had done in the week leading up to this one.  20 hours of riding is not how one should prep for a National Championship.  My legs were heavy, my head was aching, and my stomach churned with butterflies.  This was not what I had come to Idaho for.  Back in the spring when I began to plan this trip, the only thing on the agenda was to "just ride."  It was not until mid-May that my friend asked, "Do you know what is taking place the week you are going to be in Ketchum?"  I had no clue that the Marathon Natz was gonna be there.  "Oh, hell!" was my reply.  Now I had to race!  I did this before back in 2009:  24 hours of riding in the Colorado mountains topped off with the Marathon Natz in Breckenridge.  I placed a respectable 4th in my age category then.  Back then it was gears; this time it was only gonna be one.

There were 6 ladies in the single speed division.  Andrea and I were the only lowlanders.  Three were unknowns, but all were strong (after some quick Google searches).  I opted to use a Camelbak for the first lap even though I hated the extra weight on my back when I was standing and grinding.  The air was dry and I needed to be sure I drank adequately.

The gun went off and before we set off on the 2 mile bike path stretch over to the Coldsprings climb, we had to do this silly little parade loop around the base of the ski slope.  After a brief section of flat single track, the course immediately went straight up the mountain on a snow cat track.  I was dead last as my legs barked immediately from the get go.  I so wanted to get off and walk up that bit, but everyone else was grinding up.  And so I did as well.  Eventually we all had to get off and walk a steep section up to the River Run single track.  From there it was a series of switchbacks back down to the lodge and then we were off on to the bike path.

Spin spin spin ... coast coast coast ... and repeat.  I was able to reel in 1 lady and pass her.  Now I was in 5th.  And then the 9 mile climb began!  The first 4 miles was gravel road and double track.  The high cadence low torque bike path section allowed my legs to wake up without blowing up.  Whe I hit the climb, the legs were there!  I marked 4th place and slowly began to reel her in.  There are two short kickers in the first 4 miles.  I caught up to 4th on the first one.  It seemed that she was running a bigger gear than I as she struggled up the climb and eventually dismounted.  Wanting to save my legs, I wisely got off and pushed as well.  I passed her before the second kicker.  Now I was in 4th.

I saw Andrea next.  She was not too far ahead and I caught up to her as we entered the single track.  She too, was pushing a bigger gear.  I was content to follow as my heart rate was about 7 beats higher than where I wanted it to be.  I needed to settle.  We soon got caught up in traffic.  Andrea called out very politely, "single speeders needing on by" so many times that she should have had a recording.  I knew that talking expended energy so I was happy that she was in front (I ain't no FOOL).  With about 2 miles left on the Cold Springs Trail, I saw a bit of weakness and decided it was time to go.  Now I was in 3rd.

I passed quite a number of racers on this climb.  For the most part, everyone was polite and would yield some trail so that I could motor on through.  The group that I had the most difficulty with were the 50+ men. There were a couple that just did not want to be passed, especially by a woman.  Did they not know they were racing for 2nd to last place?  I finally managed to skirt around them, but it took every ounce of energy and focus to not rub handle bars or fall off the mountain.   I suppose getting passed by a woman on a single speed can be kind of an ego killer.


Finally after a little over an hour of continual climbing I was at the top.  Now came the beginning of the 13 mile descent (with a couple of hiccups in).  When I had pre ridden a few days before, the descent was, for the most part, smooth and flowy.  There were a few rocky areas where you had to be light on the bike for fear of slashing a side wall, but otherwise very fast!  Today was a different story ... it was a wash board!  Apparently people were a little heavy handed on the brakes and the trail turned into a wash board.  The racers on this side of the mountain were very polite and I was able to get around without losing much time.

The two hiccups I mentioned were 5-7 minute climbs, one on single track and one on double track.  I saw Zeke at the 2nd aid station on the 2nd hiccup climb.  He told me that Rebecca was 10+ minutes ahead and 2nd place was about 5 minutes ahead.  At this point I did not think much about that other than riding my own race.

Hershey Highway was a ballsy doubletrack loose gravely descent down to the River Run single track.  It was all about leaning the bike far enough to carve the turns but not too far and eating it in the loose rock.  Max speed for me on this section was a screaming 35 mph.

The River Run Single track was a series of 15-20 switchbacks back down to the lodge.  Sharp rock reared their ugly heads, especially in the corners.  This is where Rebecca flatted last year during XC Natz and lost the race.  This thought I kept in the back of my head as I negotiated this descent.  The switch backs were tight and loose.  Basically you stuck your front wheel in the rut, squeezed your rear brake, and slid your rear wheel around.  After 10 times I was ready to be down to the bottom.

Just before you hit the bottom, there are two options to take.  The "A" line is a 30 yard rocky face at 30-40% grade.  If you screw this up, you will get hurt.  If you clean it, you will be 30 seconds faster.  The "B" line is one more switchback descent.


During the pre ride, my head was not in it and I did not do the "A" line.  Today, my focus was razor sharp, I turned my brain off, and let my body take control.  Cleaned the "A" line and gave myself a mental boost for the second lap.

When I entered the feed zone, my cooler was not where I left it.  Volunteers came from every direction!  One held my bike, the others found my blue and white cooler in a sea of blue and white coolers.  One lady even popped the top on my Red Bull.  She excitedly cried out,  " I've been wanting to do something all day!"  Those people amazingly got me out of there in record time.  I ditched my CamelBak and went with a water bottle as I knew at the first aid station at the top of the climb there would be a water bottle feed.

The climb up Cold Springs the second time was brutal.  There was less traffic and those who were in front of me seemed happy to stop and let me by.  I had to will the legs to turn the pedals over on the steeper sections.  Fortunately, I think the patience pill I took before the race saved enough energy in my legs on the first lap to allow me to grind up the mountain the second time.  (When I looked at the results I was only 2 minutes slower the second time up.)

After the first hiccup climb, I began to descend down to the Warm Springs Traverse Trail.  I heard the dreaded "pssssssss."  Oh, no!  I cannot be getting a flat!  I kept descending hoping the Stan's would work.  After about 45 seconds the hissing stopped.  I stopped to see how my rear tire felt.  Funny,  it was still firm.  If I did not puncture, what was that noise?  I continued to descend.  Two minutes later, I heard this buzzing noise and then, "Bam!"  I got stung near my left shoulder.  There was a dang bee in my jersey.  That was what had been making that noise.  I got stung 2 more times before I could stop, unzip, and get that bastard out.  There were people coming up on me, so I did not have time to zip my jersey back up.

When I began the second hiccup climb, I passed a racer who told me that second place was just up the road.  Holy crap!  I thanked him for the info and embraced the pain cave!  I motored like there was no tomorrow, clawing my way up that climb, looking around every corner to try to catch a glimpse.  Right before I reached the top, I saw her!

With about 4-5 miles to go, all of it descending, did I have the skills to catch her?  I did not know, but I was going to find out in the next 15 minutes.  I screamed down Hershey highway.  Every time I caught a glimpse of her, she was growing.  I was closing!   When she reached the River Run single track, I was about 30 seconds behind her.  2 1/2 miles to go!  With each switchback turn, I was reeling her in.  But how would I pass her on this tight single track without taking us both out?  It looked like it was going to come down to the rock wall.  Would she take the "A" line?  If she did, game over.  But as she approached, she turned right onto the "B" line!

I turned left, flew down the rock wall like it was child's play and rolled through the finish, 30 seconds ahead of her.  I just took second in the Marathon Nationals Single Speed division!  I was so stoked!

I felt a little embarassed coming through the finish with an unzipped jersey, but stopping to zip it up would have cost me 2nd place.

I came into this race expecting no more than a good time and a safe finish.  What a way to finish off an epic week of riding in the Sawtooth mountains of Idaho!


I want to thank The Outdoor Store for a perfectly working machine, Endless Bikes for that wonderfully big 22 cog, Pro Gold for a happy drive train, and Chamois Butt'r for a happy toosh.  And a big shout out to my Coach, Lynda Wallenfels, for prepping the engine!

Great write-up, and congrats on what sounds like a tough race!