Carly and I arrived early on Saturday.  We pre-rode Carly's course, a 1/2 mile single track loop, which was pretty intimidating.  We got off our bikes on a long rooty section and together decided the best line through it.  After practicing it a few times, Carly had the line down pat.  After that was a 100 yard loose and somewhat rooty climb followed by a fairly steep descent with one "hole" to go down and back up out of.  The first time it came upon Carly so quick that she did not have time to get scared.  This deep ditch was about 4 feet deep and 10 feet wide.  Momentum was definitely your friend; if you hit the brakes you would not make it to the top and would most likely fall back down to the bottom.  The lap finished with a steep climb back up to the Start/Finish.

After her pre-ride, we registered and got our schwag bag.  Carly loves this part.  She pulled out a Jet Blackberry Gu and devoured it.  Next she pulled out this: 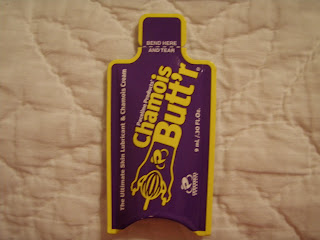 And then she asked me, "What does this taste like, Momma?"  I about fell backwards I was laughing so hard!  Once I told her what it was for, she got this disgusting "I can't believe I was about to eat that!" look on her face.

Once Grandmom Sandy and Grand-Doug arrived,  I went off on my pre-ride while Carly took the grandparents on a hike of her course.  My Mom later told me that she had asked Carly if she wanted to race with a bottle of water or sports drink.  Carly's response (with the most serious face, according to Mom),  "No, Grandmom, that adds WEIGHT."

Sunday morning, Carly's race went off bright and early at 8:30 am. The day before she had showed us our positions out on the course:  Grandmom at the root garden, Grand-Doug at "the hole," and I at the road crossing.


Carly's race was 2 laps.  Once the gun went off and she was out of sight, I went to my position.  Whereas on the pre-ride she was "on the brakes" on the descent, today she was flying today!


On the second lap she had lost a position.  She later told me that the girl (in the picture above) had passed her on the climb, causing her to bobble.  But she said she ran the bike up to the next level spot and hopped right back on.


When asked what the favorite part of the race for her, she replied with a big smile, "The downhill!"  Awesome.  At the previous two races the answer to the question had been, "the finish."

Other than the competitor-induced bobble, she executed a great race.  Doug said that she made "the hole" look easy.  He helped a lot of kids up and outta there by grabbing on to their handlebars as they just barely crested the summit.

Now, if I can only figure out how to make L4 and VO2 max intervals fun for her!
Posted by Carey Lowery at 9:11 AM
Email ThisBlogThis!Share to TwitterShare to FacebookShare to Pinterest
Labels: Carly, Chamois Butt'r, SERC

Good race Carly! You're getting a great early start and have many more races to look forward to.

haha, I have been tempted to make the kid do intervals, better wait on that though!