I have been doing this race for 4 years, starting in 2006 (missed 2007).  Zeke and I have driven past this sign multiple times yet this was the first time we noticed the Possums Unlimited.  Really?  You have got to be kidding! 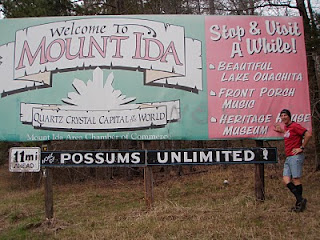 We arrived Thursday which gave me a chance to pre-ride Brushy and Blowout Mountain and make small animal sacrifices to the rain gods.  Zeke opted to do the Tour since we had to drive back Sunday in order for me to go to work on Monday.  It also allowed him to hand off nutrition at the midway sag of the race.  There was stiff competition this year, so I knew every minute would count.

Sunday morning I awoke to a clear radar and 50 degree temps.  Hot coffee, eggs, and pop tarts went down one hatch and Saturday's meal quickly came out the other!  I arrived at Oden school still deciding what to wear.  Last year I was frozen at the end of the race and I did not want a repeat.  While Zeke was putting my number plate on Indy, I got my gear and nutrition together.  In the end, I went with a base layer, jersey, arm warmers, and shorts.  Rapidade and Hammer Gel were the octane for the day.

The neutral start to the gravel allowed me a gradual warm up which I was thankful for.  At 41, my legs don't like to go full throttle in less than 10 seconds.  Once I hit the gravel road which slowly climbed up to Brushy, I managed to stay with the leaders without redlining it.  With about 2-3 miles to go to the single track, I along with a few others got shelled out the back.  I kept expecting Sonya or Andrea to go flying by me as I did not feel I was pushing it all that hard.

I entered the single track in a good position.  Here I slowed up just a bit until I found my single track legs.  Then I slowly began to work my way around a few guys.  Everybody was very nice today.  Those who were slower allowed the faster ones around without any bickering, me included.

Coming off Brushy, my legs were feeling great.  I did not have my PowerTap wheel, but by PE and HR, it seemed that I was keeping the power in upper L3.  I was so happy that the organizers decided to let us head up Blowout.  One of my favorite sections and riding it this way is much easier compared to last year.  The best comment of the day was when I was climbing the steep babyhead rock section just after the dirt road crossing.  As I passed this guy who recognized me as a woman, he cried out, "Holy sh!t!  You go girl!"  Finally some respect instead of him trying to ramp it up and stay in front of me.

Blowout has a lot of rock gardens.  I was wise enough to know when to get off and run 'em.  I saw several guys attempt to ride the harder ones.  Boy!  They went down hard.  Luckily only injured pride.  I rode the first 3 and ran the last 3.  The descent was rippin' fast, my bike ('09 Specialized Era)handled beautifully, the tires (Specialized Captain's) hooked up well, and I popped out onto the gravel road before I knew it.

A mile of gravel road led me to Chalybeate (Clee-bit).  As I went through the water crossing, I looked for my little toad friends I saw the day before.  (Funny story, thanks to Zeke.)  Yesterday, Zeke told me he saw a toad with a gumball, West Virginian for hackberry seed pod, in its mouth.  When I stopped for a closer look, I saw the toad but the gumball was not a gumball, but a female toad underneath the toad.  I do believe they were "twitterpated."

...Back to racing.  The initial climb was a good steep little grunt to the top.  I settled down and rode it smart, passing a couple guys as they bobbled on some rooty sections.  Once to the top, I slowed my pace down just a wee bit as I felt I was still going a bit too hard.  I was feeling great, but did not want to pay for it later on the Womble.  Most people have the notion that the Womble is all fast and flowy, the easy part of the race, but I knew better.

About halfway through Chalybeate, I caught up to Todd and another guy.  I hung on to them like glue as I did not want to be alone on the 8 mile road/gravel section leading to The Womble.  Todd was still recovering from a respiratory infection.  Unfortunate for him, but fortunate for me.  His sickly pace was my tempo pace.  Once we were onto the road, several more guys caught up to us, paced with us for a short piece, and then one guy shot off the front with all of us desperate to hang on.  I soon realized this would blow me up, so I popped off, followed by a few others.  We watched them disappear off the front, but would soon catch back up to them and pass them on the Womble.

Zeke was waiting at the Highway 88 aid station.  I swapped hydration packs and gel flasks.  I then asked Zeke for my blueberry newtons.  He forgot to lay them out.  While he went back to the truck and searched for them I was wanting to go, go, go!  I was fearful Sonya and Andrea were hot on my wheels and precious time was being lost.  At least that's what it felt like.  In actuality, it was probably only a few seconds.  Sorry, Zeke, but my game face was on!  I promise I will be good at The Burn!

There were a few kickers on the Womble.  The climb up to bluffs overlooking the Lake, the climb up Reed Mountain, and the last climb up Mauldin Mountain.  Granny was my friend for these.  The funnest part was the narrow benchcut section towards the beginning of the Womble.  You could go fast but you had to be careful.  If that front wheel washed out, you would take quite a tumble down.

At some point along another short gravel road section, Zeke told me that I was only 4 minutes up on Sonya.  At this point there were still about 20 miles left.  My mindset quickly turned from "Happy, happy, joy, joy" to "Oh, sh!t!"  I turned on the gas at this point or so at least I thought.  After about 10 minutes of trying to rev it up, I realized I was going no faster than prior to Zeke giving me a time check.  So I went back to my "Happy, happy, joy, joy" feeling.  After climbing Mauldin, I was really able to rail the ridgeline section and had fun doing it.

Once I hit the last section of road back to the finish, the fatigue set in.  The headwind did not help matters either.  I was able to draft off Todd for a bit before I popped off him.  I put my head down and just pretended I was doing a 20 m inute TT.  Once I turned left and headed back up to the school, I looked back and saw no one.  It was here that I eased up and crossed the finish line in 5:39.

I had a perfect race today.  I was strong, Indy performed well, I fueled well, I never got cold, and I was never isolated on the road sections.  I ran the Ergon GX3's (had been running GR2's) and even with a little less padding, they felt great all day.

The OC has only been my second race this season since coming out of hibernation.  I am very happy with how my training has been going and hope to be able to continue to improve. 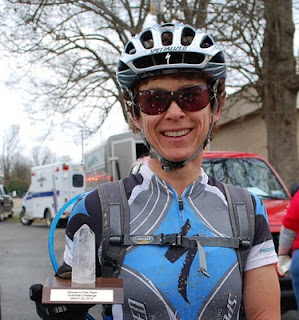 Congrats Carey!! I was planning to say hey before the start but there were so many folks...I couldn't spot ya! I think you might have been the blur I saw off the front! ;-) Congrats again!!

Congrats again! I can't wait to see how much money I'm going to owe you after Burn :-)

Nice racing! I paced a little too conservatively and wasn't anywhere near you and Sonya... can't wait for Syllamo!