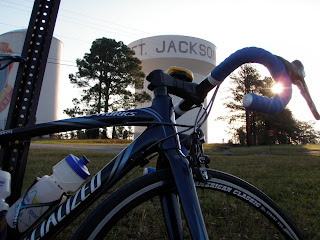 This weekend has been spent at Mom's in Columbia, SC. Having training rides to do has necessitated early awakenings and out the door before daybreak. Today, on the advice of Emily, I headed out to pedal the pavement on Fort Jackson.
Wow! What a ride and not from the training aspect, but from the perspective of one who spent 12 weeks here back in the summer of 1988. As soon as I entered the gates I ran across a unit of poor trainees in full combat gear enduring a road march. Boy, I remember those days and was so happy to be on my bike pedaling by and not pounding the pavement with them.
Further on down the road, I had to stop as another unit in PT (physical training) clothing were crossing the street, heading back towards their barracks after another 5 am workout of running, push ups, sit ups, pull ups, more push ups, side-straddle hops, and more push ups.
Don't get me wrong; I am glad that I enlisted and was able to serve my country. I am also very proud of those troops that I came across today. I just cannot imagine going through all that suffering again. Suffering on a bike is "easy peasy" compared to 12 weeks of boot camp and here is why:

Today was a wonderful day on the road wearing a cycling kit and NOT combat fatigues. Emily was indeed correct. The roads were free of traffic and I was at peace reliving my younger years.

Posted by Carey Lowery at 2:36 PM
Email ThisBlogThis!Share to TwitterShare to FacebookShare to Pinterest

Glad the ride info worked out! The Fort is a really unique place to ride, always something interesting going on. Glad no one makes ME do pushups while I am there, though!