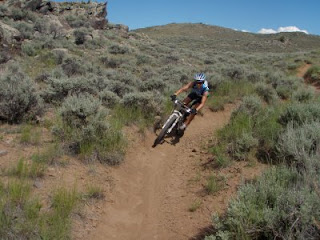 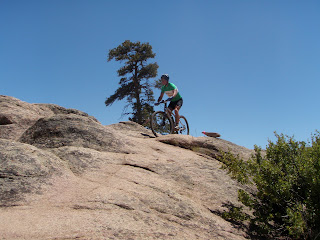 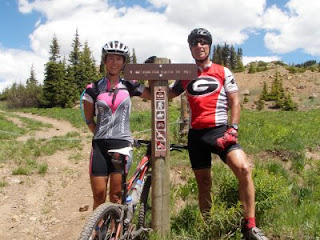 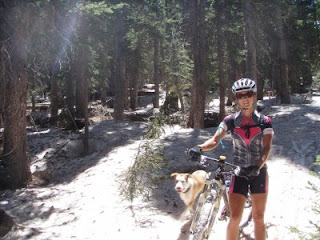 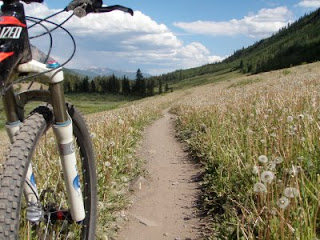 Tuesday morning saw us leaving our gracious Salida hosts, Kent and MaryAnn. We were off to Gunnison, to explore Hartmann Rocks. I only knew that there were rocks and swoopy, banked turns.
When we arrived, it was like different planet. Out of the high desert plains, jutted up mounds of huge rocks. It looked like a giant had molded it out of brown play-doh. I immediately identified the supersteep dirt road climb up to the playground. Fortunately, it was dry, Namrita, as was the rest of the system. With bluebird skies and temps in the 70's, I knew it was going to be a good day.
The first techy rock trail threw me off a bit, as I just was not used to the granular surface and granite rocks. Not sure of the trail's name, this was one where you did not want to make a mistake or ride off the trail because you would likely fall to your death several hundred feet down.
However, after warming up and hitting a few more, I found my flow and thoroughly enjoyed the supersteep rocky descents and bouldery ascents. The Luge Trail, so aptly named, was a rollercoaster of fun. With its banked turns and smooth surface, I was able to rail it! The Rattlesnake tested my skills and left me exhilarated.
After 5 hours of fun and our bodies slowly turning brown in the Colorado sun, we packed up and headed to Crested Butte. This town is very quaint nestled in a valley surrounded by 14'rs. Zeke took us up along the Slate River to a campground which would be our base for the next couple nights.
Wednesday morning we awoke to cooler temps and tired bodies. Zeke was nursing some severe purple sage allergies and I was trying to move the lactic acid out of my legs which had 20 hours of riding under them. We headed to town and refueled at The Paradise Cafe. With bellies satiated, we went back to the campsite and from there began to tackle the dirt roads and trails.
After about an hour climb up the Slate River Road, FSR #734, and FSR #811, we topped out at 12,000ft to begin Trail #403. Most of the trail was rideable, but there was one 3/4 mile section of snow we had to hike through. And then the descent down to Gothic campground was pretty treachorous. Supersteep, with loose rocks, and several drop-offs, I took one spill. After that, I played it smart and walked a couple sections. Once again, no room for error! One mistake would send you head over heels down the slope for several hundred feet.
More fireroads took us to Snodgrass, Lower Loop, Upper Loop, and Woods Walk Trails. #401 was still heavily snowed in, so perhaps next time ... After 6 hours of bliss, it was time to call it a day. My heart longed for more, but my legs reminded me of a little race on Saturday! I could spend a week in Crested Butte and still not ride all the trails they have to offer.
Off to Breckenridge ...

Posted by Carey Lowery at 9:31 AM
Email ThisBlogThis!Share to TwitterShare to FacebookShare to Pinterest

so glad you got to ride in Gunnison. I can't wait to go back for the Growler next year!! You should come, too.