I raced the first two editions of PSR and it took me 8 years to recover.  Why, you ask?  It might have had something to do with 45 mile days, 9000 feet elevation gain per day, freezing temps, multiple waist deep creek crossings, snow on Laurel/Pilot, Farlow Gap iced over, uphill both ways, etc.  2009 was insanely hard!  2010 was warmer, but still had a short prologue followed by long days.  Back then I was racing against the big guns:  Sue Haywood, Cheryl Sorenson, Amanda Carey, and Brenda Simril.

This time, I was racing in the Masters 40+.  I figured, at 49 years, I earned my way into this category.  I almost didn't get to race, as 2 1/2 weeks prior, I herniated my L5 disc.  But with some chiropractic work, and Dr. Stuart McGill's book, I was well enough to give it a determined go at it.

The first stage had us racing back down the gravel into Cove Creek campground.  Towards the end there is a fairly deep but rideable creek crossing.  So one can hit the crossing rubbing elbows with other racers, or play the waiting game and walk across a narrow bridge.  With everyone in stoopid crazy mode to get to Daniel Ridge which was the enduro section, I opted to take the time penalty and walk the bridge.  I did not come all this way to be taken out in the first 2 minutes of the race.

Hitting FS 475 and climbing up to the turn off to Daniel Ridge, guys and gals came by me so fast, I almost went into a tail spin.  My legs were HEAVY, but had only myself to blame for less than an ideal warm up.  The gravel single track climb on Daniel hurt like the dickens. I was happy to see the HAB (hike-a-bike) train when Pisgah greeted us with the first technical climb of the day.  Conditions were a bit slick as the rain the day before made the roots glisten and the rocks shine.

I took my time along Daniel Ridge, including the enduro section, as I waited on legs and body to re familiarize themselves with the Pisgah gnar.  As I popped back out onto FS 475, heading up to Butter Gap, I felt like I was at the back of the pack.  I was o.k. with that because I survived the first single track without any back pain.

Climbing up to Butter, I was greeted by the Hoffmeisters, James and Beth.  I have gotten to know these amazing people in the last year or so.  They were screaming at me, "You are our favorite racer!"  Awwww ... I blushed.  But as I went by and another racer approached them, they said the very same thing.  Hmmmm ...  come to find out, every racer was their fave!  They had me laughing all the way down Butter.  After the initial chunk and drops at the top, I found my groove and cleaned it all.  I had to make my way around several hike a downers and soon found myself behind Gordon and Emily.

This was the first time I had ridden with these guys and let me tell you.  Emily had the bad-assery moves going on!  That lady has come a long way in a short time.  Her skills were poppin'!  I was most impressed and thoroughly enjoyed hanging out with them on Butter, LongBranch, and then descending FS475 to Davidson River.

I popped off their wheel as the climb up FS475B to Cove Creek began.  Emily had a G-bike on the climbs.  Occasionally Gordon would put his hand on Emily's low back and whoosh!  Up the road they would go, at a pace I don't even think I could match on a good day.  It was amazing to see the power output that Gordon produced.  Very cool!

Towards the latter half of the climb on FS475B, my legs finally came around.  I was able to get in a rhythm of standing and hammering, followed by periods of rest on the false flats.  Soon I was groovin' on the FS225 double track descent to Cove Creek.

The Cove Creek Trail had some major work done on it since the last time I had ridden it back in 2014.  Most of the spindly log bridges had been replaced by rideable wooden plank ones.  Now you could really send it!  I was having too much fun and almost face planted on one steep rooty drop.  How I managed to save it I do not know.  Thank God for a healthy set of reflexes!

I did miss the smell of hamburgers on the final drop in to the campground (from the Swank days).  But there were recovery drinks and plenty of food (chips, scones, bananas, and oranges) to eat at the finish.

I rolled over to the results table where one could not only see your results on a screen, but also print them off, too. 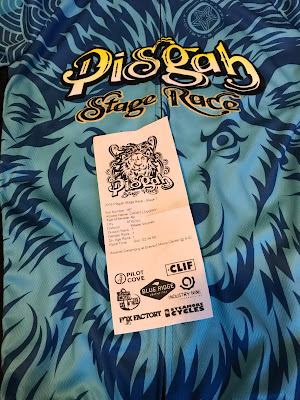 After a not so strong start, I was just hoping to make any podium appearance.  I was pleasantly surprised that I had finished first in my class and had a respectable overall performance, too.

After a brief stretch, I went and had a 15 minute massage. OMG!  If you are going to sign up for the race, you need to sign up for the post stage massages as well.  They are a leg and body saver!  It is well worth the extra $$.  I melted into the table!

With short stages, there is plenty of time left in the day to recover.  I went back to the house, showered, stretched some more, sat in my Elevated Legs, and then headed over to the Brevard Music Center for the evening meal and video/photo recap of the day.


The food was provided by Black Eyed Susan's Caterers and it rivals Mulberry Gap at quality and taste.  They even provided gluten free and vegan alternatives.  And as much as you wanted to eat!  Oskar Blues Brewing provided 1 beer per person per day.  Not being a drinker, I saved mine for Charlie (future kitchen passes!).


Having 15 minutes on second place, I was focused on playing it smart and safe on Stage 2.