In the week leading up to the event, I kept checking the registrant list, as I was the lonely single speeder.  Finally, with only hours to spare, Rebecca Bubp chose to join me in the USA Cycling shenanigans.  There would be only two of us, but that did not lessen the challenge.  My race extends beyond the borders of class or age:  all women and dudes with one gear are fair game!

With Augusta not having any rain in awhile, the course was going to be dry and fast!  However, Mother Nature would do her best to challenge me.  The starting temperature this year was just shy of last year's finishing temperature:  81 degrees.  Waiting on my call up at the start line, the air was hot and heavy, like a warm, wet blanket. 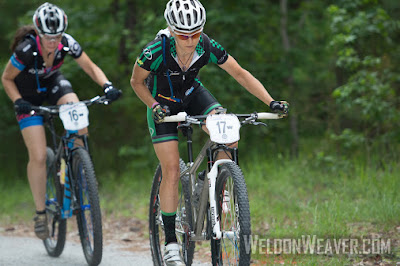 At the gun, I went out hard.  The 19-29 and 30-34 groups had started 2 minutes ahead and I was hungry!  I also wanted to open a gap between Rebecca and I early on, knowing that "out of sight, out of mind," would be to my advantage.  The first few miles of the Bartram Trail came and went quickly.  By the time I had hit the double track flats, I began to reel in several of the women that had started in front of me.  I came upon Melissa during one particular flat stretch and welcomed the draft. I also had the opportunity to say some words of encouragement to her, hoping that those ahead of her in her class would battle it out with each other, fall apart, and be swallowed up by her in the latter miles.  I passed a couple more as they spun in their grannies up those steep climbs, while I mustered every bit of my 111 pounds to keep the pedals turned over.

Across the highway through the pastures, creek crossings, and powerline climbs, I felt the sun's blazing heat. I was like that poor little ant being under the magnifying glass of some 5 year old boy, on the verge of combustion. On one particular long grassy double track descent, I suddenly knew what it felt like to run a series of moguls.  It took all my cat-like reflexes to keep the rubber side down, the ruts being camoflaged by 3-4 inches of grass.

After the final grunty climb back up to the road crossing, I was getting light-headed. I made myself slow down for the 16 miles of Bartram back to the start/finish to keep the engine from overheating. Even though I settled into a slightly slower, but sustainable pace, the flow of the Bartram is amazing. I felt like I was in a Star Wars movie, riding a speeder bike.

About 18 miles and 1 1/2 hours into the race, I sucked on my hydration hose leading to my 50 ounce bladder.  Nothing.  I grabbed my CamelBak, jimmied it around, and sucked.  Still nothing! Fortunately I had a 1/2 full bottle of water on the bike.  Although I had not planned on stopping at the first aid station (mile 20), I was thankful to take a short respite.  Being the only one there at the time, I was treated like a Queen.  I did not even have to get off the bike.  While one volunteer refilled my bottle, another poured ice cold water down my back. 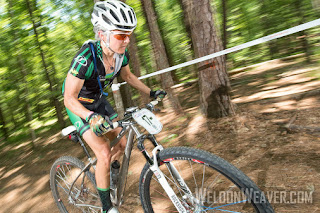 During the remaining 10 miles of Bartram, I caught a couple more women, and started passing some of the younger age group men.  I was pleasantly surprised by how respectful all the men were in letting me by.  As I approached the start/finish, my time was just 3 minutes slower than last year's. The first half of the course was exactly the same, so that was promising.  I stopped and swapped CamelBaks while professional pit crewman Zeke poured ice water down my jersey.

The first portion of the next 30 miles was the Keg Creek Trail.  Due to a road bridge being under construction, this portion of the race was different than last year's.  I would be riding most of Keg first and clockwise.  This part and all of its seemingly 1,532 roots would be the death of me!  Even though the trail was shaded the canopy held in the heat which approached a high of 95 degrees.  The balls of my feet and my left big toe hurt and it felt like someone was stabbing me in the lower back. What kept me hammering, though, was knowing that I did not want to be caught by Mary, who I had seen coming down into the start/finish as I was leaving.  Mary had spanked me pretty good in the Big Frog 65 and I did not want a repeat.  So I motored on, ignoring the pain, and constantly scanning the horizon for signs of the bridge work, as that would tell me I was about to  leave Hell.

After Keg was a 2 mile stretch of pavement.  It was a nice break from the teeth rattling I had just experienced.  And uphill so I wasn't spinning my legs off.  Once again, I drained my 50 ounce CamelBak in a little over an hour.  As I hit the 1 mile Purgatory Pasture, I began to feel a little better. All the pains disappeared so that I could focus on the task that lay ahead.  At the third aid station halfway through the field,  Zeke was there with nutrition in hand.  While I drank my Red Bull, he refilled my CamelBak.  I also managed to pack enough ice into my bra and down my bibs to have a cooling effect on me for the next 30 minutes.

As I approached the Mistletoe single track,  I was greeted with some cloud cover.  Instantly the temperature seemed to drop 10 degrees.  I felt great going through this 7 mile section of single track. The creek crossings were all shallow and rideable.  I did miss one turn during a creek crossing where I went wide left and ended up going left on the other side as opposed to right.  I realized my mistake pretty quick and only lost about a minute.


I only had to HAB a couple short, grunty climbs, the one after the ledgy drop into the creek and the other being the cross tie climb back up to the park entrance.  I passed a few more guys, one of whom gave me the biggest compliment of the day as I passed him on a climb while he was walking. The guys were most gracious today!

As I left Mistletoe enroute back to Purgatory Pasture, I looked at the time and realized that I was really close to my time from last year.  I knew I was a little slower, but with the reroute, the second half of the race was about 1-1.5 miles shorter.  So I challenged myself with another mini-goal:  try to beat last year's time.  After stopping at the fourth aid station, drinking a coke, pouring ice down my kit again, I struck off with a vengeance.

I was all spinny coasty on the 2 miles of slightly downhill pavement back to Keg, Whenever I would get my cadence up to 120, I would feel the burn in my quads.  I had to back it down a bit and just relax.  I had witnessed alot of racers cramping today, and I did not want to become a victim.  Entering the last bit of single track, I pushed on, eager to get to the rolling gravel that would take me home. Spirits were high, but legs were heavy.  Having ridden this section the day before, at least I had some sense of the distance.


The rolling gravel road back to WildWood Park and the finish was like a mini Dirty Kanza.  I would hammer the climbs and rest on the descents. Up, down, up, down ... "K to go" signs would pass by and on I plodded. I eventually caught up to a racer who I drafted behind on the descents and could eek out a few more mph.  As we were climbing one particularly steep hill, he happened to look down and see that I was single.  He said a few expletives, albeit complimentary, and then suddenly died.  I was on my own.

Once into Wildwood Park, I seemed to gain a few more watts and rode the last 1K as hard as I could. I was bombing down a double track descent just before the 500 yard to go mark when a deer shot across my path.  I closed my eyes for a brief second hoping that she did not have a friend that was going to plow me over.  Whew!  Close!

It was a little surreal crossing the finish line in 5:27 and snagging a stars n stripes jersey.  Three years of chasing my dream had finally come to a close.  I also managed to place third overall (5th, if you include the Pro division).  I would also like to give a big shout out to Rebecca, who had a hard day, but finished with a smile.  This lady, if you don't know, is one tough cookie.  She raced the Shenandoah 100 last year on a single speed; no small task!

My time was only 6 minutes slower than last year.  Not bad, given the Hades Heat!  I went through 180 ounces of fluid and it took two hours and two bottles of water before I had the urge to pee! 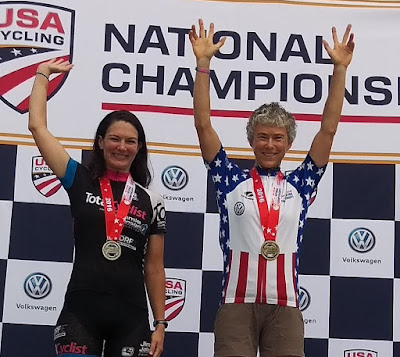 I must give a big shout out to the race promoter and the volunteers. There were quite a few hiccups last year, but all were fixed.  The course had tons of marshals and markings.  I only got off track once and that was my fault.  The aid stations had plenty of neutral support and were well stocked.  The t-shirts were made on site and you could choose your size and color.  And the Mega Slurpee I purchased with my meal ticket was icing on the cake! 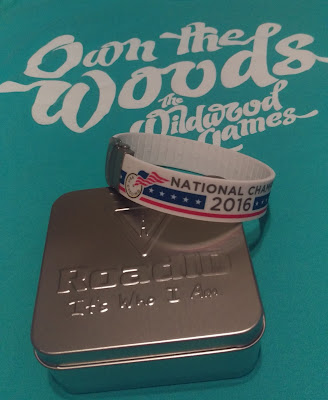