This was my 7th year racing (2007, 2008, 2013, 2016, 2017, 2019) the BBR.  The BBR is put on by my LBS, Scott's Bicycle Centre, and is in its 13th year. The course consists of all of the trails at the Ocoee Whitewater Center and is 95% single track.  This would be my last high intensity effort before the big one ... the Marji Gesick 100. Having not done much racing this year, especially on trail, I was a wee bit nervous about how the legs would respond and the skills at speed would fair.  It is one thing to race a gravel grinder which is akin to a time trial, but to have to put out constant intense power surges is quite a bit different and something I have just not done much of this year.

It was 65 degrees at the start and conditions had been dry all week, so it was gonna be fast.  I started out hard, making the legs burn going up the pavement climb.  Hard enough that I could not even talk to Loretta as I passed her.  My breathing was ragged and my heart rate above threshold, but at least the legs felt good.  I latched onto a dude (Marty) just as we crested the climb and was able to recover while maintaining speed down the paved road until we hit Brush Creek. Marty turned out to be a great pacer through this first fast slot car like section of trail.

As we approached the Boyd Gap descent, I jumped ahead of him and an older fella.  Not knowing them nor their downhill skills, I wanted both a clear field of vision and and a chance to go at my own speed.  This trail has several sections of loose baby heads and the chances of a catastrophic failure is quite high if you hit them the wrong way.  Within the first minute, I was afraid I had made a mistake, as the guys I passed were right on my heels.  I asked twice if they wanted around, which I would have humbly pulled aside, but both seemed to be cool to follow me.  As we hit the short paved descent to Old Copper Road, I did apologize to the older fella if I hindered his race.  He seemed to be just fine ... so I was hopeful I just made him faster by showing him the line.

My teammate Robbie Burger passed me just before we hit Old Copper Road.  He was looking really strong and took off like a bat out of hell.  I hopped in behind the guys I led down the descent.  The root section on OCR felt like an 8 second bull ride ... not that I know anything about that, but those roots had grown!  I biffed a couple of lines and was glad to not have gotten launched off to the left.
.
As I was climbing up Bear Paw, making good time and feeling strong, I had a twinge in my inner thigh.  It felt like someone had pinched the crap out of me.  Uh oh, that was my body warning me of a full on cramp if I didn't settle down.  I was completely surprised by the twinge as I am not a cramper and I cannot even remember the last time I felt "the pinch."  But boy did I back it off quickly.  Way too many miles left and not wanting to be one of those poor souls laying off in the woods screaming uncontrollably, I settled.

As tradition would have it Henry was in full Hawaiian luau mode at the intersection of FS1333 and West Fork.  Those coconuts!  Love ya Henry.  You are a wonderful trail angel, be it in full on trail work mode or morale booster mode.  West Fork and Thunder Rock seemed to fly by; a good sign of my fitness.  Even the gravel climb up to Poplar Hollow felt effortless.  I caught back up to Robbie, but he passed me back as I stopped to swap CamelBak's.  The last time I did the race there was a n aid station at the top of the gravel climb but not today.  But my other trail angel, THE Zekester, was there, having hiked all the way up the gravel with cooler in hand, so that I did not have to lug a full hydration bladder up that mile climb.  What a man! What a man!

I passed Robbie back as he stopped at the aid station before the Quartz Loop.  As I entered the loop, I was curious as to where my competition was.  Zeke had told me that I was about 5 minutes behind the top 2 ladies, but how close behind me were the ladies in my age group (>35).  I roared down Bypass and hit Riverview starting to feel tired  Tired, really?  I had only been racing for 2 hours!  Suck it up buttercup, I told myself.

I like riding it in this direction as it feels mostly downhill with the bulk of the climbing at the end.  Knowing that I had a long descent back to the Whitewater Center after that, I was able to dig deep.  Robbie caught back up to my wheel and we finished out this section together.  Nothing like having a teammate behind you to give you a little more motivation to ride fast and smooth.

Once I crossed the bridge over the Ocoee River, the last 10 miles was the first 13 in reverse minus the 3 mile initial paved climb.  I began to smell the barn.  I conserved a little on Old Copper and the paved climb up to Boyd Gap.  Climbing Boyd Gap is a bugbear.  Every year, it gets a little more washed out, the baby heads multiply and the roots get taller.  Keeping my head down with just enough field of vision to see a few yards ahead, I grannied the hell outta that climb!

Back on Brush Creek, I went into TT mode and made the final push to the finish.  With legs burning and eyeballs bulging, I imagined myself on the final miles of MG100, trying to make the 12 hour belt buckle cut-off. It worked, as I ended up not far off my best time for this section.

I won the 35 and over division with a time of 3:37:29.  Not anywhere near my fastest time, but right where I needed to be given the type of training I have been doing this year leading up to my A race, the Marji Gesick 100, which is coming up in 2 weeks.

Thanks goes out to Scott's Bicycle Centre for putting on yet another wonderful BBR.  The watermelon and the ice old Cokes at the finish line is a welcome oasis, before pedaling the pavement back down to the WWC.  The Dam Deli catering was spot on!  And I have one more podium glass to add to my collection! 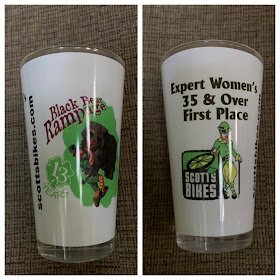