This race was a good mix of single track (16 miles), gravel(13 miles), ORV (4 miles), and pavement (12 miles).  The dirt bits were wild enough that I chose my hardtail with 2.0 Bontrager XR1's.  It had also rained the day before and I knew from pre-riding that there would be a 100% chance of mud.  Fortunately, even though there was a good threat of rain during the race, it amounted to nothing more than a 20 minute sprinkle.

The race started at the power plant and began with a 2.5 mile pavement climb to the single track.  Despite a warm up, my legs were NOT happy, and several women got ahead.  Surprisingly a few minutes later, they lit up, and I was back in it bridging the gaps.  I entered the single track in what I thought might be second place.

The first descent was a slip n slide and the dude in front of me got all noodlely in the ribbons of mud.  He made a surprising save right in front of me.  I almost followed suit, trying to avoid him, but managed to stay upright and not run him over.  I continued to follow his wheel, but at a safer distance. We soon came upon Tess, the first place woman.  The single track was tight in this area and I had to be patient.  When the trail opened up, we were able to get around her.  I wasn't 100% sure I was in first at this point, but it really didn't matter, as I just needed to ride my own race. 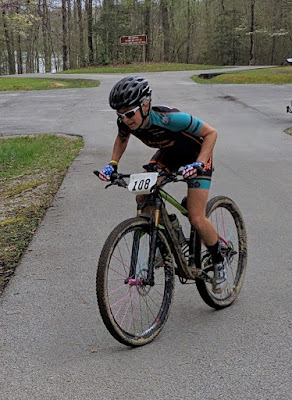 After listening to Mr. Noodles brakes squeal on the next two descents and feeling that I could go faster than he, I managed to get around him when the trail widened on a short double track section.  Now I was in my own element.  Legs were firing on all cylinders and the sweet ribbon of single track was mine alone to shred.  Some boys from the Union College soon joined me and I was happy to pull them along.

At mile 10, I popped out onto the road that went over the dam.  I was able to bridge up to two racers and together we alternated pulls.  The collegiate cyclists caught up to us and soon we were 5 strong, then 7 strong, as we made our way over to the Southern Loop, which was the gravel and Middle Mountain section of the course.

The gravel was fassst!  Hard packed with minimal rock, I was able to stand and hammer the climbs and make quick work of the flats and descents. I slowly rode away from the pack, as one by one they dropped off the back.  I rolled on past the 2nd aid station (mile 19) and hopped onto Rico's wheel, who gave me a free ride to Middle Mountain.

This section of the course is a rutted, mud-hole infested two track.  The type of place you would not want to be at night by yourself, seeing the multitudes of empty beer cans strewn about.  I settled down here and negotiated the mud holes carefully, not knowing how deep they were.  It was all about not touching the brakes and letting your front wheel meander.

About 2 miles in, I came upon a unoccupied Ford pick up, up to its doors in mud.  The dude must have either stolen the truck or been drunk to have ended up here.  I don't know what he was thinkin' as this path ultimately ends up with a Farlow-like descent down to another gravel road.  I am pretty sure the blue book value of the truck is not worth a tow outta here.

I began the gnarly descent confident, but 1/2 way down my monkey brain engaged and it was all over.  I suppose I am getting too soft, but I was just not feeling it on my non-full-squish-high-post-skinny-tire bike!  I hopped off, ran the remainder, which was just as fast as the dude behind me who cleaned it ... if that tells you anything.


Hit the gravel road and began pushing it hard again ... because I could.  I made it to 3rd aid station (mile 27), ditched 2 empty bottles, picked up my Infinit rocket fuel and downed a caffeinated gel.  Let's finish this strong, LAAGGZZ!

I was solo for this stretch, but just before the gravel ended and the pavement began, I spotted a racer ahead ... my carrot!  It took a solid 2 miles of head down TT mode, but I was able to bridge the gap.  Travis and I worked together over the next 3 miles of pavement back to the final 8 miles of single track.  We also managed to pick up Ty, the single speeder, and give his legs a bit of reprieve on the flats.

Entering the trail, I let Travis and Ty ahead of me. They were hammering it hard and it was all I could do to keep up.  About 1/2 way through, Travis' engine began to sputter and he let me around.  I hopped on Ty's wheel and held on.  In the last mile, Ty began running on fumes and allowed me to lead.  I caught up to Rico on one of the final climbs.  He challenged me to catch up to his buddy ahead. So I emptied the tank in the final 1/2 mile and hit the Slobber-Knocker climb with tongue hanging out and eyes bleeding, rolling across the finish line, 1st woman, in 3:20.

The bike race was nothing more than the qualifier to see who would get to shoot free throws for the Boondoggle Title Belt. Brian Schworm (Men's Open winner), the winner of the SS (sorry, forgot your name) division, and I were competing.  My only chance of ever beating Brian and I failed miserably: 2/5.  Mr SS won it with 3/5. Brian hit 2/5 as well.

Thanks Keith and all the volunteers for a well run event.  Course markings were on par.  The aid station volunteers were quick to respond to my needs.  And having a bike wash and a shower available at the end was a bonus!  Now, to just work on that timing system  😉 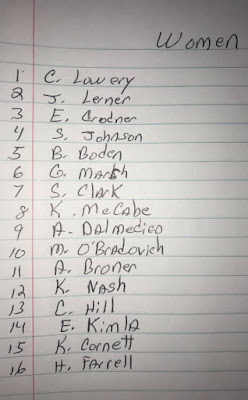 I was pleasantly surprised at my performance, given the back to back weekends of racing.  10 years ago, I would not have thought twice about this.  These days, however, recovery is much more of a priority.  This says something about my taking care of this body, as well as Coach Lynda's training plan.  I am not sure I will tackle anymore back to back weekends this year, but ya never know.
Posted by Carey Lowery at 10:43 AM
Email ThisBlogThis!Share to TwitterShare to FacebookShare to Pinterest