This is Chainbuster Racing's first gravel race in the Southeastern Gravel Series, a 3 race series.  I had not planned on racing this one, but it fell perfectly within a training block.  There is no better way to suffer through a threshold work out than this, along with those of like minds and legs, so I made the journery over to the comfy, cozy little town of Cornelia last Saturday.

I began to doubt my weapon of choice, when I started seeing an unusually high number of mountain bikes.  I had taken Lisa Randall's advice and brought along my Industry 9 equipped Cysco.  Well, at the very least, it would be a good day of skills work.

The start was on tight, twisty narrow pavement, followed by a long descent.  Having not raced in a pack for some time, it was nerve-wracking.  I chose to back off and not fight for the top 20 positions in the first miles of the race.  Although only 36 miles long, there was plenty of time to make a push. I chose to await the gravel and the climbs.  Besides, my legs were slow to come around, what with the punishment they took earlier in the week.

When I hit the first bit of dirt road, the pack was still thick.  I slowly weaved my way through racers as they struggled with the stutter bumps, pot holes, and millions of sweetgum tree seed pods.  I saw more than one racer go down on Mother Nature's "marbles."

My legs came around after 8 miles and I was slowly able to reel in the women ahead of me.  I had no idea how many there were, but focused on putting the power to the pedals.  There was a 1 1/2 mile section of single track to keep things interesting.  It was pretty mellow, save for a deep creek crossing and a grunty climb afterwards.  Fortunately, there was a racer just ahead of me who was my "gauge" for how to approach the water crossing.  It was deep!  The water was above my cranks and hubs, but I powered through.  Then I  had to keep the hammer down to make the technical climb back up to the ridgeline.  Thank God I have been single speeding and could muster the strength to push the pedals over the top and keep the bike moving forward.

On the 1 mile climb up to the top of Mount Curahee, I envisioned myself in full battle gear with a 30 pound pack, M-16, and boots provided by the lowest bidder, shuffling up to the top (been there, done that at Fort Jackson, Fort Leonardwood, and Fort Bragg).  That mentally made it a helluva lot easier to claw my way up on a 18 pound bike.  On the way up, I saw two women in front of me.  Carrots!

Making my way back down the mountain was more difficult, what with all the stutterbumps.  I thought my eyeballs were going to rattle out of my head!  Finally a smooth surface, and my brain could quit sloshing back and forth in my cranium.  The next few miles were a mix of smooth gravel road and rolling double track.  Somewhere along mile 22, I began doubting as to whether I was still on course.  I was pretty sure I was, but not seeing any confirmation tape had me a little worried.  I hate this feeling as I tend to come off the gas a bit and spend more time looking at the road's shoulder rather than where I wanted my wheels to go.  Finally, I saw a large mud bog with enough bike tracks to convince me I was on course.

Soon afterwards, I saw a competitor up ahead about 30 seconds.  I put forth a little more effort, despite my legs disapproval. She was with another racer and staying tight on his wheel. I also had a partner and together we worked to reel them in. We would catch glimpses of them as the road straightened out and were gaining precious seconds.

At mile 28, we came to an intersection in the road with nary a sign.  Oh ... crap!  There were 3 possibilities.  I quickly dismissed the far left as it did not look well used.  So I was left with the opportunity to go left down the hill or go right up the hill.  After what seemed like an eternity, but was really only 20 seconds, I chose to follow my the racer I was working with down the hill.  For the next few minutes I was dreading having to climb back up this road if indeed it was the wrong way. Finally I saw a ChainBuster sign!

The gravel turned to pavement as we made our way through the Lake Russell Recreation area.  My cohort and I continued to work together, but I could tell he was tiring.  I about blew through the right turn up onto an old decommisioned road bed, thinking that the turn was further up ahead.  How I could think that despite ALL the signage there along with hay bales, I don't know.  I suspect it had something to do with a zone 5 heart rate.

We pulled each other up this road and then hit the main road back to town.  Still going up!  I could see her and her cohort again, still about 30-40 seconds ahead of me.  The climb was brutal and my partner popped off my wheel. I could dig no deeper and watched her crest the hill for the final descent back to town.

Thankfully I did not get stopped by the train (which came by a minute after I had crossed the tracks). I rolled under the Maxxis finishing banner in 2:33:23, 29 seconds behind her.  At this point I thought I was in third place, but when the results were posted, I was second!  I can only assume that one of the women who I saw bombing down Curahee Mountain had gotten off course.

Apparently some "waste of my oxygen" hooligans had taken down the course markings at the intersection at which I had stopped. There were many who had gone off course.  I really hate that this happened, but know that this possibility exists.  I was lucky I had chosen to go left as I had not pre ridden the course, nor had downloaded it to my GPS.  I know that Eddie was extremely frustrated and upset over this.  As much as it is up to him to do everything within his power to reduce the risk of shit like this happening, it is as much our responsibility to do everything within our power to know the course.  I am sure that next year Eddie will probably have more confirmation tape and perhaps send a volunteer out to drive the course and check the course markings the morning of the event.

Afterwards, all racers were treated to free Terrapin beer and an awesome meal at Natalie Janes, which I took home and my daughter devoured! 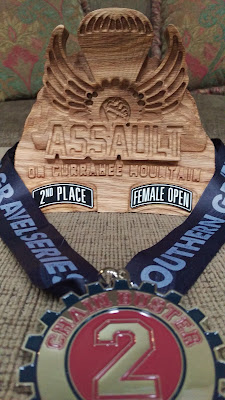 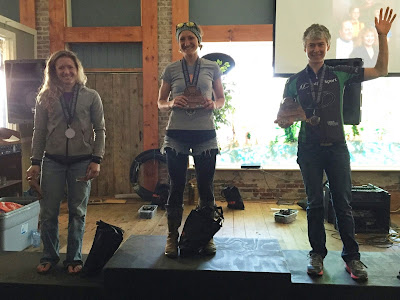