This past Sunday was the Southeastern Regional Championship XC finale in Fontana, NC.  I had a fairly intense week of training, including VO2 max intervals on Tuesday and riding the Cohutta Death Loop at race pace on Thursday.  Coach had a SS session on Sunday.  Since there was this race, I decided I could have a better work out if I was forced to go hard.  Coach called it "squeezing blood out of a stone."

I decided that I wanted to race for money and with more competition, so I entered the Women's Pro/Expert class.  No more large T-shirts and Entemann's mini-muffins, I was going for cash!  12 of us lined up at the start.  Wow!  That says a lot.  A few years back when I raced XC, we were lucky enough to have 5 or 6. 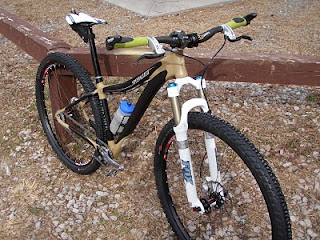 I chose a pretty easy gear for Solo, my Specialized 29'r SS.  Each 7.5 mile lap had about 1000 feet of climbing and some of those climbs were pretty steep.  When the gun went off, Anina and Kim took off like bottle rockets.  The start was a 0.3 mile 10% paved climb.  I tried to go with them, but my legs filled with lead and I had to back off.  I was still able to head into the single track in 3rd, with quite a gap on the rest of the field.  I was able to keep the Vantaggio ladies in sight for a while, but I had to back it off a bit about midway through the first lap, or I was going to blow up.

The second lap hurt!  I swear the climbs, especially the gravel road in the middle, got longer and steeper.  I was able to hone in on my hike-a-bike skills in several spots.  I tried to make up some time on the descents.  The lines were there ... all I had to do was follow them and keep my fingers off my Magura's.  I don't think I was all that much slower on Solo on the descents as compared to my Era.

The third lap felt the easiest.  After racing for almost 80 minutes, I guess I had finally warmed up.  People on the trail kept telling me that Kim was just up ahead.  That encouraged me to enter deeper into the pain cave to see if I could possibly reel her in.  I just about got too crazy as on the final descent, I hit a jump faster than on the first two laps.  When I came down, my left foot came unclipped and I got all "squirrely."  I almost grabbed too much front brake!  After that wake-up call, I settled down for the remainder of the descent.  As I was climbing up the last bit of pavement to the finish, I saw Kim ... as she was rolling through the finish.  Arrggg!  If we only had to do 1 more lap ...

So I finished third and collected enough money to pay for my entry as well as the gas to get there.  And I do believe that the stone did bleed!  A perfect way to wrap up a good week of intensity.

I have really enjoyed racing my SS at Raccoon and Fontana.  Hmmm ... how can I work more of these XC events into my schedule next year?
Posted by Carey Lowery at 2:54 PM
Email ThisBlogThis!Share to TwitterShare to FacebookShare to Pinterest
Labels: magura, racing, single speed, Specialized